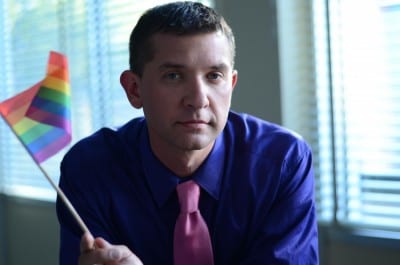 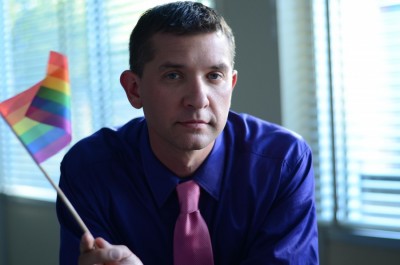 In 1967, some schoolyard bullies at Smythe High School in rural Tennessee, seeing a fellow student they decide is “queer as a three dollar bill,” set out to bash him in a schoolwide event. Then in 1972, a new set of kids plan the same. And again 1976. And 1983. And …

The history of using the locker room wall as a clearinghouse for hatred finally ends in 2014 with a conscientious principal who paints over it. But not all progress is so easy.

Tennessee Queer — which plays for a single showing tonight at the Texas Theater at 7 p.m. — tracks the long journey for gay Jason (Christian Walker) who happily escaped Smythe to the lights of NYC. When he returns home for an intervention, he’s surprised to find it’s for him — not to cure the gay away, but to get him to move back to town and live with his supporting family who accept him unconditionally.

This indie film — low-budget but lovingly made — is a sweet-natured comedy with heart … I know, a cliche when it comes to gay cinema, but not a bad one. It’s about the real stresses of dealing with well-meaning family members, whether gay or straight. But politics and religion enter into the story when a politician (clearly closeted) tries to run for mayor on a “morality” campaign and shows the town isn’t as progressive as it seems.

“Smythe is still Smythe, and being gay is the worst possible thing to be,” the principal tells Jason. It would be nice if he could help make things better for the students.

If a little two-dimensional and sitcom-y, Tennessee Queer has a positive message about tolerance, and tackles gay pride in a creative and entertaining way. Especially for those who grew up in small-town Southern culture, it resonates as a hopeful story of acceptance … even if less ideal than the reality.