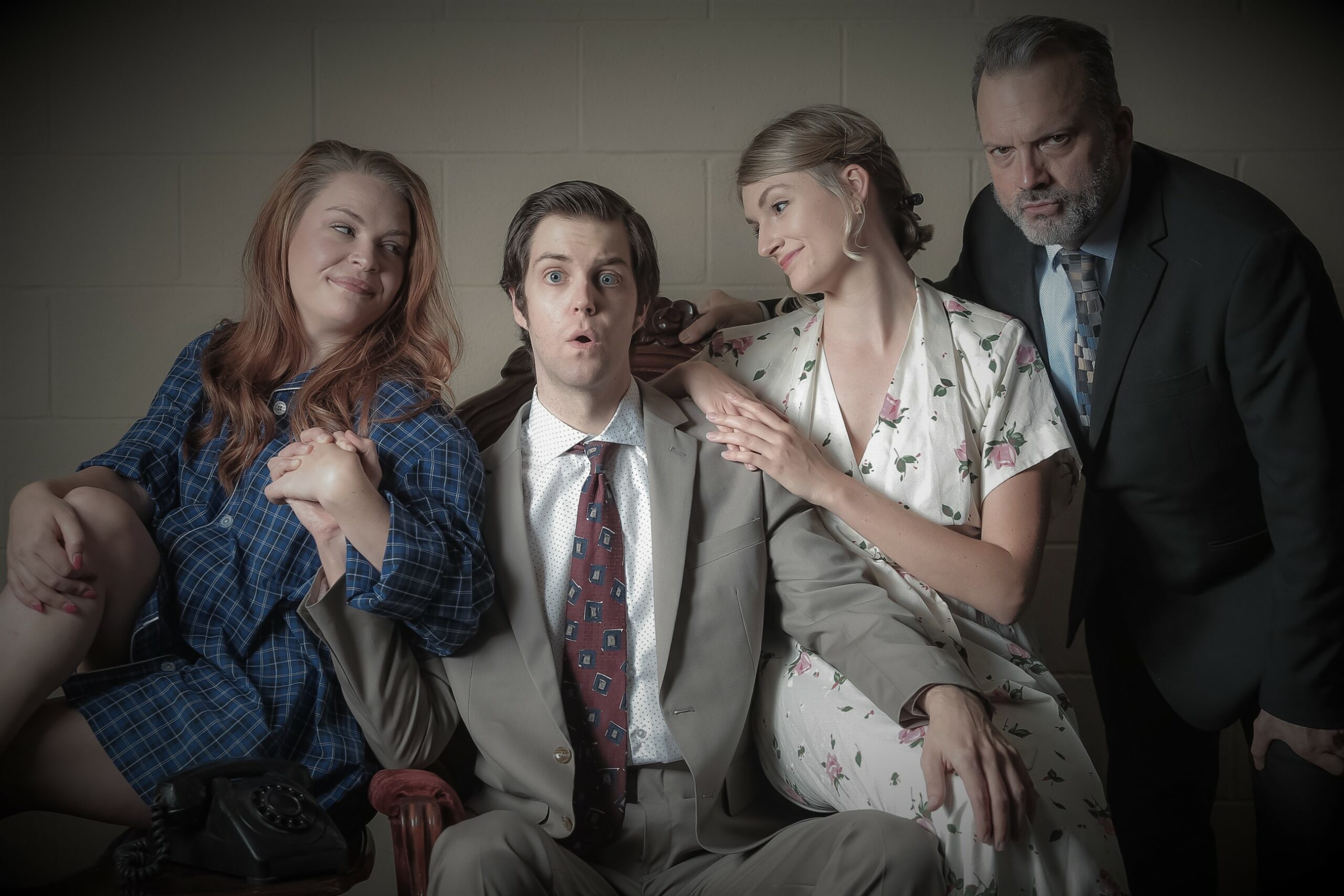 Theatre Arlington seems to do really well with humor. Following up a hilariously strong production of The 25th Annual Putnam County Spelling Bee, they finish up its one-two punch of laughs with Peter Shaffer’s Black Comedy. The show opened last weekend and closes Sunday.

Which means, for a good time, call TA stat.

Directed by Sharon Kaye Miller, the British farce was a sharp and clever comedy centered on the gimmick, if you will, that a power outage has turned everything pitch black. Not to worry, the stage is fully lit with that understanding.

Brindsley (Micah J.L. Brooks) is a mild-mannered, Beatles-esque looking artist who lives in a not-so-impressive flat. He and his girlfriend Carol (Alli Franken) are readying the apartment with borrowed furniture from the vacationing neighbor’s apartment. Harold (Micah Green) has much more stylish furniture due to his interest in antiques. All this is to impress the art collector George Bamberger (Kelley Garland). But in the dark, guests stop in such as the neighbor Miss Furnival (Hannah Bell), Carol’s father Colonel Melkett (Jakie Cabe) and Clea (Jenna Anderson) who is also Brindsley’s girlfriend?

Although written with sharp wit, the humor rested on the physicality of the cast. The contortions and navigation each actor performed was done with such fluidity and the right amount of clumsiness that nothing ever felt blocked or choreographed. Laughs aside, that alone was a remarkable feat for everyone that had to “blindly” walk through furniture, up the stairs and into just-misses with other actors. 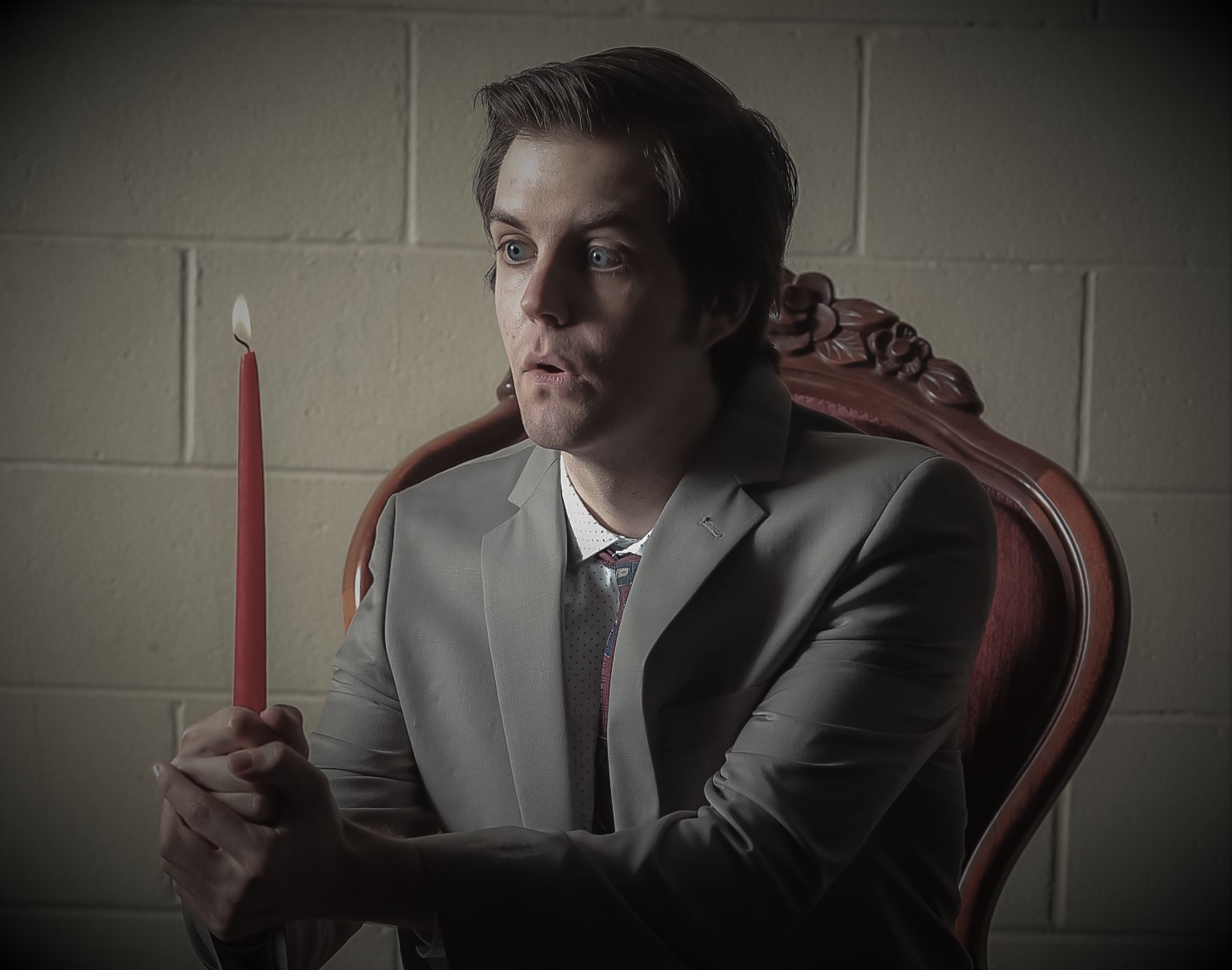 Brooks was a smart lead and emanated Brindsley’s neuroses as the night went on with aplomb. Franken shifted her character from a fairly calm and collected one to Carol almost catching Brindsley’s nervous behavior as if it was a cold. The two had nice chemistry and even functioned like a couple as they tried their best to entertain guests.

Although the colonel would seem to be the show’s straight man, Cabe fused strong comic timing with a stoic delivery. He certainly vibe-checked his part to add to the show’s humor.

Even with all the actors at the top of their game, Bell managed to steal all her scenes as her character who doesn’t touch the stuff discovered an unexpected love for gin — or maybe vodka — and a whole bottle’s worth. Drunk acting can be hit or miss, but Bell kept the volume on her performance at the exact level she needed and fluctuated with her surroundings.  With all these actors already delivering big laughs, Green’s eccentric Harold was just a ricochet of gestures and looks and old British queeniness that never let up. Between he and Bell, this dynamic duo probably had the flashiest parts and they did not disappoint.

As Clea, Anderson had to walk into the established scene of the cast already onstage so she had some catching up to do. Her “blindness” didn’t quite match the vibe the audience was used to already by the cast preceding her. Her character was somewhat resigned to the upstairs bedroom in the first act, but she redeemed herself with a titanic second act performance.

Rounding out the cast was Garland who served as a late show walk-in to round off the story and Andrew Nicolas as Schuppanzigh, the electrician mistaken for the art collector.

The two-level set painted the picture of this English flat even with a hallway and next door to Harold’s apartment. While never crowded, the apartment felt cozy which made the furniture moving seem difficult. Bryan Stevenson’s set was certainly clever in making it all possible.

Black Comedy seems like a play any company could put on, but in the hands of Theatre Arlington, the show was a definitive comedic experience.