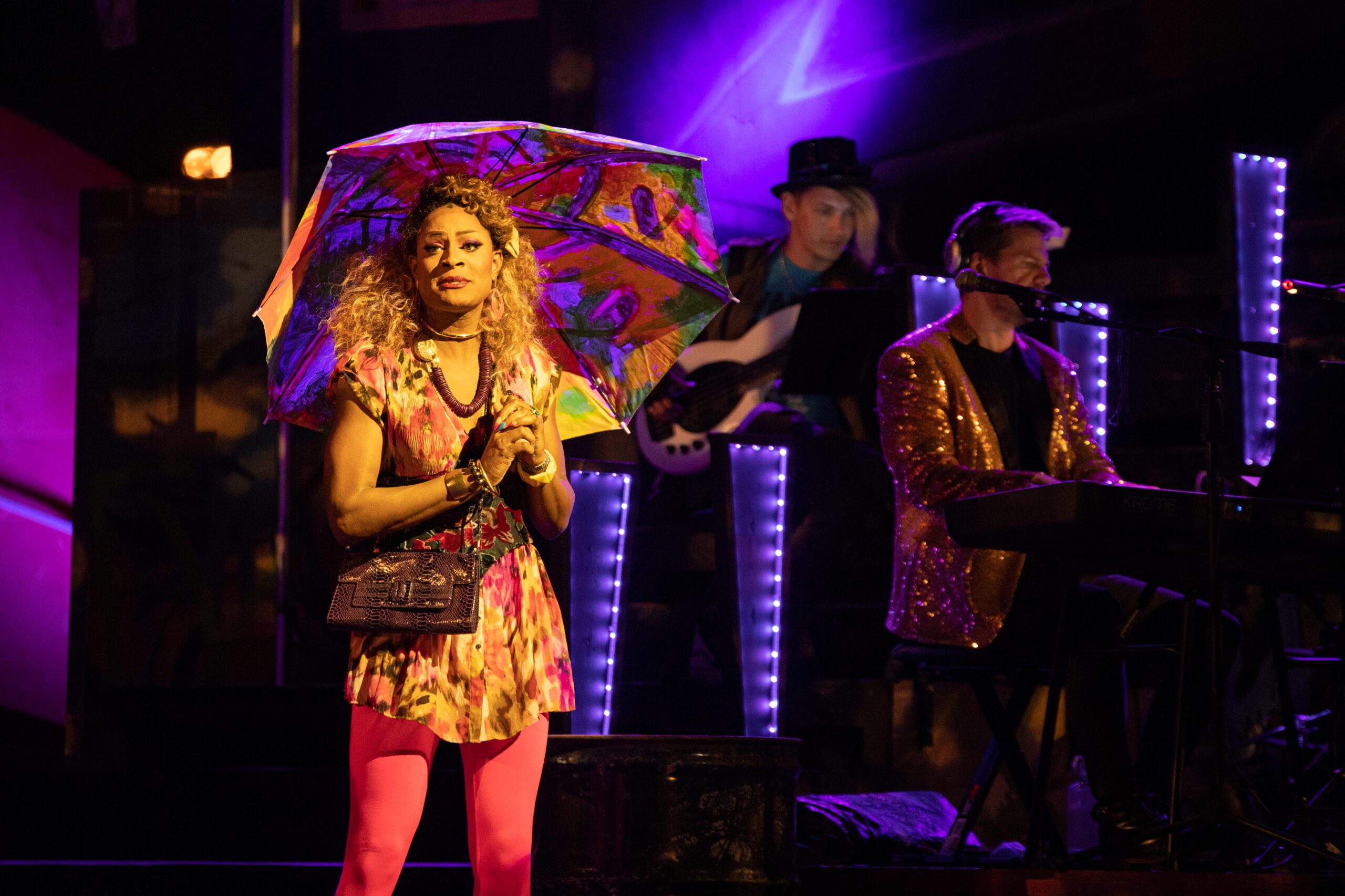 As its home in the Quadrangle is under construction, Theatre Three has been on tour (if you will) around Dallas with outdoor performances. Landing at Samuell-Grand Park alongside Shakespeare Dallas’ Romeo and Juliet turned out to be a perfect fit for its current production of Little Shop of Horrors – and in October no less. Cooler evenings, a colorful stage and stellar performances helps make this Little Shop a big deal.

Alan Menken and Howard Ashman’s comedy musical follows the nerdy, meek Seymour (Alejandro Saucedo) who works in Mr. Mushnik’s (Bob Reed) flower shop alongside his crush (Audrey) Lee Walter. Determined to make a name for himself, Seymour discovers a new plant that he names after Audrey but ultimately has dire consequences for everybody on Skid Row where the shop is located. Audrey’s abusive dentist boyfriend Orin (Parker Gray) doesn’t help make things easier. Once Seymour’s new plant grows above and beyond expectations, Audrey II (Rodney M. Morris) has plans of its own.
Immediately, upon finding a seat on the park lawn the show makes a strong impression.

The set (which is shared with R+J) was a bright and colorful spectacle for the eyes. The band and some of the cast flittered about the stage interacting with the audience as if gearing us up before the opening number.

The trio of Chiffon (Nikka Morton), Crystal (Cherish Robinson) and Ronnette (Audra Scott) kicked off the show with the title number that whipped the enthusiastic opening night audience into a frenzy. That energy – from both the audience and the cast – kept the performance fully charged. Well, that and the dynamic band on stage which was as much a part of the goings-on in the show.

Although likely considered a classic now among the musical continuum, Little Shop never had that grand polish of many of its Broadway counterparts. Director Joel Ferrell (along with scenic designer Jeffrey Schmidt and costume designer Natalie Rose Mabry) helmed the show with a scrappier feel. The edges were appropriately and wonderfully rough for its Skid Row setting. The cast was equally so.

Seymour’s arc from nebbish shop guy to a man in love and questionable decision-making local celebrity was quite a ride thanks to Saucedo’s performance. He never let up on the character’s clumsy physicality which made Seymour additionally endearing.

Walter talked before how Ferrell wanted them to bring their own take on Audrey. Walter played Audrey as a trans woman which added some gravitas to her interaction with Orin, but overall, Walter’s bombshell choices worked wonderfully against Seymour’s nerdiness.

Reed’s blustery performance as Mr. Mushnik was fun to watch as both the shop owner and parental figure. He certainly had some moves as well with Ani Vera-Hernandez’s choreography. Gray ran away with his performance as Orin that was physically over the top in all the best ways. There are no words for his gas mask performance — and that’s a compliment.

Morris’ Audrey II was a nice departure from an often-imperious depiction. The plant’s still pushy but how Morris infused a bit of tenderness was a fascination. The puppet’s construction and design had slightly unique touches without straying from the usual and puppeteer Ben Stegmair skillfully animated the massive plant.

Finally, as the show’s Greek chorus, Martin, Robinson and Scott were knockouts from the opening number. All vocal powerhouses, the trio had many deserved spotlight moments.

T3’s Little Shop of Horrors was simply an enjoyable delight that worked so well in the outdoors setting. Some snacks, sips and a blanket definitely helped for a lovely experience under the stars. But if the trees, shrubs and grass start acting up, blame the plant. 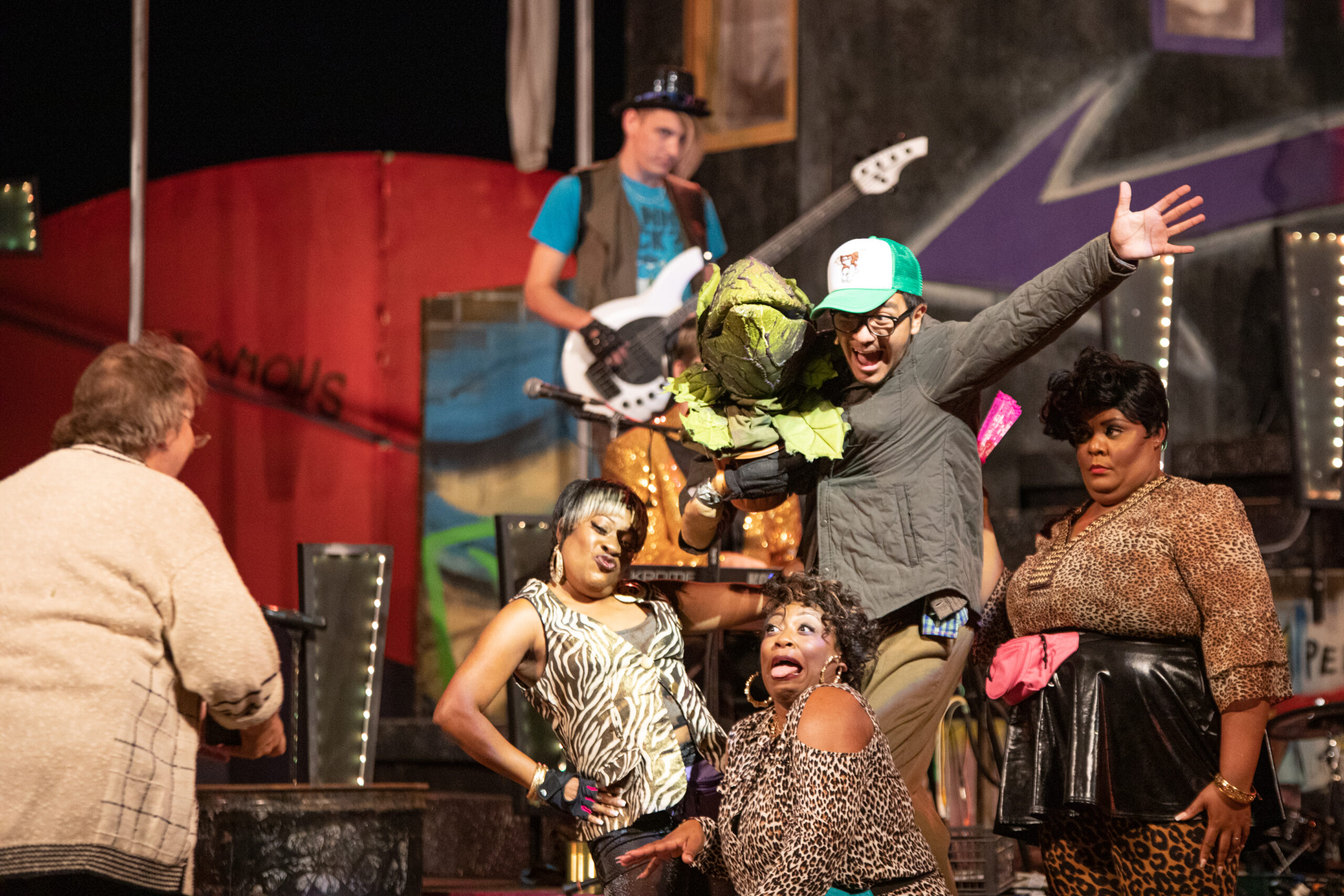 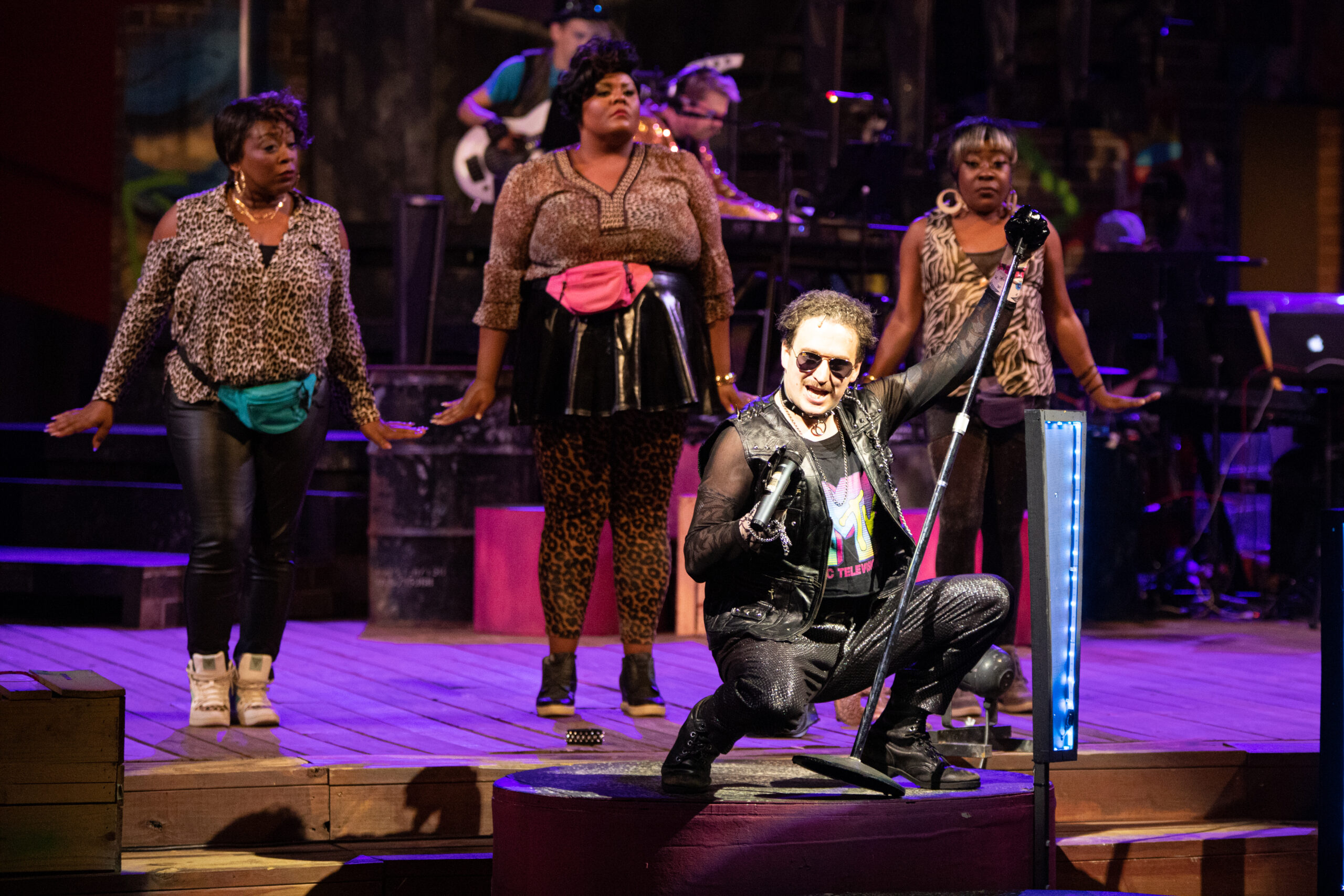 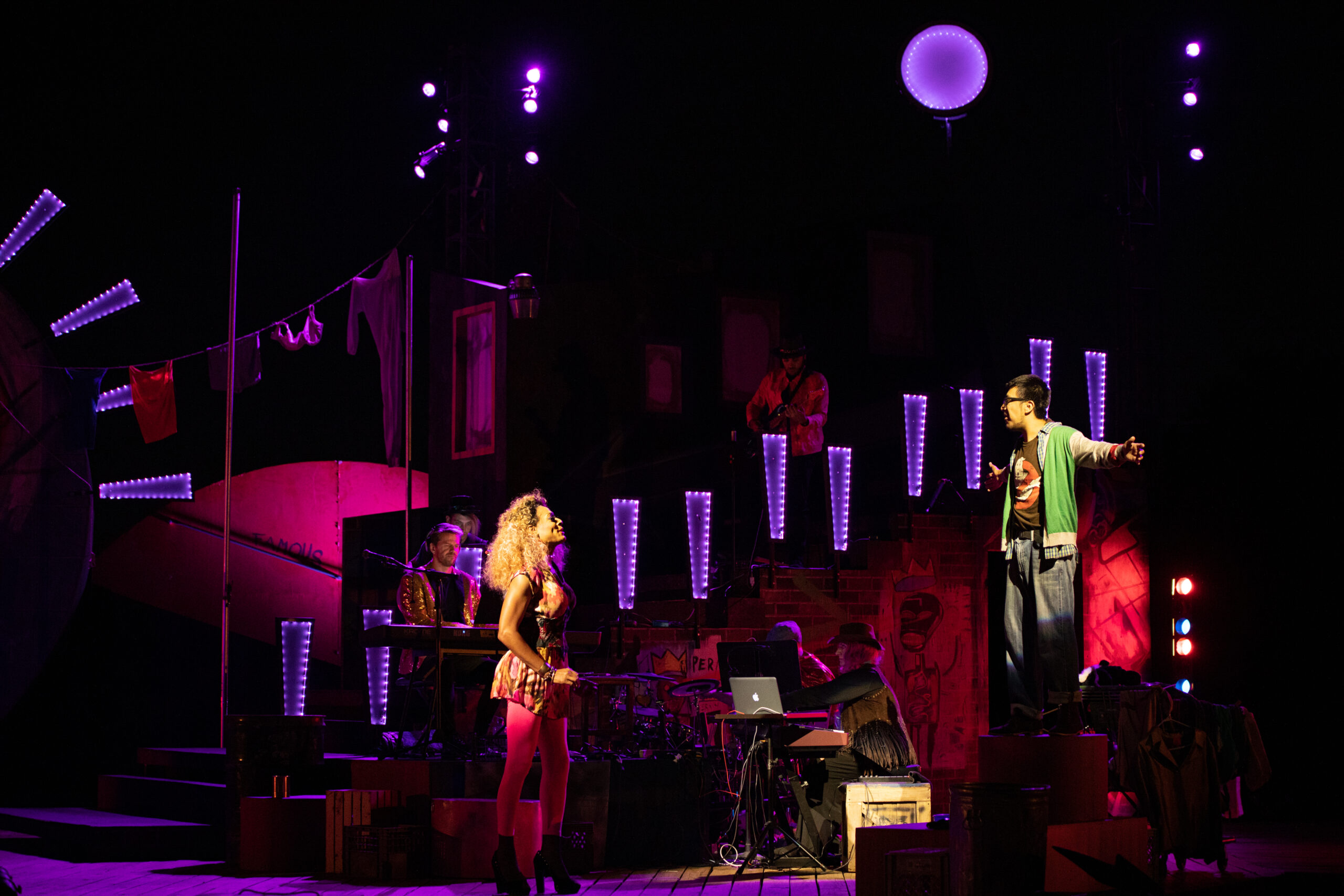