Rep. Jessica Gonzalez to be featured on ‘Prideland’

Two segments of the PBS documentary Prideland were filmed in Dallas in January — one at the National LGBTQ Task Force’s Creating Change conference and one profiling state Rep. Jessica Gonzalez from Oak Cliff.

Dyllon Burnside from the FX show Pose hosts. The series highlights personal stories from various LGBTQ communities across the South.

Gonzalez said she talked to Burnside about being Hispanic, lesbian and a woman beating a longtime incumbent to become a state representative. She and the crew were introduced by Human Rights Campaign’s Rebecca Marques at Creating Change.

From the Sheraton where the conference was held, Gonzalez took Burnside and crew for a tour of her district.

“I showed him some cool murals in Bishop Arts,” she said. She showed him gentrification going on in North Oak Cliff. They sat down and talked at Mercado369 on Jefferson Boulevard.

“The goal was telling my story,” she said. 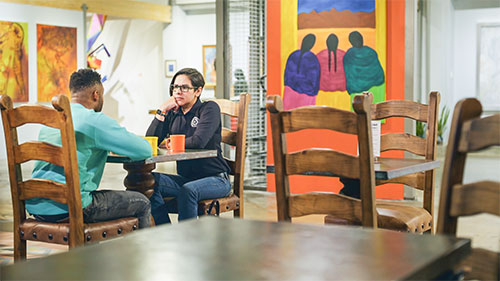 Part of that story, she said, was growing up in her family’s Mexican snack business, and she’s disappointed that didn’t make it into the documentary. “It instilled my work ethic and values,” she said, and working together brought her family closer together.

Gonzalez tells the story of being outed to her mom, who then told her to be herself. She credits her mother’s reaction with empowering her.

When she decided to run for the Texas House of Representatives, Gonzalez had never come out to her father, at least not in words. When she brought up the subject, he embraced her as well.

She also talked to Burnside about walking into the Texas House for the first time: “What am I in store for?” she remembered thinking. How would she be accepted in the Republican-held Legislature?

House members sit at desks that are pushed together in pairs. Gonzalez’s seatmate for her first session in the Legislature was Mary Gonzalez, the pansexual legislator from El Paso. Mary was the lone LGBT legislator for two sessions, until she was joined in the House by Austin’s Celia Israel. Jessica joined them along with two other LGBTQ women — Julie Johnson from Dallas and Erin Zwienner from Driftwood.

These five women created the first LGBT Caucus in the Texas Legislature. Gonzalez said having the other four women there made the session easier. 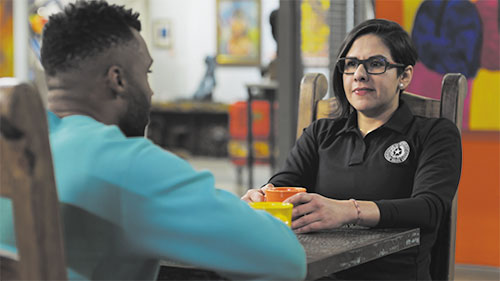 But Gonzalez soon made friends among some of the LGBT community’s biggest opponents. On a night the House was debating the budget, she said, there’s a picture of her with Reps. Tony Tinderholt, R-Arlington, and Valoree Swanson, R-Spring, two of the Legislature’s far-right members. “We’re cracking up about something,” she said.

And then there was the time she was in the members’ lounge and Rep. Jonathan Stickland, R-Austin, tried to set her up on a date with his sister. Gonzalez said she wanted to understand how he could care about his sister enough to try to get her a date but then vote against her interests and safety.

“I’m not effective if I don’t talk to Republicans,” she said.

Through her first session in the Legislature, Gonzalez learned how important it was that she and other members of the LGBT Caucus were there. The five women humanized LGBTQ people, she said, and the fight became about issues rather than types of people, something different than it had been in the past.

Gonzalez said her story will be told on Prideland through video taken while she and Burnside toured her district and through photos of her family, photos from her campaign and a few photos of her at work in the Legislature, contributed by Dallas Voice. Those photos include the first picture taken of the LGBT Caucus as a group.

She said she also talked to Burnside about what she’d like to accomplish in her next session. Gonzalez will return to Austin in January, because she’s running for re-election unopposed.

Last week, Gonzalez introduced a comprehensive nondiscrimination bill that she’ll file as soon as she’s officially re-elected. If passed, it would provide statewide protection for LGBTQ Texans in employment, housing and accommodations.

Most bills aren’t proposed until after the Legislature convenes. Gonzalez put her bill out there this early, she said, to begin a dialogue about it.

“You can’t shove a bill like this through,” she said.

She’s already gained bipartisan support. Rep. Rafael Anchia, the Democrat who represents most of Oak Lawn, jumped at the chance to co-sponsor the legislation. So did the dean of the Texas Legislature, Houston Democrat Rep. Senfronia Thompson, whom Gonzalez affectionately refers to as Ms. T.
But two Republicans have also stepped up as co-sponsors — Rep. Sarah Davis of Houston and Rep. Todd Hunter of Corpus Christi.

In all, Gonzalez has already lined up six co-sponsors.

After introducing her legislation, Gonzalez and Equality Texas put out an economic report supporting passage of the bill, written by respected Texas economist Ray Perryman.

According to the report, if Gonzalez’s bill passes in 2021, having statewide nondiscrimination will result in adding $20 billion in gross product, adding 180,000 new jobs, $2.8 billion in state taxes and $2 billion in local taxes in just four years.

Having nondiscrimination legislation in place would add $105 billion in gross product, 700,000 new jobs and $74 billion in state taxes and $56 billion in local taxes by 2045, Perryman’s report says.

How hard would it be for legislators to convince their constituents to support a vote for the bill?

According to Texas Competes, 70 percent of Texans already support nondiscrimination laws, and that includes people from both parties and among all major religious groups.

The bill was supposed to be rolled out by Gonzalez and Equality Texas at Austin’s SXSW, but that was the first major event in the U.S. canceled due to COVID-19.

Gonzalez said she’s participated in a number of discussions about what the next session will look like.

There’s talk of limiting the number of people on the floor at a time. She doesn’t know how limiting that personal contact will affect the outcome of the bill.

But she’s optimistic: “I’m going to continue reaching out to my Republican colleagues,” she said.

“Everyone knows someone who’s gay.”

After the one watered-down religious freedom bill that came to the floor of the House in the last session, she said, “Some Republicans wouldn’t look me in the eye. They didn’t feel good about their vote.”

While nondiscrimination will be her top priority in the 2021 session, Gonzalez said she is considering what other bills to file. Among those she plans to refile from last session is a human trafficking bill that was self-funding. Another is a criminal reform bill that Dallas County District Attorney John Creuzot testified for.

She’s concerned with trans kids’ safety as well as their right to participate in school sports and is considering what legislation might pass.

As far-reaching as her nondiscrimination bill is, Gonzalez said she believes this is a good time for it to pass. “I don’t see a state leader saying, ‘I want to discriminate and don’t want to pass something that will promote growth,’” she said.

As for Prideland, Gonzalez said she is proud to have been asked to be part of it. She added that she hopes younger LGBTQ people will watch it, and she can inspire them to understand what a positive part of their life being LGBTQ can be.