Relationship goals? Set ones that work for you

How do you look up to couples when you don’t know any happy ones? #RelationshipGoals have always been tricky for me. For years I’ve found it hard to find truly monogamous, happy gay couples to look up to, to see and think to myself, I want to be like them. 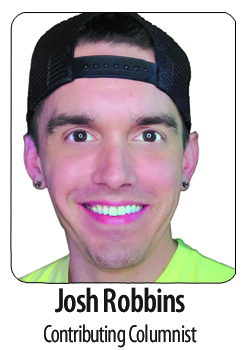 Is it because I judge these relationships by a set of standards that aren’t really intended for gay couples? Is it just that straight couples are just better at pretending?

I’ve been in closed and open relationships. I understand why people would want either one.

Some people think monogamy isn’t realistic, so why not avoid cheating by just being open about it? How can we expect one person to fulfill all our needs?

It sounds great, but I’ve seen relationships fall apart despite all the supposed freedom. Jealousy can still manifest, especially if boundaries and conversations aren’t happening.

I’ve seen people act dishonestly toward their partner, using an open relationship as a way to shut someone out or transition into a new relationship altogether.

I also respect people who say they need one and only one person to be their main squeeze through life. Well, we all know what can happen there: break-ups, divorce. And whether it’s because of money problems or cheating or years of resentment, it’s devastating to lose that person.

But worse than a breakup is seeing someone stay in an unhappy relationship that isn’t healthy. I’ve seen many friends in codependent relationships who have so much trouble getting out of them, because maybe the person was their first love or because the sex is the best or because when it’s good, it’s so good — that one is a classic line.

Seeing friends go through love drama and going through it myself, I’ve learned over the years that I need authenticity and, most importantly, transparency. I learned that I can’t get bogged down by over-thinking the rules of my next relationship before it even begins.

So, I decided to switch up my thinking. I was gonna look for someone who understands that the rules are always subject to change — as long as we both agree and regularly check-in.

So how do you get that perfect relationship without good role models? Read about it!

The Ethical Slut by Dossie Easton and Janet Hardy describes such negotiations between couples and is a must-read. The authors emphasize that as long as the couple maintains communication and flexibility, the relationship can still thrive, despite jealousy and times of anger. Don’t worry about doing what everyone else does. It’s your relationship.
Damon Jacobs is a known PrEP activist and a licensed marriage counselor. He’s someone I like to bounce ideas off of from time to time. One time I asked Damon if he had ever seen a successful married gay couple who had chosen to live apart, each person in their own places. He told me that, in fact, he has seen such a couple, and the arrangement was working well for them.

We so often associate living apart as the step towards separation and breaking up, but for this couple, living apart made them happy. It all goes back to: As long as it makes you happy, who cares if it’s not exactly typical?

Take advantage of online dating. Creating a good online profile can help you meet like-minded flexible people. Dating.com Group has tons of sites for every kind of person seeking out every type of relationship imaginable.
Give it a try! I did 😉

Josh Robbins is a spokesperson for Dating.com Group, an award-winning sexual health advocate, and author of the site imstilljosh.com. He was nominated for a GLAAD media award in 2017 and recently won the National Lesbian and Gay Journalist Association’s Excellence Award in the blogging category.