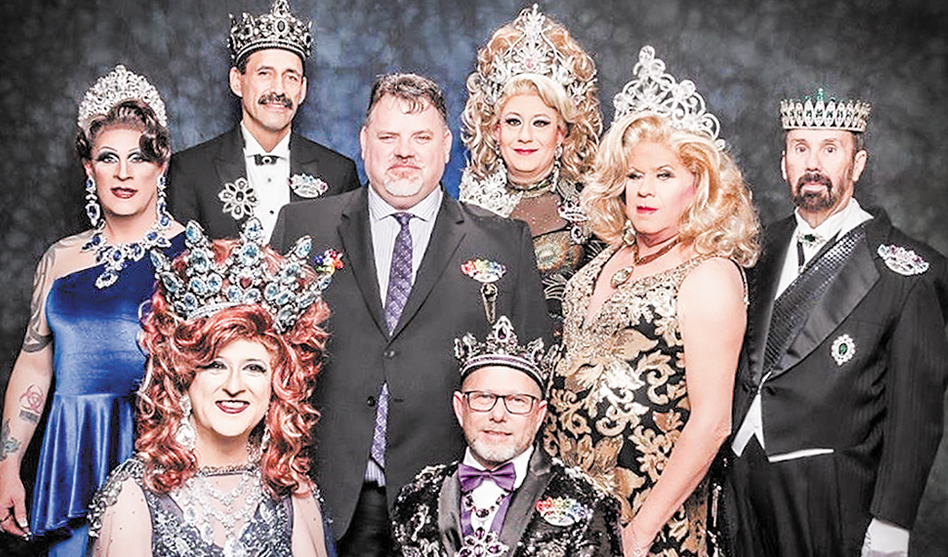 Larry Carter and Penny Cilyn end their years as emperor, empress of the UCLSE

It’s been a busy year for Larry Carter and Penny (Gary Allinger) Cilyn, emperor and empress 44 of the United Court of the Lone Star Empire. And although the two will step down as reigning monarchs of the court in just over a week, their duties to their realm will continue.

Their job is to act as counsel to the reining monarchs and to review all applications for UCLSE membership.

But before they step down during Coronation 45 on Oct. 26, Carter and Allinger have a lot left to do, they said, to prepare for the gala weekend.

Becoming a member
People sometimes shy away from becoming UCLSE members because, Carter said, “People think being a member means always being in crown and gown. They think you have to be a drag queen or some kind of entertainer, but you don’t have to be those things.”

Allinger added, “When you apply for membership, you select the level of membership you are interested in. You can be a supporting member or you can go all the way up to joining the royal family.” But if you want to eventually become the emperor or empress, you need to plan on being as active as possible within the organization.

Once you apply for membership, the membership votes on whether to accept that application. Once your application is accepted, you start helping raise money. That means hosting your own fundraisers — be they drag shows or cook-offs or something else — and you participate in other people’s fundraising events, too.

The reigning monarchs
Carter and Allinger were the only candidates last year for emperor and empress, when around 175 people cast ballots. But while it might seem they were shoo-ins to win, Carter explained that it isn’t so cut and dried. A candidate has to receive at least 50 percent of the votes cast plus one more vote.

And people who vote can cast a “no” vote. If the candidate doesn’t hit the 50-percent-plus-one threshold, someone from the College of Monarchs steps in to serve as a regent for the year.

Carter and Allinger — known respectively as His Most Imperial Majesty, Emperor 44 of Dallas and All Northeast Texas, Larry Carter, and Her Most Imperial Majesty, Empress 44 of Dallas and All Northeast Texas, Penny Cilyn Carter — began their reign last year with some very definite goals in mind. As they get ready to step down next weekend, they said they believe they have accomplished those goals.

“Our actual role is to spearhead the fundraising efforts, to manage fundraising events, and to mentor members. Our job is to guide the membership,” Allinger said. And increasing membership has been one of their primary focuses over the last year.

“We have seen a real influx of new members as well as seeing some members who have returned,” Carter said. “I think we can safely say we’ve had a record year in terms of membership, and that was one of our main goals.”

Allinger continued, “Collectively, Larry and I have been members [of the Court] for many, many years. In fact, we first met each other at the beginning of [Carter’s] membership, and we saw in each other the commitment to the community and the passion for helping others that we each already had.”

Carter and Allinger pointed out that emperor and empress candidates do not — and in fact, are not allowed to — campaign as a team. They have each campaigned for office once before, and both lost. “But we came back and were blessed enough to be elected this time. And to be elected at the same time is even more significant for us,” Allinger said.

The two started their reign with a mission, “and our fire, drive and passion for that mission has gotten stronger ever since,” Allinger continued. “We are really proud of the membership growth we have seen in the last year, and we are working to secure that mission and see it carry on for decades after us.”

Carter said that adding new fundraisers and diversifying the kinds of fundraising events the court holds has been another goal that he and Allinger have accomplished over the last year, noting, “We had a record number of events this year.”

Allinger added, “We had a lot of members who wanted to host fundraisers this year, so we found every opportunity to capitalize on that. Attendance this year has been great.”

Both Carter and Allinger are also quick to thank the businesses that helped make their year in the crowns a success. “In order to raise a dollar, we have to have someplace to do that,” Carter said. “The Dallas Eagle is our home bar, and they have given us Sundays to hold events. It can be a struggle though, because a lot of the venues in town are not as willing to give up space for a drag show.”

Allinger added, “Or those other venues already have other events planned. We have been blessed to have Dallas Eagle. They have been very flexible in working with us.”

Carter, who works as a regional sales manager and trainer for a specialty battery company based in California, is married to Empress XLI Anna Conda Carter. His gay brother and his lesbian daughter and her partner are also members of the Court.

Allinger, a regional sales and marketing director for a national health care company, was a member of the Imperial Court of Nebraska, serving as emperor of that court before moving to Texas for the man she has been married to for 11 years.

While Carter and Allinger have chosen to be a team as emperor and empress, “we have taken it even further,” Carter said, explaining that the Court in itself is a kind of extended family. The Court has a Care Team designed to help members that need help, and not just financial help, the monarchs said.

“We are a family that has joined together to protect and support each other,” Allinger said. “For me, that’s been the most fulfilling part [of my time as empress], that we have really built connections with people that will last and will endure.”

If you want to become a member of the United Court of the Lone Star Empire and join that family, the two urged, “just reach out to someone who is already a member, either in person or through email on our website,” DallasCourt.org.

While the actual Coronation of the United Court of the Lone Star Empire’s new emperor and empress takes place on Oct. 26, the festivities begin tonight with the In-Town Show, the one show each year in which performers keep the tips they bring in to help cover their expenses during the year. Here is a schedule of events leading up to Coronation 45:

For tickets to events and more details see DallasCourt.org.