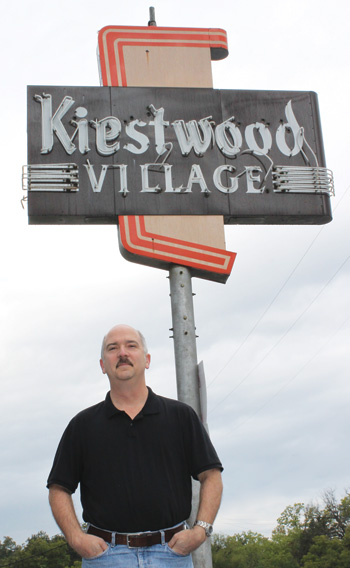 DRAWN OUT | Raymond Crawford, president of the Kiestwood Historical Homeowners Association, refers to the area southwest of Kiest Boulevard and Hampton Road as a “gayborhood.” Under the redistricting plan, Kiestwood would be placed in the district represented by anti-gay Councilwoman Vonciel Jones Hill. (John Wright/Dallas Voice)

Much has been made of the fact that a redistricting plan approved by the Dallas City Council last week could disenfranchise Hispanic voters.

But the redistricting plan, should it be signed off on by the U.S. Department of Justice, could also hurt the LGBT community.

Newly elected District 3 Councilman Scott Griggs said the map approved by the council would effectively cost the LGBT community an ally at the horseshoe because he’s been drawn into District 1, currently represented by Delia Jasso.

Meanwhile, under the plan, heavily LGBT areas of Oak Cliff currently represented by Griggs and Jasso have been drawn into districts that are home to Dwaine Caraway and Vonciel Hill.

“Delia and I have been pretty involved and very supportive of the GLBT community over the years,” said Griggs, who hasn’t indicated whether he’d run against Jasso in 2013 if the plan holds up. “You have two other council members who haven’t shown as much support.

“You are losing an ally,” Griggs added. “Is Dwaine [Caraway] or her [Hill] going to be as open or responsive as Delia and I have been?”

Jasso, who formed a citizens LGBT task force after taking office in 2009, couldn’t be reached for comment this week. But Jasso reportedly supports other Hispanic leaders who plan a lawsuit against the city if the redistricting plan is approved by the justice department.

Led by attorney Domingo Garcia, they allege the plan violates the Voting Rights Act. The plan guarantees that only two to four of the council’s 14 districts would be represented by Hispanics, who account for 42 percent of the city’s population.

Jasso believes she might have difficulty retaining her seat, because the new District 1 would include heavily Anglo areas with high voter turnout, including Kessler Park, Stevens Park and Winnetka Heights.

“I think that map is horrendous, and I’m really hoping that a lawsuit is brought forward based on that map, and I’d be happy to testify against it if and when it happens,” Loza said.

Loza lamented that the redistricting commission spent 95 hours working on the map it submitted to the council. But the council redrew the commission’s map based on what Loza called “a backroom deal,” and the panel’s work went “down the toilet.”

Loza said although his primary concern is Hispanic representation, he’s also bothered by the fact that two of the LGBT community’s strongest allies were placed in the same district.

“I don’t think it’s as unfortunate to the LGBT community as it is to the Latino community, but I think it does both communities a disservice,” he said.

Under the plan, Oak Cliff south of Illinois Avenue is split along Hampton Avenue, with the east side being placed in what would be Caraway’s district and the west side in Hill’s.

Hill is the lone current council member who’s refused to appear at gay Pride or sign a letter congratulating organizers of the event.

Asked in 2009 why she won’t ride in the parade, Hill voiced religious objections to homosexuality, saying she believes that “there are acts God does not bless.”

Raymond Crawford, who is gay and serves as president of the Kiestwood Historical Homeowners Association, refers to the area southwest of Hampton Road and Kiest Boulevard as a “gayborhood.” Crawford counts 15 gay households on his street — Southwood Drive — alone.

Under the redistricting plan, the 400-plus-home Kiestwood neighborhood, currently represented by Griggs, would be placed in Hill’s district.

“The day she [Hill] comes to call to do some door-knocking or to get some votes, whether I’m the president or not, it’s going to be an interesting conversation with Councilmember Hill,” Crawford said this week. “She’ll be in trouble in 2013 based on her previous statements.”

VIEW A MAP OF THE REDISTRICTING PLAN: CLICK HERE