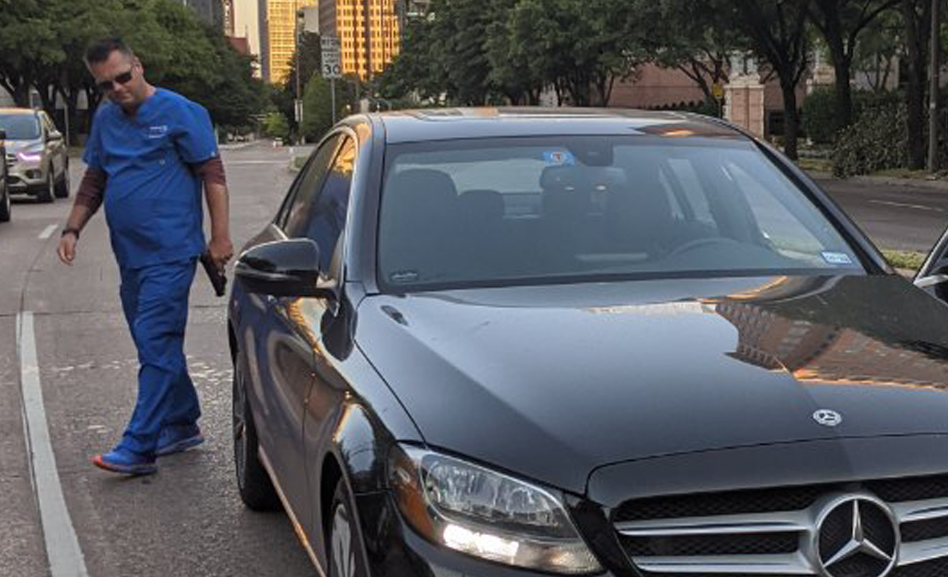 A man who had bumped a protester with his car got out of the car carrying a gun to look for possible damage after another protester bumped the car door.  He then sped off through the crowd. (Photo by Steven Monacelli)

Eight minutes and 46 seconds. Approximately one-third of the average television show. It doesn’t seem like much time at all — less than the common beginners meditation recommendation of 10 minutes.

It’s not much time at all.

And yet, when faced with the demand to be patient and listen for eight minutes and 46 seconds — the amount of time that a police officer kept his knee on George Floyd’s neck — many Dallasites seem entirely incapable of doing so. Most protesters can’t stay on one knee that long and have to switch at least once midway through. It’s an uncomfortable position to hold on the hard concrete street.

It is an acknowledgement of pain.

What, then, explains the aggressive, reckless and borderline violent actions of many men in Dallas, who — from the air conditioned comfort of their cars — decided that they couldn’t wait an uncomfortable eight minutes and 46 seconds, and instead tried to plow through the protesters.

With only one exception, my team and I have reported every day and every night on the protests, sparked by Floyd’s death. Since the events on the Margaret Hunt Hill Bridge on June 1, the demonstrations in Dallas have been overwhelmingly peaceful. Yet, as the police have taken a step back, reducing their presence, aggressive drivers have filled the void.

I was among the crowd on June 8, when I a negligent driver nearly backed over me after threatening to pull out his gun on the crowd. And I was there on June 16 when a man bumped into a protester then got out his car carrying his gun after a protester made contact with his car door, before speeding recklessly through the intersection.

From my perspective as a journalist, the protesters have done as much as possible to act safely when blocking traffic and to de-escalate situations when things become tense. But these incidents have not been without controversy or issue, as conflicts have emerged within the protest group regarding safety protocols.

But it is without a doubt that over the last 10 days, aggressive drivers have been the ones putting people in danger.

This is a disturbing pattern — one which must be adequately addressed by the media, law enforcement, and protest organizers — if things are to continue safely. If protesters continue to take to the streets — something they seem to have every intention of doing — what more can be done to limit and de-escalate these dangerous interactions? How many almost-injuries have to happen before a serious injury or death occurs?

Certainly, steps can be taken. But ultimately this pattern cuts through all of us as individuals.

We must ask ourselves: If I can’t wait for eight minutes and 46 seconds, if I find myself becoming impatient to the point of violence because of these protests, why?

If you can’t wait because you need to get to the hospital, OK. Let them know. Protesters have consistently allowed individual cars and emergency vehicles, en route to medical centers, to pass.

But if it’s because you just don’t want to listen, then that may be a problem for you.

Eventually, you, too, may be stopped at an intersection by a protest. What would you do? Would you raise a fist? Step out of the car to join? Shake your head in disagreement?

Or would you put your car in drive and hit the gas, regardless of who is in front of you?

Ask yourself: Can you wait eight minutes and 46 seconds? And if you can wait, can you listen?