Pride is flying high in the Texas Panhandle

OUTstanding Amarillo getting set for its annual gay Pride month party; more than 1,000 expected to attend 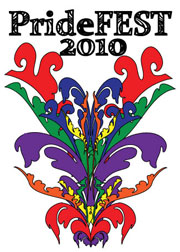 AMARILLO — Twenty-six years ago this month in Amarillo, a “heartsick” parent wrote to Ann Landers begging for advice about their daughter, who had just come out as a lesbian.

The parent worried, “Did we raise her wrong?” and “Is it our fault that she is like this?”

They found it impossible to welcome their daughter’s gay lover into the family “as if it was normal.”

Landers replied that no one knows for sure why people are gay, whether nature or nurture, but “unless you accept your daughter … you will lose her forever.”

It is 2010 now, and we can only hope that whole family is still together — and perhaps celebrating at PRIDEfest in the Texas Panhandle.

Cyndy Walton, president of OUTstanding Amarillo, said anywhere from 1,000 to 1,500 people are expected to attend.

“The event is about celebrating our pride as LGBT folks,” Walton said, “in the middle of town.”

OUTstanding is the primary nonprofit resource organization for the LGBT community in the Texas Panhandle area and is celebrating its 12th anniversary this year.

Instead of having a parade, the organization hosts a family-oriented picnic complete with volleyball tournament, music, vendors and food booths. The Amarillo Metropolitan Community Church will be serving ice cream and setting up a dunking booth.

Walton said, “This is a time of year that we see folks we don’t see at any other time.”

The Pride event, she says, is affirming for the community, and it allows the community as a whole to get to know the city’s LGBT residents, Walton said.

The festival has taken place for 15 to 20 years, according to board members.

And during that time, Walton said, “We have come a long ways, being out, being present.”

Amanda Blackshear of Dallas was surprised that Amarillo had progressed so far as to have a festival. She lived in the Panhandle from 1975 to 1980 and moved to Dallas so she could be openly gay.

Blackshear reminisced about the gay bars having no signs out front and about having to enter the barsw through the back alley.
“Many Amarillo folks are still not out,” she said of friends she talked to during a recent visit to the Panhandle. “But it is good to know that the younger gays aren’t so closeted.”

Sandra Dunn, a board member for OUTstanding, said she is expecting Mayor Debra McCart to attend the festival. The mayor’s office was not available for comment.

Dunn said she expects the event to be peaceful and that it gives her a chance to get outside and be with others like herself.
Several off-duty police officers will be at the event to ensure everyone’s safety, Dunn said, noting thatRepent Amarillo, a spiritual warfare group, picketed the PRIDEfest in 2009.

“[While] there are a few people in town who like to cause trouble, for the most part, the community is very accepting, and I’m not aware of a lot of discrimination,” she said.

Dunn said the world is not a scary closet and LGBT people have to learn to believe and be true to themselves.
“The hardest thing is to get over that fear,” she said. “If you get over that, it’s not so bad.”

For more information about PRIDEfest, go online to OUTstandingAmarillo.org.

Renee Baker is a freelance writer and can be found online at GenderPower.com.

This article appeared in the Dallas Voice print edition June 18, 2010.