Pride from the top down 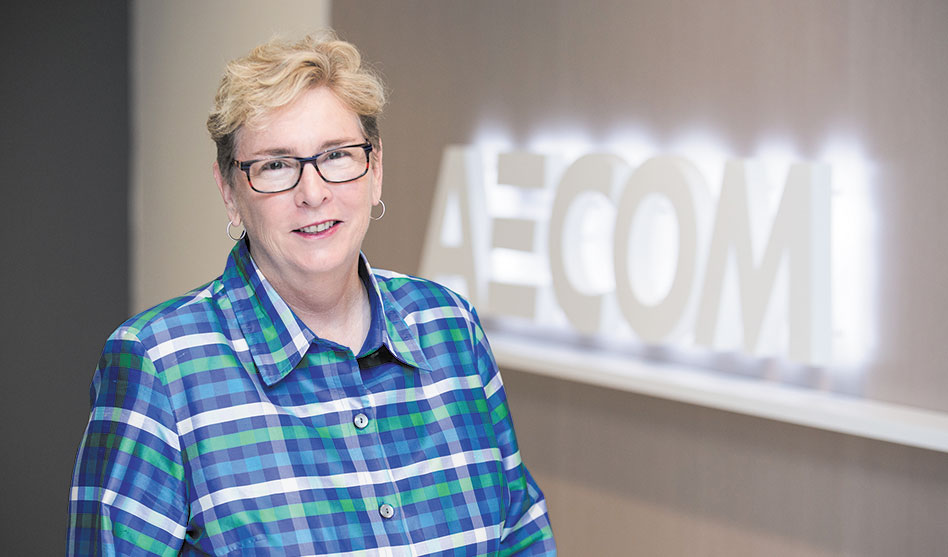 AECOM is proud to be recognized as a top employer for LGBTQ inclusion, and executive Wendy Lopez helped make it happen

AECOM, an infrastructure consulting firm that relocated its headquarters to Dallas last year, this year was named one of the best places to work for LGBTQ equality by the Human Rights Campaign. And it was through the leadership of Wendy Lopez, the company’s senior vice president, Texas executive, that helped the company reach that goal.

Lopez, formerly the CEO of Wendy Lopez and Associates and of LopezGarcia Group, founded her own company and grew it from a one-person minority/women-owned engineering consulting firm to a multi-disciplinary engineering and environmental services company in less than 20 years. Under her leadership, the company worked on a number of high-profile projects, including AT&T Performing Arts Center, the Dallas Cowboys stadium, George Bush Library and Perot Museum of Nature and Science.
Lopez sold her company in 2008 to URS Corp., and the URS Corp. was acquired by AECOM.

Lopez is executive sponsor for AECOM’s Pride Employee Resource Group, helping make sure the global company leads by example and draws local talent to build diverse teams and create inclusive environments. She has been recognized through the years with several awards, including the Regional Hispanic Contractors Luna Lifetime Achievement Award, the D CEO Dallas 500 Leaders award and ENR’s Legacy Award.

This week, Lopez took a few minutes off from helping prepare AECOM’s float for the 2022 Alan Ross Texas Freedom Parade to answer a few questions for Dallas Voice.

Dallas Voice: You spent 20 years as CEO of your own company, and now you are senior vice president and Texas executive for AECOM. I know it’s been a few years since you made the transition, but talk a little bit about going from being head of your own company to working for someone else. What were some of the things you were hesitant about in making that change, and what have been the biggest advantages for you? (Also, what does “Texas executive” mean?) Wendy Lopez: I remember waking up on the day of the sale of LopezGarcia Group and feeling a little nostalgic, as I knew this would be the last day I would walk into the office as CEO. On the positive side, the risks associated with ownership are now off the table. Financially, selling the company was the right thing to do for all of my business partners. We all walked away with great return on our investments.

The biggest changes in going from owner/entrepreneur in a privately-held firm to an officer in a publicly-traded company were the adjusting to my new level of authority in the new position and speed in which decisions could be made. In a small company like LopezGarcia Group, if you could get the right two or three people in a room, almost any major decision could be made. With a larger company, not so much. Another thing that changed, was my control over my schedule. As CEO, people scheduled around my availability, now I was constantly adjusting for others’ availability.

As Texas executive, I am the face and voice of our business in Texas. I am responsible for setting the strategy for growth across all business lines in Texas.

Was there ever any issue, in transitioning from owning your own company to being an executive in a larger company, with you being openly LGBTQ? Did you ever have any concerns that you might be expected to “tone it down” or even go back into the closet? To appreciate my answer to this question, you must first understand that I sold my business to URS in 2008, and then AECOM bought URS in 2014. In the beginning with URS, we just didn’t talk much about being LGBTQ. I got the feeling no one wanted to know about it. But to be fair, no one talked much about their personal lives. So it was kind of “don’t ask, don’t tell”-ish.

Then when we were purchased by AECOM, everyone was really encouraged to adjust to AECOM’s culture which was much more open. AECOM’s philosophy is that we are all more creative and productive when we are allowed to be ourselves. I know more about my colleagues’ personal lives now than I ever did at URS.

The culture at AECOM is very similar to the culture of LopezGarcia Group; we’re like a family that looks out for one another. 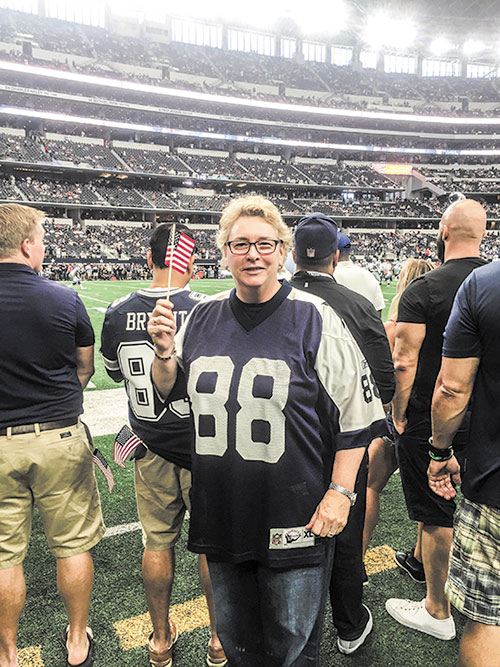 What was the company culture like in terms of being open and accepting when you joined AECOM, and in what ways you have helped the company become more diverse and have a more open and accepting corporate culture? AECOM was open to the LGBTQ community from the start, encouraging both LGBTQ staff and allies to join forces. I recall that during the first June that I was with the company, our Great Place to Work committee was busy scheduling Ted Talks, guest speakers, happy hours, etc., in celebration of Pride month.

We have now further evolved as a company to include the establishment of Employee Resource Groups. The Pride ERG, along with the BeBold (Black) and Women’s Leadership Alliance were the first ERGs rolled out a couple of years ago. I was asked to serve as the executive sponsor of AECOM’s Pride ERG, and I am completing my second year in that role.

AECOM has since added the Mosaic (Asian Pacific Islander), LatinX, Native/Indigenous, Veterans and Early Careers ERGs. It is important to note that the ERGs not only draw members of each community, but allies of each group are also encouraged to join.

As executive sponsor of AECOM’s Pride Employee Resource Group, you work to “ensure the global firm is leading by example and drawing local talent to build diverse teams and create inclusive environments.” How do you accomplish that goal, and why do you feel like it is important? Each ERG has an executive sponsor, president, vice president, treasurer and decretary structure. This year we also added committees to work on marketing, communication, events, fun, etc. My role as executive sponsor of the Pride ERG is to be a strategist, change agent, innovator, broker and agent for the ERG.

We believe that we can grow and strengthen our business by reaching all members of society. For example, we recruit staff using the oSTEM organization (Out in STEM), and we have discussed hosting happy hours with our clients’ corresponding ERGs with the goal of strengthening our relationships with them. The ERG leadership has no shortage of great ideas, and I find myself mostly in the “broker” role, making connections to people and organizations inside and outside of AECOM. 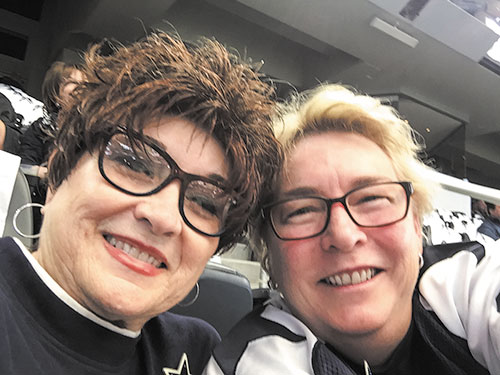 AECOM has maintained a perfect score of 100 on the Human Rights Campaign Foundation’s 2022 Corporate Equality Index and has been designated as a Best Place to Work for LGBTQ+ Equality in the United States. How important is that to you, individually, and to AECOM as a company to maintain that score and that Best Place designation? This recognition of AECOM as a Best Place to Work by the Human Rights Campaign is hugely important to me, our ERG and AECOM leadership. It is like the “Good Housekeeping” seal of approval. On a personal note, my spouse, Connie, and I have been major donors to HRC for many years, so it is personally satisfying to see AECOM recognized in this way.

One of the activities the Pride ERG is investigating ways to improve our health insurance coverage to include gay couple insemination, without gay couples first having to try to conceive “naturally.”

One last question: AECOM relocated its headquarters to Dallas last year. But in the last couple of years, the Texas Legislature and some of our elected officials have kind of lead the way in attacks not just on LGBTQ equality — especially transgender rights — but on women as well. Have any of those political decisions perhaps made the company officials question the decision to relocate here? What if any role does AECOM see for itself when it comes to politics and some politicians’ efforts to attack our community? AECOM promotes equity, diversity and inclusion and encourages our employees to be who they are and have the same rights as all citizens. Moving our HQ from Los Angeles to Dallas had more to do with the great business climate in Texas, and the availability of corporate staff in Texas. AECOM’s leadership believes when we are free to be ourselves, we thrive.

Is there anything I haven’t asked about that you wanted to mention? AECOM is excited to be marching in this year’s Alan Ross Texas Freedom Parade, participating in the Dallas Pride Festival and raising funds for the Silver Pride Project, which supports the senior LGBTQ community. Look for us on the fancy float!