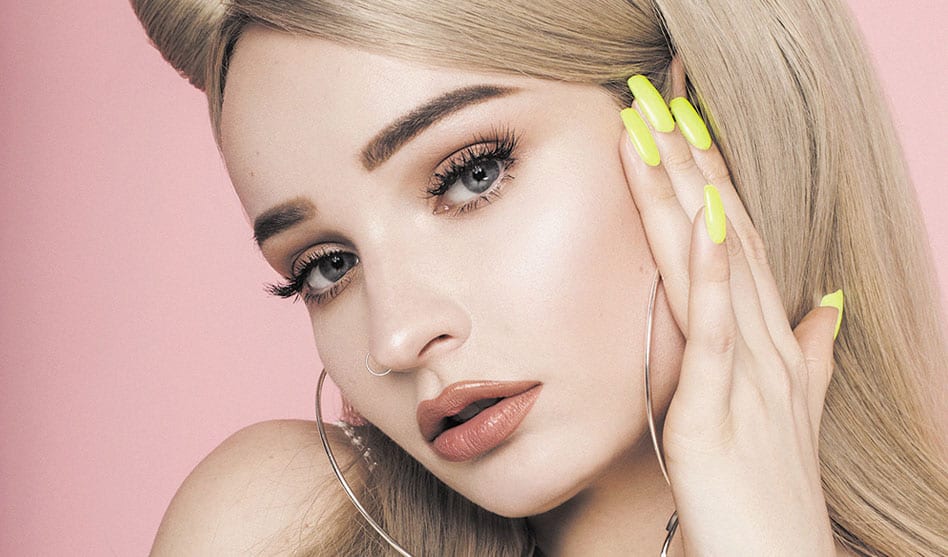 Breakout star Kim Petras blazes her own path to success

Kim Petras never knows when her musical muse might strike. She could be traveling, shopping, attending a party or simply hanging out with her besties when inspiration flashes unexpectedly. To capture these oft-fleeting thoughts, the quirky diva with a side bun (or side ponytail, depending on her mood) has learned to keep her smartphone within reach at all times.

“It’s always really embarrassing to walk around in public and mumble into your phone and sing a weird melody,” Petras says, describing how she regularly uses a voice memo app to record her ideas. “Then I go back to it in my studio when I’m home. It’s definitely worth the weirdness.”

Petras, 26, has been obsessed with pop music and songwriting since her early teens, growing up in her native Germany. She researched and collected information about pop lyricists much in the way that her peers might have followed the careers of their sports heroes. And when her classmates were hanging out together at parties, Petras was at home writing songs and making beats.

“I was just always really dedicated to it, but it never really felt like a sacrifice,” Petras says of songwriting. “This was always what I wanted to do most — to be on stage or write a song. It’s been my dream since I was a kid. I never really felt like I was missing out or making a sacrifice. I’ve just kind of worked really, really hard and didn’t have much free time for a long time. But I’m so cool with that, and I love it.”

Petras’ unyielding devotion to high-energy music is now paying off. On Sept. 21, the pop princess joins gay heartthrob Troye Sivan for his Bloom Tour, which kicks off at Toyota Music Factory in Irving. Petras has spent the last few weeks rehearsing and preparing herself both mentally and physically — “Most importantly, learning a lot about vocal health and how to take care of my [vocal cords] because I have to sing really high-pitched songs every single night,” she says — to meet the tour’s demanding schedule.

While the upcoming tour will be her first, the charming chanteuse is certainly no stranger to public performances. After years of playing at (among other venues) gay clubs, Petras has garnered a strong LGBT fan base. Last June, she performed for a sold-out West Hollywood crowd as a featured artist during L.A. Pride. Petras says her gay fans were “definitely the first to jump on this train and love these songs,” and she is grateful for the support from a community to which she, as a transgender woman, also belongs. She aspires to use her newfound spotlight as a platform for advocacy.

Petras prefers, however, to be known more for her vibrant music than for her gender identity. Despite being among the youngest candidates worldwide to transition fully (she was 16 at the time), Petras considers her bold decision to move from Germany to L.A. in pursuit of her musical dreams the life accomplishment of which she is proudest. The blind leap was a risk she simply had to take.

“I was 19,” Petras says recalling her transatlantic move. “I was like, if I don’t go now, I’ll never find out if I could have made it. Producers in Germany didn’t really want to make bubblegum pop music. I’m really proud I did it all by myself.”

Petras is grateful for the success she has enjoyed in a relatively short time, and she has no intentions of throttling her musical efforts. She focuses daily on growing professionally and improving her craft. And while she has issued a number of popular singles like “Hillside Boys” (one of her favorites to perform) and “I Don’t Want It At All” (a track which landed on Billboard’s dance chart), Petras says she “can’t wait to put out an album.” For motivation and inspiration, she considers words of wisdom her mother gave her.

“My mom always told me that you only have one life and why not be happy in this one life,” Petras says. “My parents just kind of taught me to go for it and to be happy and to be accepting and to be nice. Also, being gracious and nice and humble is always great advice to get… and to give to people.”

Pop music is not Petras’ only preoccupation. A perhaps little-known fun fact is that she also has a fascination with the praying mantis. She features the slender green insect in at least two of her music videos, including that for “Heart to Break” in which Petras portrays a fragile princess locked away in a purple crystal tower.

“I just like praying mantises,” Petras says. “And the thing about them is that they always, like, move upwards. So I guess there is some positivity there. And in [the music video] “Heart to Break,” [I thought] every princess needs a sidekick, so I was just like, ‘Why not have it be a mantis?’”

Why not, indeed. █