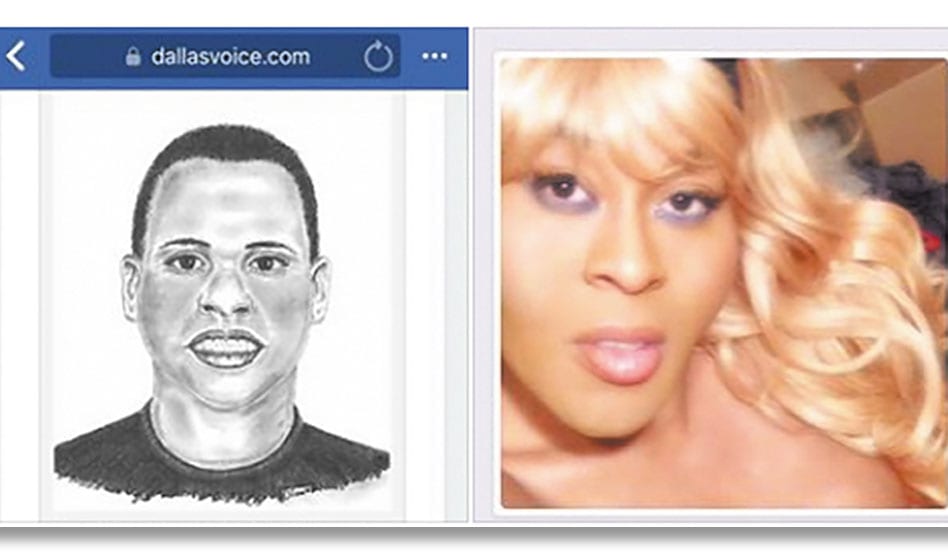 A police artist’s sketch issued after a trans woman’s body was found in White Rock Creek, left.
The woman has since been identified as Nicole Hall, right. (Photo courtesy Shannon Walker)

The transgender woman whose body was found May 12 in White Rock Creek was identified this week by police as 39-year-old Nicole Hall. Friends are planning a vigil for 7 p.m. Saturday, May 26, in the park area in the 6900 block of Merriman Parkway, near where Hall’s body was found.

Organizers said Dallas police officers would be on hand to help ensure the safety of those gathering.

Friends have also established a GoFundMe page — gofundme.com/nicoles-final-arrangements — to help the family pay for final arrangements.

Police had not, as of Thursday afternoon, May 24, released any information regarding Hall’s cause of death.

But Shannon Walker, a local trans activist, said she had been told by someone in the Dallas County Medical Examiner’s office that Hall’s death had been ruled a suicide by hanging. The question remains, however, how Hall’s body would have then ended up in the creek.

Walker had gone out to the area around Merriman Parkway after Hall’s body was found, looking for anyone who might have seen something or might have any information that would help police identify the dead woman.

Walker said she had also spoken to the Dallas police detective handling the case. But when he stopped answering her messages, she reached out to a person in the medical examiner’s office she had talked to before. Although the ME’s office at first had no information for her, she said the person there called her back later “and gave me two names of people who had been reported missing and asked if I knew anything about either of them.”

One of the names rang no bells for Walker, but “then she said the other name, Eric Tyrone Hall, and I thought, wait a minute! I know that person!

Walker said she and Hall had grown up together and “went through our transitions together.”

When she told the ME’s office employee she knew Hall well, “she asked me to tell everything about her, from the top of her head to the bottom of her feet. And I did. She asked if Nicole had any tattoos; I said no. She only had one piercing, in her belly button. And she had the biggest hips and the biggest butt in Dallas.

“She told me yes, I think this is her,” Walker said, but added that the ME’s office couldn’t confirm the identification without further proof. “She said they were having trouble getting dental records, but I told her that Nikki had gone to Parkland [in 2013] when she had some problems with one of her cheek implants, and they did a CAT scan or an MRI of her head, and maybe they could get that to confirm.”

Walker said the ME’s office then requested those images and records, and used them to confirm Hall’s identity.

Walker said that she had talked to a number of people who had been upset when police first released an artist’s sketch, before Hall had been identified. Although police said the body was that of a transgender woman, the sketch showed a person with short hair and who was more masculine in appearance.

“A lot of people called me with concerns about the sketch, saying how did the police expect somebody to identify a trans woman from a sketch that they felt like was extremely masculine,” Walker said. “But people have to remember, when they found her Nicole did not have on any hair, no wig or weave. And the body was so severely decomposed, [the ME’s Office employee] told me they really couldn’t even determine her skin tone.

“But when I look at that sketch next to a photo of Nikki, I can certainly see the resemblance there. I think they did the very best they could with what they had,” Walker said.

She said many people were also upset that when police announced they had identified the body, they dead-named Hall. But again, Walker said she believes that was more a matter of necessity rather than disrespect.

“Nikki never had her name legally changed. So her other name was the only legal name they had to use,” Walker said. “If it hadn’t been for me telling them, they wouldn’t have known the name Nicole at all. But I will be reaching out to them to try and get them to recognize her name as Nicole.”

Overall, Walker said, police have been “extremely respectful” throughout the process, “and I am so happy that we are at this point now. It’s been a long time coming. In the past, it’s been extremely difficult working with police [on transgender issues]. But especially in these last two cases [Hall and trans murder victim Carla Flores-Pavon], they’ve done a great job.”

Carla Flores-Pavon, 26, was found strangled to death in her apartment on LBJ Freeway in North Dallas on May 9, making her the 9th trans woman murdered in the U.S. this year. Jimmy Eugene Johnson III was arrested May 17 during a traffic stop in Walker County after being found to have some of Flores-Pavon’s belongings in his possession.

Police have not classified Flores-Pavon’s death as a hate crime; they said they believe that Johnson, who met her online, killed Flores-Pavon during a robbery, not because she was transgender.