Police: Help us find this suspect 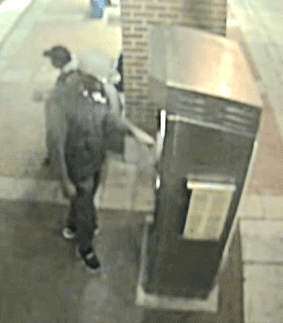 Dallas police today (Monday, Nov. 9), posted the above video of a man using a stolen debit card at a West End DART station ATM, asking for the public’s help in identifying and locating the suspect.
The debit card was stolen during the first of five armed robberies that occurred between Thursday, Oct. 29 and Sunday night, Nov. 1, on the Katy Trail. A man told police he was jogging on the Katy Trail about 9:40 p.m. on Oct. 29 when he was robbed at gunpoint by two men. Two suspects fitting the same descriptions were involved in the other four robberies.
Anyone with information is asked to call Dallas police at 214-671-3584 or Crimestoppers at 214-373-TIPS (8477).