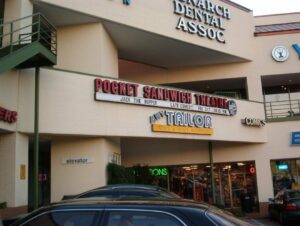 Pocket Sandwich Theatre fans will have to take that melodrama popcorn-throwing elsewhere. The theater announced in a press release Thursday that it will be moving and is currently looking for a new home. The shopping center that had been its home on Mockingbird Lane for more than 30 years was sold.

“When we met with the new owners and they informed us that we do not fit their vision for the future of the shopping center and informed us we needed to vacate our theatrical home of more than 30 years,” the theater stated in the release.

Last year was the theater’s 40th anniversary that would have featured a curated season of shows celebrating aspects of the theater’s history, but then COVID-19. For the holiday season, the company will present Ebenezer Scrooge as its final production in its current location. This will mark the 39th annual production of the show.

“We are currently looking for other locations that would be suitable to convert into a dinner theater, conveniently located for our customers, and financially sustainable. We will be announcing a new location as soon as a new place is identified and arrangements are formalized,” PST mentioned.

The theater was known for its more eclectic, irreverent offerings that include plays, comedy, music and even drag. Currently at PST is the popcorn melodrama “Drac in the Saddle Again” through Aug. 28. On Aug. 27 and 28, PST will feature the late-night show Last Call with Ginger Layne: The Late Night Drag Talk Show You Didn’t Know You Needed at 11 p.m.

The theater’s history began when Joe Dickinson and Rodney Dobbs met at Dallas Repertory Theatre. As The Emporium Players, the two produced shows at the Greenville Ave. Pocket Sandwich Shop. The two ultimately purchased the location and in 1990, moved to its current location on Mockingbird renaming the company Pocket Sandwich Theatre.

From the press release:

“When theater artists work on a show for ten to twelve weeks—encouraging, inspiring, and challenging one another on stage—they create something that you cannot just walk away from at the end of a run. They create a family. As evidenced by the headshots adorning the walls of the Pocket, it’s a massive family. We cannot express enough gratitude to the members of this massive family for all they have done to help us to the pandemic and the commitment they express to moving forward with the Pocket. New Pocket partner Kim Winnubst noted “I have never felt more welcomed at a theater in Dallas than I have at the Pocket, either as a performer or an audience member. It is our goal to ensure everyone who steps through our doors feels that way. The Pocket has always been the most fun you can have in a Dallas theater, but it also has the most heart you will find at a Dallas theater.” Our loyal patrons and generations of attendees would agree.”

Theater is meant to be transient; we create something that is meant to last for a moment in time. We do not know where will be located for the next chapter of the Pocket Sandwich Theatre story. However, we remain confident that the story is not over. We want to continue to grow our outreach, audiences, and impact in the community.”