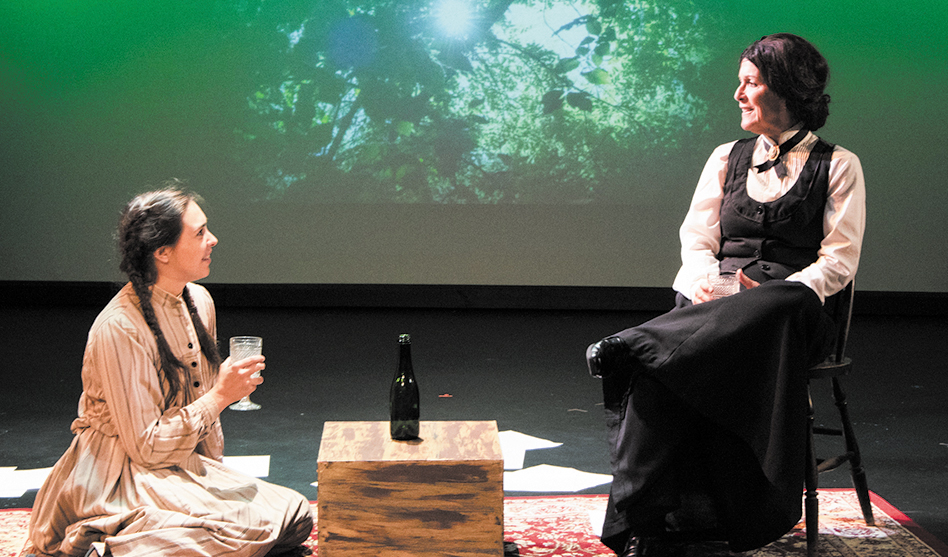 Isabelle Russell-Ides’ literary fantasy about Louisa May Alcott (Victoria Wright) and her creation Jo March (Bethany Burnside)
is a standout at this year’s FIT.

Reviewing the second weekend of the alt-play festival

The biggest mistake of my life,” opines the novelist Louisa May Alcott from some non-specific netherworld, “was being born a girl.” Like her contemporary Emily Dickinson (they both died at age 55, within two years of each other), Alcott was a woman trapped by the circumstances of her era. Raised by Transcendentalists in the hard-scrabble of New England, Louisa’s creativity was fostered (her parents were feminists before that term was probably even coined), but she was still expected to conform to most social norms of dress and propriety. And she found it stultifying.

In Jo & Louisa, now playing as part of the Festival of Independent Theatres, playwright Isabella Russell-Ides has conjured an interesting mechanism for exploring the author’s duality: She has conceived of the story as an impossible dialogue between the omniscient ghost of Alcott (played by Victoria Wright), fully aware of the world and her place in history and her greatest literary creation, Jo March (Bethany Burnside), a fictional character who nonetheless seems miffed at the life of the mind she has been sentenced to. The women bicker, even as they understand one another: Jo was Alcott’s alter-ego, yet one she saddled with the legacy of conventionalism. (Alcott did what she could, giving her heroine a masculine-sounding name.) Jo, in Russell-Ides’ interpretation, is not so far removed from another 19th century fictional character penned by a woman: Frankenstein’s creature, an abomination who hates her creator for distorting what she deserves to be.

This two-hander bounces along with thoughtful discussions of androgyny, sexual labels and gender identity, suffused with a literary intelligence that never condescends. Russell-Ides incorporates references to Virginia Woolf’s Orlando and Elena Ferrante as well as Netflix and Elizabethan-style theater, and the director, Susan Sargeant — always one of North Texas’ most inventive and savvy interpreters of erudite playwriting — modulates the emotional journey smartly. Both actresses are terrific, although Wright’s transformation from regretful, stiff spinster into a liberated, trouser-wearing lesbian comes off as especially poignant. Jo & Louisa is funny and wise and thought-provoking, and forces you to look anew at Little Women, and its author, through rainbow-colored glasses.

Unlike Alcott, Lee (Gazelle Garcia), the gender-fluid young person (who uses the pronoun “they”) does not seem to have any misgiving about being queer… just about having a bitchy girlfriend. On the last day before Lee’s 86-year-old grandmother Dorothy (Leena Conquest) is scheduled to move into a nursing home, Lee takes her to the local zoo where Dorothy once worked. As they sit on the rim of the rhino enclosure, Dorothy recounts with cynicism her familiarity with the taxonomy of marsupials, her wisdom about relationships and her anger at being treated as a frail ol’ lady when she has it together better than most of the younger folks.

Dirty Dirty Night Squirrel starts off with a quirky sense of whimsy, and it remains quirky throughout (at one point, there is an interlude with tutu-wearing rhinos… or are they opossums?), but it also never quite coalesces around a central idea: Ageing? Independence? Self-realization? The generation gap? The ending is a puzzle and frankly doesn’t work. But along the way, we get to be delighted by Conquest’s droll performance and surprisingly interesting facts about herbivores. That’s unique.