‘Perform or provide’ — more on Antal, the chaplaincy and more 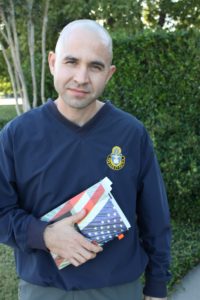 Chaplain Chris Antal (Lieutenant) said that when “don’t ask, don’t tell” was repealed, chaplains were given an out. They could resign their commissions without repercussion, something not offered to any other military personnel.

Antal, who is straight, married and has children, is featured on the cover of this week’s Dallas Voice. Military chaplains are not asked to perform any duty that goes against their religious beliefs so as a Unitarian Universalist minister he had to make clear his position and his denomination’s position — equality.

Although he’s known as the Catch-all Chaplain, he said, “My commander has the big picture in mind.”

But many other chaplains don’t see their jobs the same way. He called the failure of some chaplains to minister to gay and lesbian troops a dereliction of duty.

“One of the conditions of becoming a chaplain is that we agree to minister in a pluralistic environment,” he said. “They knew what they were getting into.”

At a chaplain’s conference after the repeal of “don’t ask, don’t tell,” the senior ranking chaplain said, “We’ll have a conversation about your concerns.”

Antal said that several voiced concerns that they wouldn’t be able to preach the Bible as they understood it.

“In that context, I spoke up and I expressed my concern,” he said. “Who’s going to take care of all those gay and lesbian service members? I can’t do it all.”

He said that a Catholic deacon in the room spoke up and said he had a lesbian daughter.

He said the deacon was honoring his experience above and beyond the dogma of his church. The deacon told the group that in this case he was going to trust he experience and suddenly things were not black and white for the group, Antal said.

He said the lesson showed the importance of dialogue.

“It’s important for gay and lesbian service members to tell their story — not in debate but in dialogue,” he said.

He said the fear was there would be public displays of affection between gay troops.

“But there aren’t any public displays of affection in the military,” he said.

Antal also said that there was a fear that there would be Pride parades on bases and he called that nonsense.

Some facts about the chaplaincy:

The Chaplain Corps, established in 1775 by the Continental Congress, is the oldest military chaplaincy in the world.

With more than 2,900 chaplains currently serving, representing more than 130 different religious organizations, it is the largest military chaplaincy in the world.

Today, more than 800 chaplains and chaplain assistants are currently mobilized or deployed in support of contingency operations throughout the world.

To join, you must obtain an ecclesiastical endorsement from your faith group. This endorsement should certify that you are:

• A clergy person in your denomination or faith group.

• Qualified spiritually, morally, intellectually and emotionally to serve as a Chaplain in the Army.

• Sensitive to religious pluralism and able to provide for the free exercise of religion by all military personnel, their family members and civilians who work for the Army.

• Possess a baccalaureate degree of not less than 120 semester hours.

• Possess a graduate degree in theological or religious studies, plus have earned at least a total of 72 semester hours in graduate work in these fields of study.

And have a minimum of two years of full-time professional experience, validated by the applicant’s endorsing agency.

My interest in the chaplaincy is recent but goes back to my rabbi from my synagogue in New York when I was a child.

Rabbi Abraham J. Klausner was a chaplain in the U.S. Army during and after World War 2. He rarely talked about his experience until he published his book A Letter to My Children: From the Edge of the Holocaust in 2002.

Klausner arrived at Dachau a few days after its liberation and found 30,000 emaciated people still living as virtual prisoners. So he got them food. He got them bedding. He complained about the Army’s management of the liberated camps, sending scathing reports up through the command and to President Harry Truman.

“As matters now stand, we appear to be treating the Jews as the Nazis treated them, except that we do not exterminate them,” he wrote.

But Chaplain Klausner will be remembered best for making lists.

He listed the names of every person still living when Dachau was liberated. He made copies and had them posted at other liberated camps. Many of those living were the only survivors in their families, but he managed to reunite hundreds of people. He worked for about five years in displaced persons camps, assisting Jewish survivors.

After he returned to the United States, he finished a doctorate at Harvard and became rabbi at Temple Emanu-el in Yonkers, N.Y. in 1954, where he served until he retired in 1989. He died in 2007.

Rabbi Klausner bar mitzvahed me. My family remained members of Temple Emanu-el most of the time he served there. I didn’t know about his part in the liberation of Dachau until I was an adult because he didn’t talk about his war experience with children at temple. But his work is an example of just what the Chaplain Corps has achieved.