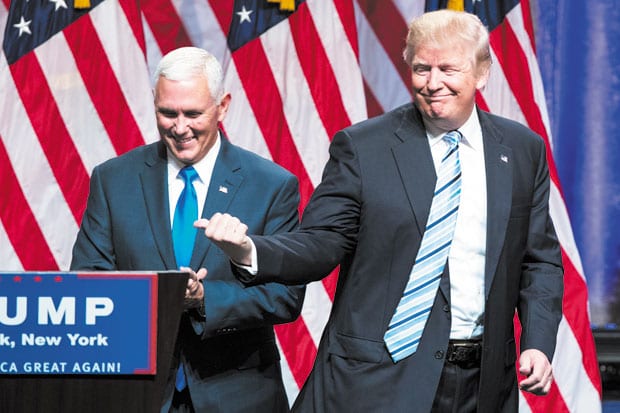 Vice President Mike Pence, left, pictured here with Donald Trump, refused to mention the LGBT community in his World AIDS Day speech, and then lied about the administration’s record on HIV?AIDS.

Tomorrow — Saturday, Dec. 1 — is World AIDS Day, and there are a number of events planned tonight and tomorrow around North Texas to commemorate the day dedicated to focusing attention on the continuing AIDS epidemic and its devastating impact on our World.

The White House held its World AIDS Day event on Thursday, Nov. 29, and for some unknown reason, Vice President Mike Pence was tapped to deliver the event’s keynote address. Pence, by the way, once ran for Congress on a pledge not to support reauthorization of the Ryan White CARE Act until “after completion of an audit to ensure that federal dollars were no longer being given to organizations that celebrate and encourage the types of behaviors that facilitate the spreading of the HIV virus,” according to GLAAD.

Within hours of Pence’s address yesterday, according to Back2Stonewall.com, the Democratic National Committee issued a press release pointing out that for the second year in a row Pence refused to mention the LGBT community and detailing the lies Pence told during his speech and some “truths he forgot to mention.”

THE LIES HE TOLD
• Pence boasted about the success of the Ryan White HIV/AIDS program, despite the fact the Trump administration diverted funds from the program to offset the costs of its immigration family separation policy.
• Pence celebrated the 15th anniversary of PEPFAR, calling it “one of the most successful investments in health care and humanitarian aid in American history,” while Trump’s budget proposal slashed the initiative’s funding.
• Pence claimed Trump brought a “renewed energy and focus” to the battle against HIV/AIDS.

THE TRUTHS HE FORGOT TO MENTION
• Trump fired the remaining members of the Presidential Advisory Council on HIV/AIDS after several members quit because Trump “doesn’t care” about the issue.
• Trump still hasn’t appointed anyone to lead the White House Office of National AIDS Policy.
• Trump announced the “Deploy or Get Out” rule, which could remove HIV-positive military personnel from service.
•Pence, while governor of Indiana, opposed a needle exchange program and exacerbated the local HIV/AIDS crisis.

And just to refresh your memory, while governor of Indiana, Pence pushed for passage of, and then signed into law, a “freedom of religion” bill that would have allowed business owners to refuse service to LGBT people. The law sparked boycotts that cost the state millions of dollars and eventually forced Pence to sign revised legislation specifically prohibiting such discrimination.

GLAAD has a list of other actions by the Trump administration that belie Pence’s claims about the administration’s dedication to combating AIDS/HIV. Check it out.