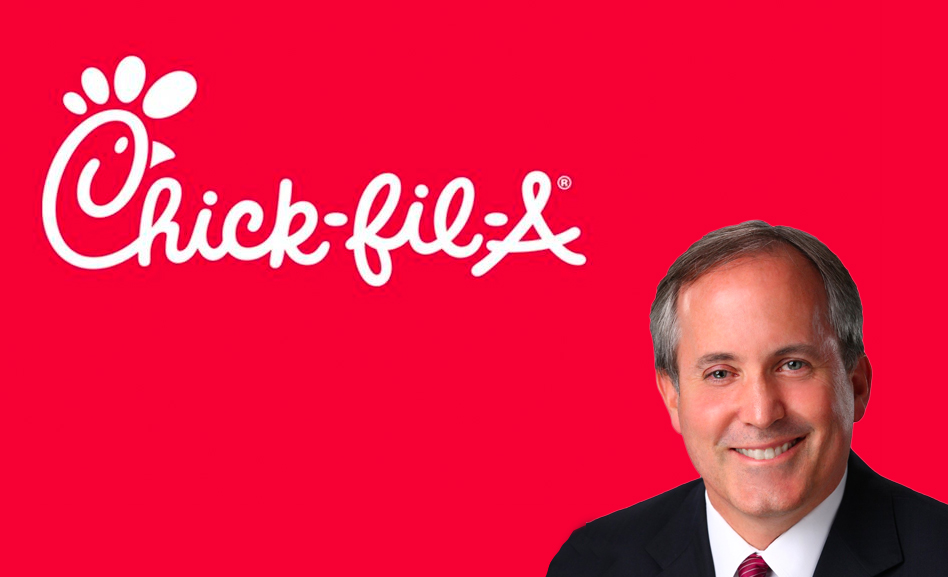 Texas Attorney General Ken Paxton, who has been under criminal indictment on federal securities fraud charges for five years, is declaring a victory for “religious freedom” today (Monday, Sept. 14), after the United States Department of Transportation’s Federal Aviation Administration announced it would offer Chick-fil-A restaurants the chance to lease space in Terminal A of the San Antonio International Airport.

The San Antonio City Council voted in March of last year not to allow the chain to open a restaurant at the airport because of Chick-fil-A’s record of giving large donations to anti-LGBTQ organizations and the company CEO Dan Cathey’s stated opposition to marriage equality. Cathey said on a radio talk show in July 2012, “We’re inviting God’s judgment on our nation when we shake our fist at him and say we know better than you as to what constitutes a marriage. And I pray God’s mercy on our generation that has such a prideful, arrogant attitude that thinks we have the audacity to redefine what marriage is all about.”

Paxton’s announcement comes a week after he said during an interview on Fox News that the FAA’s investigation had concluded that the city’s ban on the restaurant at the airport violated First Amendment rights to freedom of religion and the transportation department’s guidelines. City officials, however, told KSAT Channel 12, it was the city’s decision, not the FAA’s order to offer Chick-fil-A space at the airport, and that neither Paxton nor any other state official had been involved in the agreement.

In a statement released to KSAT, city officials said: “The FAA has not ordered the city of San Antonio to have Chick-Fil-A at its airport. The city itself offered to resolve the FAA investigation informally following Chick-Fil-A’s publicly stated change-of-position on its charitable giving policy. The city maintains that at no point did it discriminate against Chick-Fil-A. Any placement of Chick-Fil-A at the San Antonio Airport is ultimately contingent on Chick-Fil-A’s continued interest and approval by the city council.

“Attorney General Paxton’s inaccurate statements on this issue are not surprising given that neither he nor the state of Texas have been involved in the conversations between the city and the FAA. Unfortunately, and ironically, AG Paxton’s false declaration of victory significantly jeopardizes the potential for a mutually beneficial and amicable resolution.”

City officials said they agreed to offer Chick-fil-A space at the airport because the company pledged in November 2019 to no longer donate to anti-LGBTQ charities. The company’s officials have also pledged, in July 2012, to “leave the policy debate over same-sex marriage to the government and political arena.”

Paxton’s statement released today applauded the city and the FAA for reaching “an informal resolution,” but in the “subject” of the emailed press release says the FAA had “ordered” the city to offer the chicken restaurant chain space at the airport. The press release quoted Paxton as calling the resolution “a win for religious liberty in Texas… . To exclude a respected vendor based on religious beliefs is the opposite of tolerance and is inconsistent with the Constitution, Texas law and Texas values. Our great state deeply values the First Amendment, and I will defend those rights for all who live and work in Texas.”

The fight began last year when, on March 22, 2019, the San Antonio City Council voted to against allowing Chick-fil-A. Council Roberto Treviño said at the time, “With this decision, the city council reaffirmed the work our city has done to become a champion of equality and inclusion. San Antonio is a city full of compassion, and we don’t have room in our public facilities for a business with a legacy of anti-LGBTQ behavior.”

The city council’s decision also prompted the Texas Legislature, which was in session at the time, to introduce and pass Senate Bill 1978, nicknamed the “Save Chick-fil-A Bill,” which prohibits the government from taking “adverse action” against any individuals or businesses based on membership, support or donations to religious groups. Supporters claimed the bill protects religious freedom, but opponents warned that it opens the door to wide-ranging discrimination based on religious beliefs or lack thereof.

Last month, the state’s Fourth Court of Appeals rejected a conservative group’s lawsuit against the city, filed within days of the “Save Chick-fil-A” bill taking effect Sept. 1, 2019. The court ruled that because SB 1978 is not retroactive, it applies only to actions taking place after the measure was signed and therefore does not apply to the San Antonio council’s March 2019 vote.