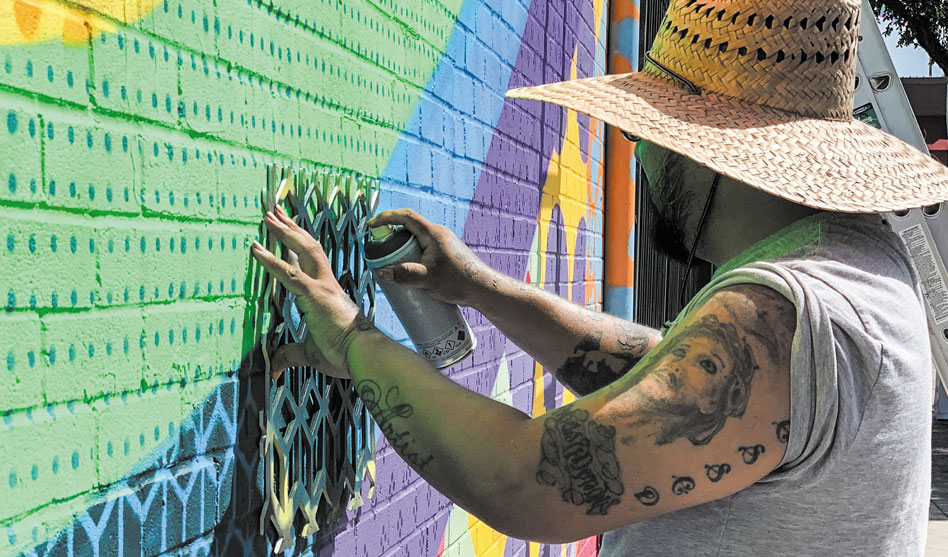 Daniel Yanez puts the finishing touches on the mural he painted on the outside wall of TMC. The image, Yanez said, is meant to honor his LGBTQ daughter and the LGBTQ community as a whole. (Photo above courtesy of Caven Enterprises)

Recent passersby may have noticed the mural quickly taking shape on the street-facing wall of TMC on Cedar Springs at Reagan Street. Or perhaps to others, the bright colors of the rainbow appeared there just all of a sudden in finished form. In just more than a week’s time, artist Daniel Yanez painted this Prideful mural.

The mural was commissioned by Caven Enterprises. But what they didn’t know when they commissioned it was Yanez’s own connection to the community.

“They had found me, and I went down to meet with them, and they told me they had this wall,” Yanez said by phone from his new home in Red Oak. “I don’t think they had an idea, though, of my own story.”

Yanez was told that Caven wanted something reflective of the neighborhood, something that could help bring the community together.

Caven CEO Mike Nguyen explained that Yanez’s work came to them by way of PegasusAblon who recommended a group of local artists. Caven then reviewed those artists’ portfolios.

For Yanez, that was the perfect opportunity. He explained that he had been wanting to do something a bit deeper, something specifically for the local LGBTQ community, because he had a new inspiration: “Not too long ago, my daughter told me she was gay.”

As the parent of a 12 year-old daughter, he admitted, he was immediately afraid. “There were a lot of feelings that came up,” he said.

“There was this fear of her not being accepted or not being safe. I had all these fears as a parent but also as an artist.”

So Yanez had to balance portraying his daughter, showing his own perspective and representing the community to create a single image. “I wanted it to be open to anyone, so I thought long and hard over how I wanted to express the idea,” he said.

The process began months ago when Caven first approached Yanez. Having such a personal connection to this new commission, he said, made him want to learn more about the LGBTQ community as a whole. So the project became a sort of quick Queer 101 education for the artist as he immersed himself in the community and learned about general LGBTQ history.

First, he wanted to know the neighborhood more, so he went and experienced The Strip’s nightlife.

“I felt it was vital to explore the area to reflect it in the best way,” Yanez said. “I met a lot of great people and heard their stories, which gave me a true feeling of the queer perspective. I didn’t want to reflect what wasn’t true to them.”

Yanez wanted to put as much symbolism as he could into the mural. Through his research, he learned about the history of the pink triangle as it was used by the Nazis in the Holocaust and how the community then took it as a symbol of strength and determination.

“There was something beautiful in how the community took that and reclaimed it,” Yanez said.

Building the concept of the painting, he began with an image of a Black man wearing women’s makeup which he found online. The image resonated with him as a starting point.

“To me, I could see [my daughter] Bree, and it was an image that could portray so much,” he explained.

From the mouth emanates a bold and bright rainbow which represents Pride. But also, he wanted it to parallel the idea of his daughter being able to speak freely to who she is.

Yanez wanted the mural to deliver a certain energy, and the bright palette of the queer community was in sync with his own art. With the rainbow and the pinks and other colors, Yanez felt that he could represent both himself and the message in a way that was powerful and exciting and happy.

“Those are feelings I want to put out in the world. My art work involves a lot of color, and that’s who I’ve always been,” he said.

Yanez started as a graffiti artist and continues to use spray paint as his medium. He’s grown into sculpture and installations and has been a professional contemporary artist for almost 20 years now. The 37 year-old has created work for the Dallas Mavericks and Post Fruity Pebbles, and he has painted murals in Deep Ellum, downtown Dallas and Oak Cliff.

He also owns the Cold Soda Gallery where he will have a solo show later in August.

Yanez is no stranger to the idea of supporting community. He created the studio Elevate in Oak Cliff that served as a creative space for artists of color.

“I grew up in the hood, and artists like me never seemed accepted in the art world. So I wanted to create a space where we were welcome and feel like a part of something,” he said.

He’s currently relocating Elevate with eyes on reopening later in 2022.

For now, Yanez’s legacy is caught up in the new Cedar Springs mural with his daughter in mind as the inspiration. In the background, he placed an eye which he isn’t sure people will immediately notice.

“Yeah, that’s myself, looking outward to what I see,” he explained. “I’ve been familiar with the neighborhood, but I’m not part of the community.”

Nguyen thinks otherwise: “I saw a man that truly loved and supported his kid. This is the father — the ally — that we wish we all had when we were younger,” he said. “We wanted artwork that truly expresses the intricacies of our community. What better way than having a father be able to artistically express to his daughter that this is the great future you’re going to have.”

For Yanez, being welcomed into the community is a bonus to the legacy he can share with his daughter as she grows into her authentic self.

“I hope she can go there and let [the mural] be a reminder to her that I do love her, and I want her to be proud of who she is,” he said.

“And I really want to say ‘Thank you’ to the people who spoke with me. Hearing their stories — which weren’t always happily ever after — gave me better understanding. I’m really honored to have been chosen to do this.”