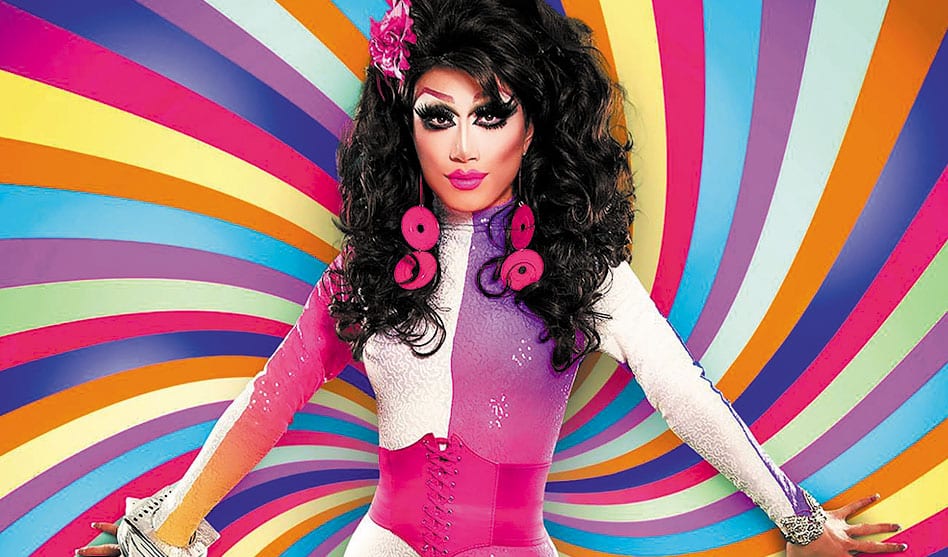 In her youth, Yuhua Hamasaki was often teased and sometimes even bullied for being an outsider. She was a boy who played with Barbie dolls and even sewed dresses for them. She was a Chinese immigrant who felt little connection to the blond-haired and blue-eyed people so frequently depicted on American television. Around her peers, Hamasaki often downplayed her cultural heritage, refusing to speak Chinese or even to eat Chinese food. The self-proclaimed misfit’s outlook on life, however, was permanently changed by an unusual Halloween dare.

“We bought some really cute wigs,” Hamasaki says, remembering when a friend — a “real girl,” she says — challenged her to go out in drag. “I wore one of her outfits. I wore her shoes. I felt so free, so expressive. That’s how I started doing drag. I was 16 at the time. I was a sophomore in high school.”

A transformed Hamasaki quickly learned that drag offered yet another benefit: it disguised the fact that she was underage and facilitated her entry into New York City’s gay bars. At a time when LGBT youth centers were not so common, the club community was one she embraced. Unlike her high school experience, it was a space in which she was wasn’t judged.

“It goes back to you being who you are without caring what people think about you,” Hamasaki says. “You are not acting. You are not putting up a front. When you are yourself, you are going to be happier and more relaxed as a person and more confident as a person, too.”

Drag soon became more than purely an outlet for Hamasaki. She began earning an income as a NYC entertainer, describing her professional style of drag with a colorful string of adjectives: campy, glamorous, funny, witty, sassy, sarcastic and extra. As Hamasaki’s local celebrity increased, so did the steadiness of her paychecks. Never satisfied with settling, though, Hamasaki applied to be and was selected as a competitor on RuPaul’s Drag Race, an opportunity she hoped would be a steppingstone to greater success. 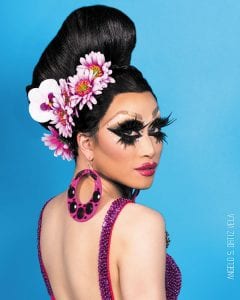 “Usually in your career, you go slowly,” Hamasaki says, recalling the announcement of Season 10’s lineup. “You adjust socially with the changes in your career. [But] with Drag Race, once the cast is revealed, you go from zero to 100 in, like, 30 seconds. There are a lot of changes that happen.”

Hamasaki, who was eliminated in the season’s third episode, says that long hours of filming were the most difficult aspect of being a contestant. While viewers generally see the queens “having a good time on TV,” they do not always witness the “sweat, blood, tears and crying” behind the scenes. The rewards of competing on such a scale, however, were well worth the distress.

I will get to travel everywhere, even Mars, Jupiter, Uranus … everywhere!”

While North Texas may not be extraterrestrial, Hamasaki recently has added it as a travel destination. On Sept. 13, she kicks off a Pride mini-tour with a Qweird appearance at Dallas’ Nines Bar. She travels to Fort Worth’s Urban Cowboy Saloon on Sept. 14 and then returns to Dallas for weekend appearances, including a special show on Sept. 16 for fans under the age of 21 at Alpha Midway Dance Studio — and another that’s still a secret.

Earlier this year, Hamasaki made her inaugural appearance at DragCon. She was overwhelmed by sheer numbers and the diversity of drag fans in attendance.

Young people, though, were an especially surprising if not unexpected demographic. It reminded Hamasaki of her own youth when she admired the courage of those who dared to be different.

“You see kids who are so young come up to you,” Hamasaki says. “They thank you for inspiring them. They are coming from the middle of nowhere. They didn’t know what drag was until they saw the show. When they see someone they can relate to on TV, they get nervous. Believe it or not, we are kind of like their role models … as awful as that sounds.”

As an adult, Hamasaki is far more comfortable and confident living in her skin. She has learned to embrace her cultural heritage. In fact, Hamasaki now often makes a point of appearing in Asian-inspired drag, complete with ornate headdresses.

“Whenever I do drag, I try to incorporate my Chinese look,” Hamasaki says. “Anything to show that I am proud of my heritage. When I am showing that, I show other people … people who could be Native American, Muslim, black, or Latino … they can be who they are. It doesn’t matter what the media tells them, just be proud of who you are.”

As for the secret to finding success in a challenging world, Hamasaki offers the following sage advice: