On the brink of history 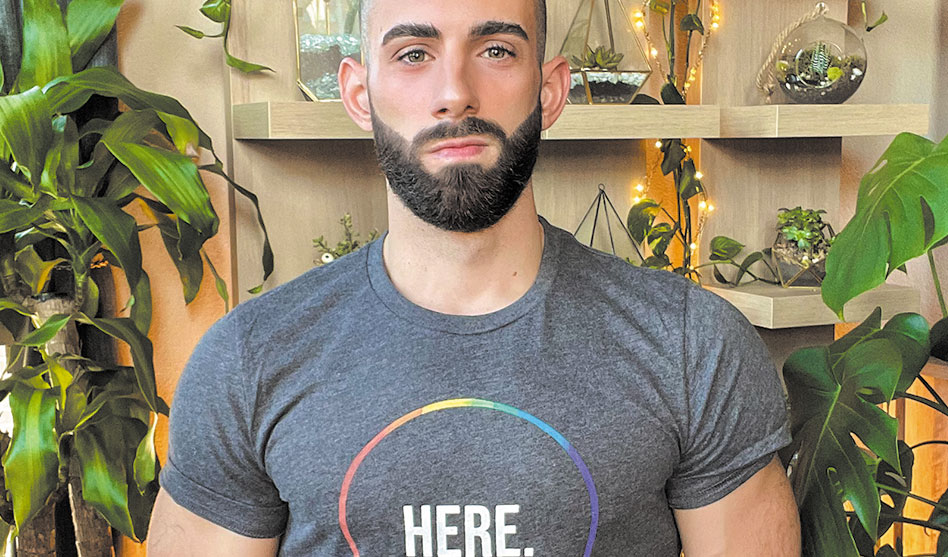 Timothy LeDuc wants everyone to know they are here.

Timothy LeDuc is poised to become the first openly non-binary athlete to compete in the Olympic Winter Games, starting this week in Beijing. LeDuc and their ferocious partner, Ashley Cain-Gribble, were named to the Olympic team in January after winning the U.S. Nationals Pairs title for the second time and are representing the United States at the 2022 Winter Olympics. The figure skating team event and Opening Ceremonies began Friday, Feb. 4 (Beijing time). 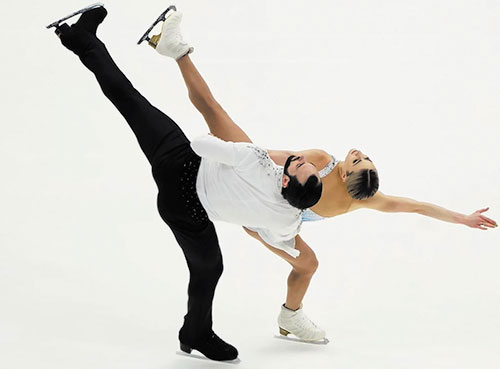 Though the North Texas-based team has achieved many goals, that success hasn’t come easily. “Both Ashley and I have had to forge our own paths to find our success,” LeDuc said in a recent email. “For me as an openly queer athlete and for Ashley as a taller pair girl, we have both been told we don’t belong.

“Despite not seeing ourselves represented in the archetypes of success in our sport, we are here as two time national champions headed to the Olympics,” LeDuc continued. “Our hope is that when people see us skate and hear our story that they are inspired to lead with authenticity and with what makes them unique and different. We hope we are making space for people to come into figure skating and never feel shame but instead feel like what makes them unique and special will be celebrated.”

While the team’s main rivals, Alexa Knierim and Brandon Frazier, did not compete at Nationals due to a positive COVID test for Frazier, Cain-Gribble and LeDuc claimed their victory in convincing fashion, including earning a record-breaking U.S. Championship score in the Short Program.

But the National Championships are not an Olympic Trials event, so their victory there didn’t necessarily make LeDuc and Cain-Gribble a lock for the Olympic team. A selection committee met after the event to decide on the two available U.S. pairs spots, considering results dating back to the 2021 U.S. Championships. Although they are a relatively new team (having both competed with other partners), it was no surprise that Knierim and Frazier were chosen for the second spot for the Olympics. Going into 2022 they were the reigning U.S. pairs champions.

LeDuc (whose pronouns are they/them) isn’t the lone queer athlete at 2022 Nationals. Openly gay single’s skater Jason Brown snatched silver at Nationals and qualified for his second go at the Olympic games. He won a bronze medal in the Team Event at the 2014 Olympics in Sochi.

But things didn’t go so well for out queer skater Amber Glenn, also based in North Texas, in women’s singles. She was struck by the COVID curse and tested positive after the Short Program, forcing her to withdraw from the competition. It was a heartbreak for her but also for Cain-Gribble and LeDuc; the three are close friends and training mates at the Children’s Health StarCenter rink in Euless. Glenn was named as an Olympic alternate on the U.S. team.

All told it’s speculated that there will be at least 34 publicly out athletes competing in Beijing according to Outsports, the world’s leading LGBTQ-sports publication.

The troubled Beijing Olympics present a number of challenges, and, of course, COVID is one of them. The athletes, support staff, volunteers and journalists will all be kept in a “closed loop” environment to prevent any contact with the population and limit the risk of exposure.

Cain-Gribble and LeDuc will stay in the Olympic village and travel only to practice and competition venues. There will be no public audience — only invited guests from China — and no international spectators.

Cain-Gribble had to leave her handsome hubby, Dalton, here at home in the Metroplex. The only up side is that he will be available to do doggy duty for the furkids, Mylo and Nash, while she skates in China. 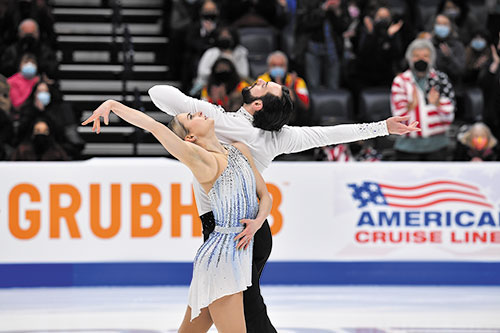 Ashley Cain-Gribble and Timothy LeDuc are equals, on the ice and off. (Photo Courtesy Jay Adeff/U.S. Figure Skating

The COVID curse may well cast a pall over these games; already several favored athletes have been forced to withdraw due to testing positive for the virus. But it’s still the Olympics, and most have trained their entire lives for this moment.

“I always wanted to be a part of the Olympic movement,” said LeDuc. “I trained and showed up to practice every day, like an athlete that wanted to be at the top in their sport, and that’s something I am proud of myself for. I’ve always had this vision of myself being on the ice at an Olympic Games. The path has not been linear, it’s had a lot of twists and turns, but I always tried to stay true to my goals.”

Being true to oneself while being an out non-binary person competing on a world stage might prove challenging: “It can be really easy to internalize other peoples’ perception of you, and it can be easy to feel invalid in your queerness depending on your environment,” Leduc acknowledged.

“Sometimes just taking a second to look at yourself in the mirror and allowing yourself to only focus on your experience and self-perception can go a long way in helping to develop an untouchable sense of self,” they continued. “Sometimes I just need to take a second to remind myself that I only ever have to be Timothy and no one else.”

Although LeDuc has gotten the lion’s share of media attention since qualifying for the Olympics, they are very fast to point out that they didn’t do it alone. LeDuc and Cain-Gribble are equal, on the ice and off.

“I’m so proud of Timothy and am here to support them in every way,” said Cain-Gribble. “We have always had a strong relationship. It’s really special when you get to do something like this with someone who is as driven and passionate about their goals as you are.

“With them being out as non-binary, it allows them to live their life authentically. I see this translate over to their skating because when they step on the ice they know that they are being fully themselves out there and can embrace that,” she said.

Cain-Gribble and LeDuc are more than a team, more than a partnership. They are an exquisite blend of elegance, strength and awareness. They have grit; they have grace; they have each other.

The original Olympic motto “Faster, Higher, Stronger” — or in Latin, “Citius, Altius, Fortius” — was adopted by Pierre De Coubertin, considered the founder of the modern Olympics, in the 19th century. In 2021 the motto was updated. In Latin it now reads, “Citius, Altius, Fortius — Communiter.” That translates in English “Faster, Higher, Stronger — Together”

And that’s just how Ashley Cain-Gribble and Timothy LeDuc face the ice: Together.

Watch for updates online at Dallas Voice. The Olympic Games are being broadcast on the networks of NBC and streaming on Peacock.com. Check local listings.