On his own terms: Richard Curtin’s new artist life

Richard Curtin in his studio 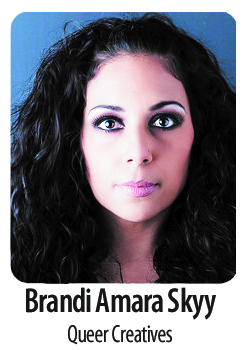 The first time I met Richard Curtin, I was standing in line getting a sandwich at Buli. As I went to pay, I looked down at the tasty treats surrounding the register and saw a stack of CDs for sale. The CD was called All The Lives Of Me, and it was by an artist I did not know named Richard D. Curtin.

Each person pictured on the CD cover looked completely different from the other — a man with slicked-back long hair gathered in a ponytail wearing a tux and singing into a 1950s microphone; a trailer-park-looking drag queen; a biker who looked eerily like Meatloaf, and an average-looking guy in shorts next to his dog.

I thought to myself that it was so cool that Buli was supporting local artists and singers. What I didn’t know was that the man, drag artist and artist pictured on that CD would become a prominent figure, friend and mentor in my life.

When most people hear the name Richard Curtin, they immediately think “Edna Jean Robinson” — and vice-versa. Both names are attached to a rich drag legacy in Dallas.
Some immediately associate those names with his 16-year tenure as the Rose Room show director, or maybe with one of her kitschy songs — “Boobs for Christmas” or “Shopping.”

Maybe they watched Edna’s Angels on a Thursday night at JR.’s. Or maybe they donated to or attended her annual Edna Jean Trailer Park Christmas event benefiting Sam Houston Elementary School that she started back in 1993.

Maybe the associations go further back, to The Edna Jean and Pitiful Show that ran from 1998 to 2000, or to the infamous drag queen mud wrestling.

There are so many wonderful events, shows, fundraisers, and memories that Edna is attached to.

I love and admire Richard for all of the above. But it is the one thing he has done off the stage, away from the spotlight and out of drag that inspires me the most. 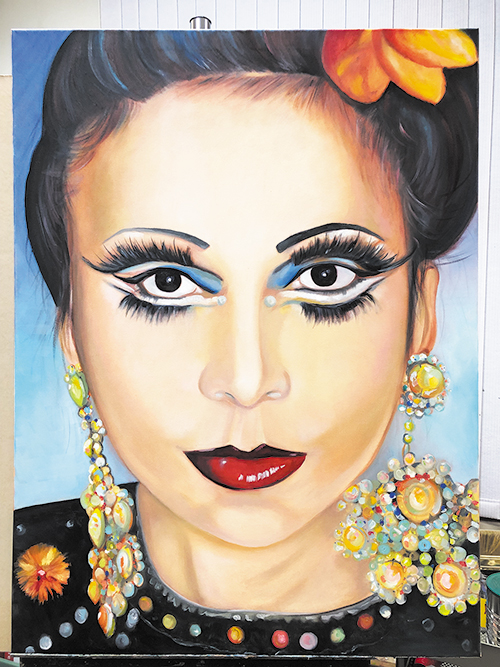 In August of 2017, Richard decided to take a break from city life and move to West Texas and go back to school and get his master’s degree at Sul Ross University in another art form, one that — along with singing, acting and drag — meant a lot to him: Painting.

I remember the first time I visited Richard’s eclectic home. His walls were full of paintings from a variety of artists as well as his own 1991-95 HIV series, Men and Women On The Moon. His paintings outshone all the others. Each piece was colorful with big, bold strokes and a hint of surrealism masked as playfully distorted reality.

His paintings now? Even better.

I have not seen any of my friend’s new paintings in real life, but I will finally have my chance at his first art show back in Dallas on Saturday, Nov. 23, at Cedars Open Studios.

And while I’m excited to see them all — the landscapes, the drag queen portraits of my friends and family — I have to admit, I’m most excited about seeing my own portrait.

When I sat for the photograph that would inspire his painting, I remember the energy of the room shifting when he picked up his camera. With each flash and direction, I become more and more captivated and more and more aware that I was in the presence of a great artist.

It wasn’t something he or anyone else told me. It was something that I felt. If art recognizes art, then I was witnessing and experiencing first-hand the grandness, depth and scope of his artistry.

THAT was what he captured in the two-dimensional space of his painting of me — a deep respect and desire to be a better artist, because I was being photographed and painted by a great one.

And while I’ve seen photographs of the painting in progress, I have never experienced the finished painting in the flesh. And that’s what I’m most excited about seeing.
Well, that and hugging the neck of my friend that I haven’t seen in two years!

When I asked Richard what this art show is about, he said, “It’s comprehensive of what I have been doing for the last three years of my life — living creatively!”

But I was even more curious to know — after knowing him only as a drag artist, singer and actor for so long — how long he had been painting?

He told me the story:
“I began to paint very early, 5-8 years old. My mother would give me cards, and I would copy the flowers on them and make new cards for her.

“In the early ’90s, AIDS was a huge influence in my early work. I started painting people living with and dying of AIDS. My first show exploring these themes was exhibited at the Art

House and Museum Gallery in Deep Ellum. It was a way for me to heal, to remember and immortalize their beauty.

“I was also giving AIDS a face that wasn’t always a gay man. I painted women and straight couples. It was my therapy. It has always been my goal to retire and paint.” 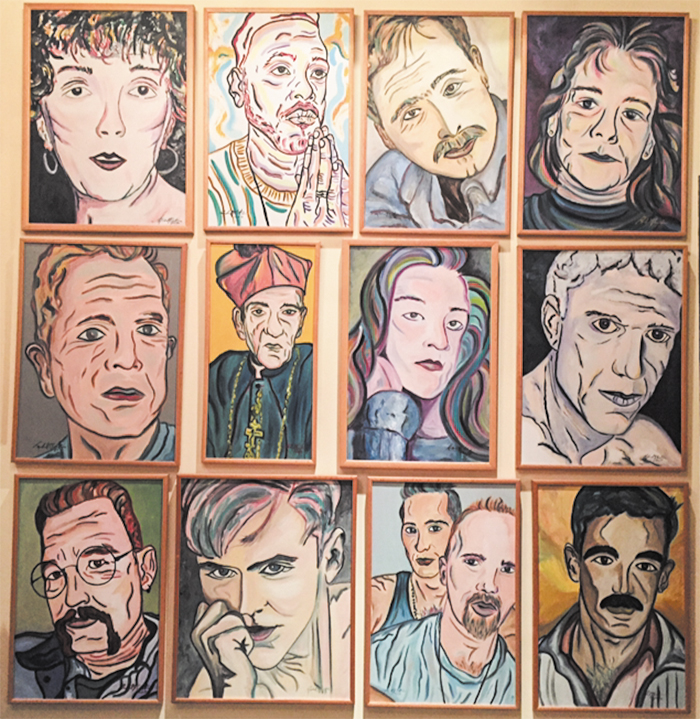 But it was his last sentiment that struck a resonating life/goal chord in me: “I intended to find fame and fortune and retire as the reclusive Greta Garbo and paint in my studio by the sea. I have sort of done that.”

He is living his dream — a dream that, if I’m being honest with myself, has always been mine, too.

If this piece feels and reads like some kind of fangirl love letter, it is. There are very few people, let alone artists, left in this world like Richard. He is the quintessential Renaissance Man, a person who is great at many things — drag, singing, acting, comedy, painting. But he is also the kind of person that inspires us to evolve beyond our current situation, to take what could be one of the worst experiences in our lives and transform it into our greatest achievement.

Because that’s exactly what he’s done.

And out of all of Richard’s legacy, out of the many things he has done or created, this show, in my humble opinion, is his magnum opus, his greatest show on earth thus far. Because it is the result of an artist who has seen and experienced so much life now living off the grid, giving the time, space and energy necessary to marrying all that experience, all the many mediums of art and characters that live inside him, and bringing it all to life in every brushstroke on canvas.

The result is the amalgamation of one of Dallas’ most gifted multi-meda artists, living creatively on his own terms.