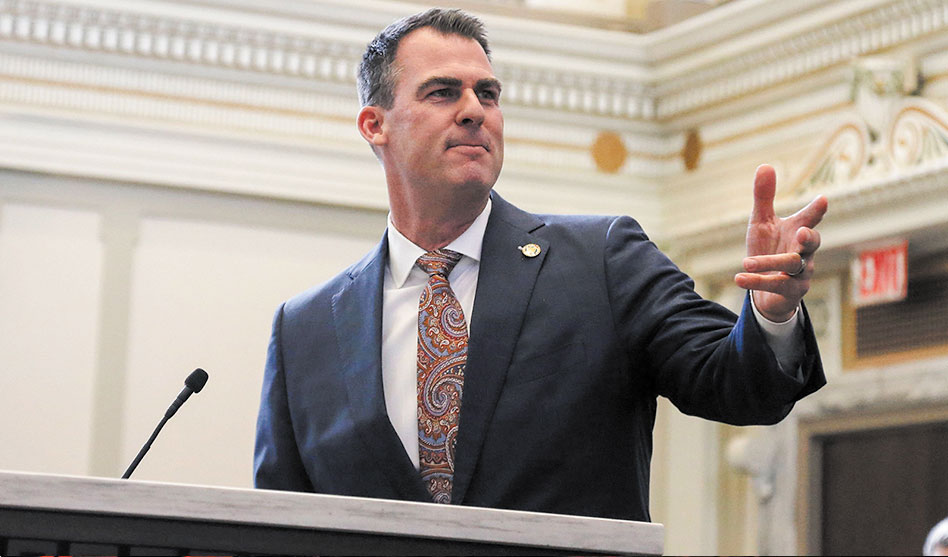 Oklahoma Gov. Kevin Stitt, pictured here giving his State of the State address in Oklahoma City on Feb. 7, is being sued by Lambda Legal over his decision to prohibit the state from correcting birth certificates for transgender people. (Stephen Pingry/Tulsa World via AP File)

Lambda Legal has filed a lawsuit in Oklahoma challenging an executive order issued by Gov. Kevin Stitt prohibiting trans people born in the state from correcting the gender marker on their birth certificates.

Before the executive order was issued on Nov. 8, 2021, the Oklahoma State Department of Health allowed trans people to correct their birth certificates so their gender marker matched their gender identity. A trans person could receive a court order and present it to OSDH, which would issue the new document.

Since the executive order, OSDH has refused to comply with those court orders.

Three plaintiffs include Rowan Fowler, Allister Hall and a third person, who preferred to remain anonymous and is referred to as C.R.

“A birth certificate is a critical and ubiquitous identity document used in many settings to verify a person’s identity,” Lambda Legal argues in its complaint. Employment, education, housing, health care, voting, banking, credit, travel and access to a variety of government services, as well as obtaining a driver’s license and passport, are all contingent on a birth certificate “that reflects a person’s true identity,” the complaint notes.

The lawsuit points out that not only does the governor’s order contradict the policy of most other states, it contradicts the state’s own policy prior to Nov. 8 for birth certificates and current policy for changing sex designations on Oklahoma driver’s licenses.

In a recent Texas case, Lambda Legal accuses Gov. Greg Abbott of creating new law when he issued an executive order that changed the definition of child abuse in the state to include providing gender-affirming treatment to a minor. But according to Lambda Legal Senior Attorney Shelly Skeen, although the issue in the Oklahoma case revolves around an executive order, this case isn’t based on creating or changing state law.

“There is no Oklahoma statute prohibiting OSDH from changing the gender marker on people’s birth certificates to match their gender identity,” Lambda Legal states in its lawsuit.

The governor has ordered the state’s Department of Vital Statistics not to issue new birth certificates to trans folks. So the Oklahoma case is instead based on due process, equal protection and free speech, Skeen said.

The U.S. Constitution’s free speech protection also prevents the government from compelled speech. That speech is compelled when a person must explain why documents don’t match a person’s gender expression.

Skeen gave traveling through airports as an example: “We have a constitutionally protected right to travel,” she said. But trans people whose documents are inconsistent with their identity are regularly singled out and searched.

The due process clause in the U.S. Constitution provides that no state shall “deprive any person of life, liberty, or property, without due process of law.”

“There’s no reason to single out trans people,” Skeen explained. Not having accurate documents that reflect who that person is may deprive a person of getting a loan, mortgage or a job, thus depriving them of property without due process of law, for example.

And Skeen explained her equal protection argument saying, “Everyone is entitled to identity documents that match who they are.”

Among the things the clients in the lawsuit have been denied without accurate identification are healthcare, housing and credit cards.

In the lawsuit, Lambda Legal argued “there is no governmental justification to support Oklahoma’s refusal to provide transgender people with accurate birth certificates matching their gender identity and without disclosure of their transgender status.”

“There is a medical consensus that gender identity is innate, has biological underpinnings (including sexual differentiation in the brain), and is fixed at an early age,” the lawsuit argues. As such, efforts to change a person’s gender identity are unethical and harmful to a person’s health, dignity, and well-being.

“Attempts to change a person’s gender identity to bring it into alignment with the person’s sex assigned at birth are not only unsuccessful but also dangerous, risking psychological and physical harm, including suicide,” the lawsuit continues. “Living in a manner consistent with a person’s gender identity is critical to the health and well-being of all transgender people. If left untreated, gender dysphoria may result in serious consequences including depression, self-harm, and even suicide.”

Depriving people of a corrected birth certificate forces transgender persons to reveal information about themselves that could otherwise remain undisclosed. Birth certificates that don’t accurately reflect the trans person’s sex “exposes that person to serious invasions of privacy,” the lawsuit contends.

The result of using inconsistent documents, Lambda Legal argues in its lawsuit, is that trans people experience high rates of discrimination. That includes being denied service, being asked to leave public accommodations and being subjected to harassment and violence.

Skeen said the executive order makes Oklahoma one of only two states that currently won’t correct a birth certificate for a transgender person. Tennessee is the other, and Lambda Legal has pending litigation in that state as well.