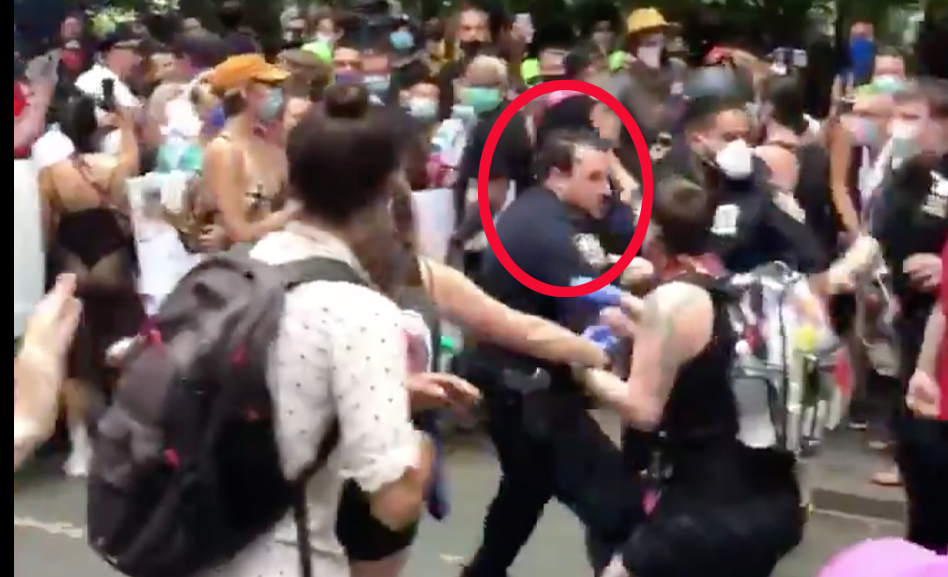 This screen cap from a video posted on Twitter by NYC activist Eliel Cruz, shows officers pushing through the crowd, including one officer in particular, circled in red, who rushed back and forth, using his baton as a shield to push marchers out of his way and screaming at people to get out of the street. Images posted on Twitter by @confident_wrech, below, show the same officer, circled in yellow, and suggests he “clearly has issues with queer folk.”

In an event reminiscent of the 2009 raid on Fort Worth LGBTQ bar Rainbow Lounge on the 40th anniversary of the Stonewall Riots, New York police officers attacked participants in the Reclaim Pride rally and march with pepper spray and batons on the 51st anniversary of Stonewall, right there in the city where it all began. 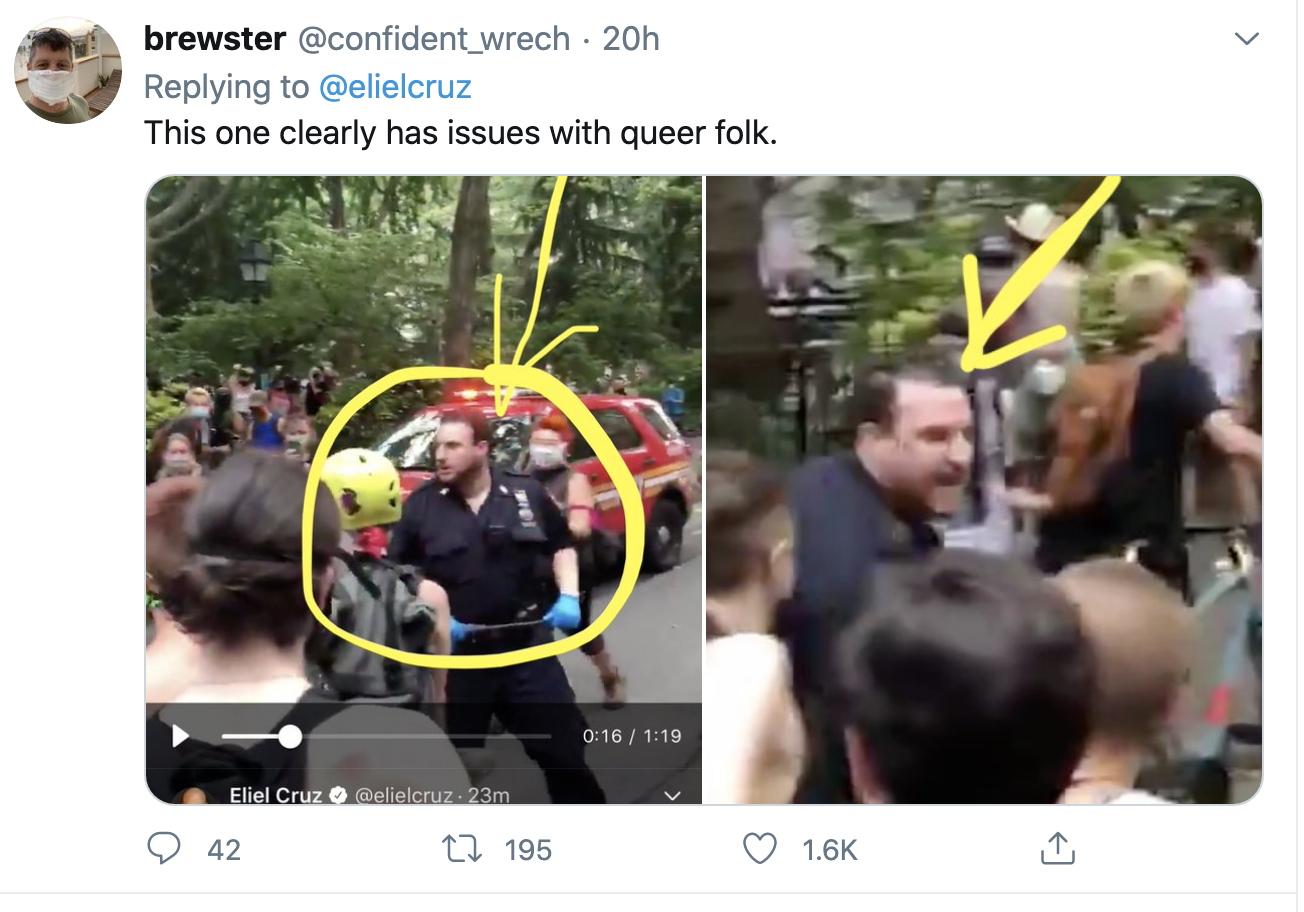 According to multiple news reports and video shot by witnesses, although the Reclaim Pride event was moving along peacefully throughout the day, just before 4:30 p.m. as about 2,000 marchers — most of them masked — entered Washington Park, they were confronted by officers who claimed someone had tried to vandalize an NYPD vehicle with graffiti.

Videos show the officers, some of whom were not wearing masks, rushing into the crowd of protesters, cursing at them, shoving and hitting them with batons and, in some instances, using pepper spray. One video shows an officer using his baton to knock down a protest on a bicycle.

March organizer Jake Tolan condemned the officers;’ actions, noting again that it came on the anniversary of the Stonewall Riots, the 1969 riots sparked by a police raid on the Stonewall Inn that is seen at the birth of the modern LGBTQ rights movement. “Fifty-one years after the Stonewall Rebellion, the NYPD is still responding to peaceful, powerful, righteous queer joy with pepper spray, batons, and handcuffs,” Tolan said in a statement.

According to WABC TV, New York City’s ABC affiliate, the attack by police started when they caught Michael Dunn, 29, writing graffiti on an NYPD cruiser. Dunn and two other people, Millen Dang, 20, and Jacob Kruger, 25, were all charged with assaulting a police officer, resisting arrest, and obstructing governmental administration.

WABC TV also reports that the night ended with more violence when a 25-year-old man and two women, ages 21 and 24, were slashed in an attack around 2:30 p.m. on Christopher Street in Greenwich Village. The three were taken to Bellevue Hospital in stable condition, the TV station reported.

The attack also came one year after former Police Commissioner James O’Neill finally apologized to the LGBTQ community for NYPD’s actions during the 1969 Stonewall riots.

Fort Worth police officers and agents with the Texas Alcoholic Beverage Commission made headlines around the world on the 40th anniversary of the Stonewall Riots in 2009 when they launched a raid on the newly-opened Rainbow Lounge bar, arresting patrons and leaving one man with a severe head injury. That incident sparked a renewed activism with Fort Worth’s LGBTQ community that led to the city instituting and TABC instituting ongoing training. It also prompted the city of Fort Worth to update and improve its policies affecting LGBTQ residents and city employees.