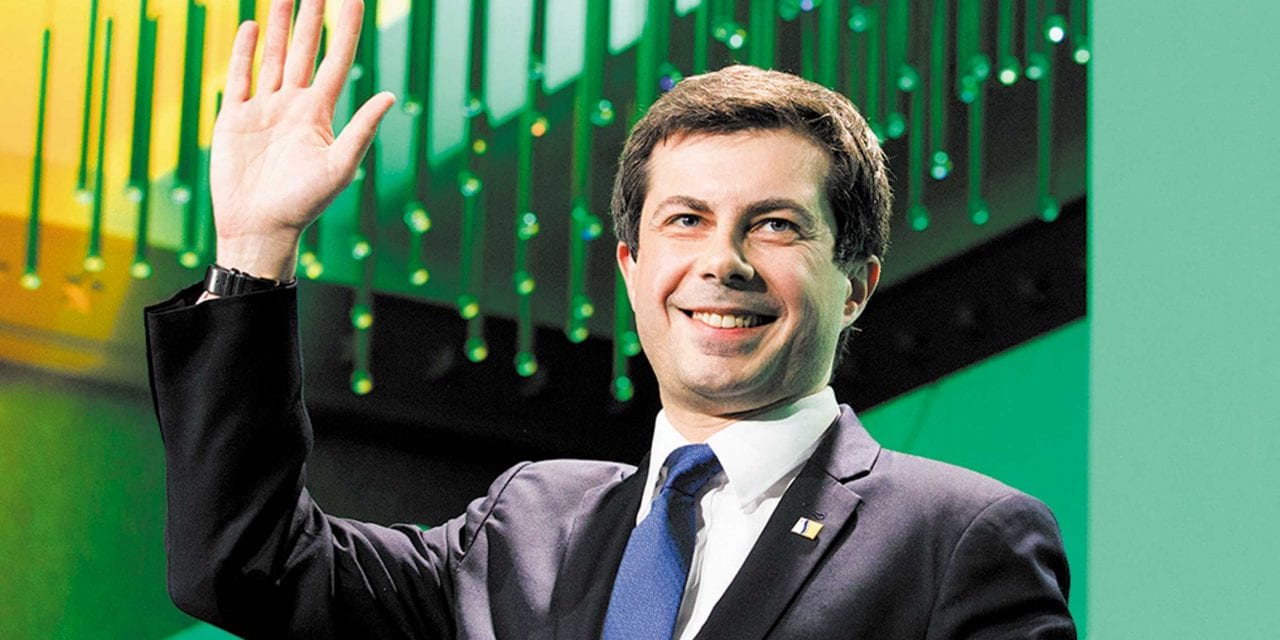 The news, though based on a relatively small sampling, marks an astonishing milestone for an openly-gay candidate for the presidential nomination of one of the two major parties. Only one other openly gay person has ever tried to run for a major party presidential nomination — Fred Karger, who ran for the Republican nomination in 2012. Karger beat eventual nominee Mitt Romney in one New Hampshire college straw poll, but he never made it onto a nationally-televised debate stage, and he appeared on the primary ballot in only six states.

Buttigieg’s bid for the Democratic presidential nomination has fared much better, so far. He’s been the subject of many mainstream media profiles and opinion pieces. The New York Times said Buttigieg has “generated more buzz” than New York City’s well-known Mayor Bill de Blasio,” who is also running for the Democratic presidential nomination, and the Washington Post said he’s drawn “enthusiastic crowds of hundreds” in South Carolina.

Buttigieg has appeared on numerous nationally-broadcast political programs, including a one-hour CNN Town Hall on March 10. His performance at that event prompted former President Obama’s chief campaign strategist, David Axelrod, to post on Twitter, “I have rarely seen a candidate make better use of televised Town Hall than [Buttigieg] is on [CNN]…. Crisp, thoughtful and relatable. He’ll be a little less of a long shot tomorrow.”

Fighting for the national stage

There’s another nationally-televised stage serious candidates want to be on: the Democratic presidential primary debates. The first one is in June, and the party wants to limit the number of candidates on stage to 20, possibly spread over two different nights. To be included on the stage for the debates, a candidate must, in the next three months, achieve support of at least 1 percent of respondents in at least three national polls approved by the Democratic National Committee.

Though it is not a national poll, a poll by Emerson College of 249 Iowa Democratic caucus-goers between March 21 and 24 found Buttigieg in third place, with 11 percent their support. (The margin of error was plus-or-minus 6.2 points.)

Emerson Poll Director Spencer Kimball called Buttigieg’s third-place finish “the biggest surprise” of the poll, noting that “last week we saw him inching up in our national poll, and now he’s in double digits in Iowa.”

Buttigieg was a zero when Emerson polled caucus-goers in January.

More than 200 people have notified the Federal Election Commission of their intention to seek the Democratic nomination. Pollsters cannot survey the public about all 200 candidates, so they have to choose which candidates’ names to include in their surveys and which to leave off.

This year, the Democratic National Committee said it would use an additional gauge to determine who reaches the debate stage: those candidates who report getting contributions from 65,000 people, from at least 20 different states and with a minimum of 200 donors per state.

Buttigieg said on Twitter on March 16 that his campaign has received contributions from more than 76,000 individuals. And campaign spokeswoman Lis Smith told CNN the campaign has raised at least $1.6 million since the CNN Town Hall.

But the Democratic Party plans for the debates also noted that, if more than 20 candidates meet just one criterion, the DNC will pare down the number to those candidates who meet both criteria. And if there are still too many candidates, the debate slots will go to the qualifiers with the highest polling averages.

So, even if Buttigieg gets 1 percent in a third poll and has 76,000 donors, he could potentially be barred from the stage. But his unusually successful campaign to get the media’s attention thus far could well put him among the highest polling candidates come June.
Meanwhile, March 31 is the next deadline for presidential candidates to report to the Federal Elections Commission how much money they have raised for their campaigns. Many media organizations will use those dollar figures to assess how much traction each candidate is getting.

The implausibility and the difference

To some extent, Buttigieg’s success in getting media attention — and thereby the attention of the public — is due to his being gay. He is — apparently — the only openly-gay candidate among more than 600 people who have filed notice of wanting to run, either as a Republican, a Democrat, with another party or as an independent candidate. Nowadays, almost everything gay gets attention from the mainstream media and, for a candidate who was virtually unknown three months ago, such attention generates more attention.

But Buttigieg’s success so far seems to be fueled by his very serious, very intelligent and very down-home likeable personality. When MSNBC’s Morning Joe asked him to “tell us about your faith,” he noted that he’s Episcopalian, that his church takes seriously its role in the urban community of South Bend, and that he thinks candidates should “have the option to talk about our faith.

“Don’t get me wrong: I believe strongly in the separation of church and state. I think any [candidate] needs to demonstrate how they will represent people of any faith, people of no faith, “Buttigieg said. “But I also think the time has come to reclaim faith as a theme.

The idea that the only way a religious person could enter politics is through the prism of the religious right — I just don’t think that makes sense.”

Buttigieg said he thinks it is time for “more of a religious left to emerge in our country.”

At the CNN Town Hall on March 10, nationally televised from Austin, the first question out of the chute from the audience was why Buttigieg thinks he is qualified to run the country when he’s not held elective office at even the state or congressional district level.

Buttigieg has been asked that many times, and his answer is consistent: being a mayor of a city of any size is the “best kind of preparation you can have.” And, he noted, “I have more years of government experience under my belt than the president,” “more years of executive government experience under my belt than the vice president,” and “more military experience than anybody to walk into that office on Day One than since George H.W. Bush.”

Buttigieg was the first Democratic candidate to appear on Fox News Sunday with Chris Wallace. There, he said “I’m not like the others,” noting his age (37) and generation, being from the Midwest, and having served in the military. When prompted to say another

Democratic candidate was “wrong” about an issue, he said, instead, “I’d do it differently.”

In each venue, Buttigieg has moved easily through a wide range of topics — from job security and training, income supplements,

Venezuela’s political unrest, and transitioning veterans into civilian life to the power of businesses to grow the economy, the war in Afghanistan and whether Congress should regulate Facebook and impeach President Trump.

(On the latter, he said he would prefer voters remove Trump from office.)

Buttigieg neither avoids nor insists on acknowledging his sexual orientation and makes a point to introduce his spouse, Chasten, to most audiences, though most moderators find a way to broach the subject.

And then there is his biography, detailed in The Shortest Way Home (W.W. Norton): He is a veteran of the war in Afghanistan, a Rhodes scholar to the University of Oxford, a business analyst for a global management consulting firm and a popular mayor of South Bend, Indiana’s fourth-largest city.

“Why are you in such a hurry?” asked Fox’s Wallace near the end of his March 17 interview, which — oddly — did not once bring up Buttigieg’s sexual orientation. “Why not wait a few years, get more experience, build a bigger record, get better known and run for president at, say, the ripe old age of 41?”

Buttigieg said he has taken into consideration both “the moment” in American history, “what is called for” in this moment, and “what I bring to the table.”

“I see it as a very unusual moment. Look, it’s unusual for it to be even plausible that a 37-year-old Midwestern mayor is giving national interviews for a possible candidacy for president,” said Buttigieg. “But there’s something that’s happening right now that calls for something completely different than what we’ve been seeing — generationally different, regionally different, somebody with a different story and a different background.”