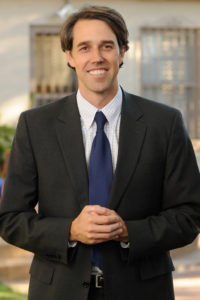 In addition, Texas has five new Democrats in its delegation including strong LGBT allies. Locally, that includes Marc Veasey of Fort Worth.

Elsewhere in Texas, Beto O’Rourke, whose district includes El Paso and far west Texas, worked hard for the LGBT community when he served on the El Paso City Council.

O’Rourke recently sat down with Dallas Voice to talk about a wide range of issues, including his long-running support for LGBT equality.

In his primary campaign, O’Rourke said he called marriage equality a core civil rights issue. He said position on the issue was a reason he unseated incumbent Rep. Silvestre Reyes.

O’Rourke said he’s Catholic as well but believes in a woman’s right to choose and believes that marriage equality is a basic civil right and a federal issue. Those stands in the primary and general election helped him, he believes.

“What’s remarkable is how tolerant El Paso is at its core,” he said.

In the general election, his Republican opponent tried to make marriage equality an issue.

“My opponent ran against me on family values,” he said. “It was so easy for me to talk about that.”

He said when she attacked him for supporting marriage equality, he talked about same-sex couples establishing stable homes and stable relationships and how those things were good for their children.

O’Rourke was not surprised by the support he received in his El Paso district or that Mary Gonzalez, who identifies as pansexual and will represent a portion of his district in the Texas Legislature, was elected. He said in 1957 his city was the first in the south to elect a Mexican-American mayor and was the first to desegregate.

He said that opposition to partner benefits in El Paso was started by a small group and he thinks the vast majority of people opposed to the ordinance were expressing a general frustration with government. Others told him, “I don’t get that benefit at my job. Why are you offering it?” he said.

After O’Rourke returned from a congressional orientation, he said his impression of the incoming class of representatives — both Democrats and Republicans — is that their election was a reaction to the extremes that were elected in 2010. He called the group of incoming Republicans he met “good people.”

He mentioned a number of Democratic newcomers that he’s excited to be working with. Among them is Sean Patrick Murphy who worked in the Clinton administration and is the first gay representative elected from New York.

“Talk about someone who’s going to be effective,” he said.

He called Hawaii’s Tulsi Gabbert, the first Hindu elected to Congress, an indication of the diversity of the incoming class. And he looked forward to getting to know Veasey.

O’Rourke said he will co-sponsor the repeal of the Defense of Marriage Act and hopes Congress will move on immigration reform. Although he called the Dream Act important, he said the way that bill disproportionately benefits gays and lesbians — with no alternate path to citizenship through marriage to a U.S. citizen — shows how important marriage equality is.

He hopes to help shape the debate in Congress on border security, trade and the drug war. His book Dealing Death and Drugs puts him in the minority of Texas politicians calling for the legalization of marijuana but his main argument in the book is that the drug war isn’t working.

“What we’re doing now is just not working for anyone on either side of the border,” he said.

He will serve on the House Committee on Homeland Security.