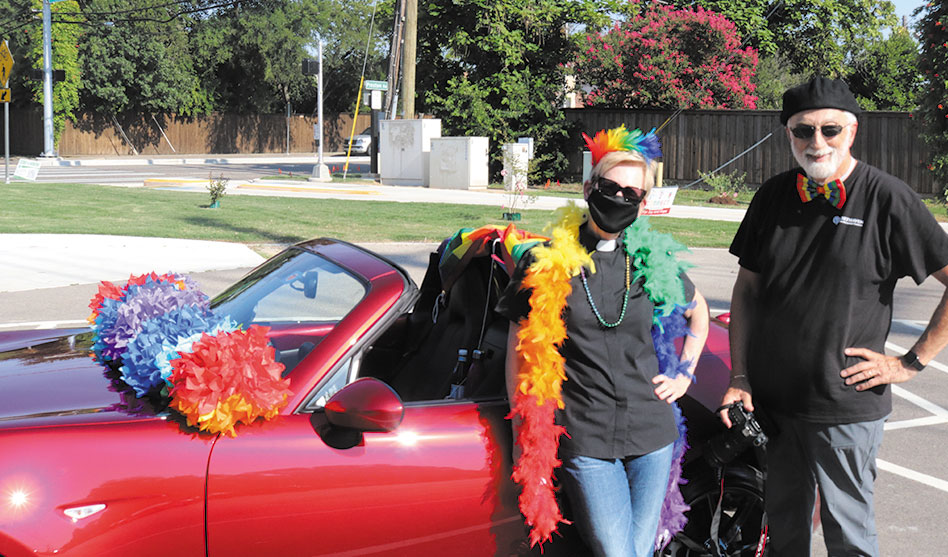 Former Northhaven pastor the Rev. Marti Soper and her husband led the 2020 parade at the church.
(David Taffet/Dallas Voice)

For most of the LGBTQ community, Pride means a parade. Dallas Pride is putting on a wonderful event this weekend at Fair Park, but the Alan Ross Texas Freedom Parade won’t return until next year.

So, do you need a parade? If so, then Northaven Church has you covered.

For the second year, Northaven is staging a parade — small, socially distanced and safe. And everyone’s invited.

The parade takes place on and around Northaven’s property at 11211 Preston Road on Saturday, June 5. Gather at 4 p.m. in the south parking lot off Preston Road, where participants will decorate their cars for Pride.

Then the parade steps off promptly whenever all the cars participating are decorated and ready to go.

According to Bob Roton, one of the organizers, the Rev. Ann Willet will lead the parade in a red convertible.
“We love celebrating Pride,” he added.

The route is short — from the south lot, around the building to the north lot, exiting onto Northaven Road and down Preston Road back into the South lot. And last year, because everyone was having so much fun, they drove the route a second time.

While last year’s parade was small — fewer than 50 cars — they stopped traffic for a few minutes on Preston Road.

And isn’t that a goal of Pride — making others take notice?

“Last year, we wanted to do what we could in a safe environment,” Roton said. “We came together — masked and distanced — and did what we could safely do during a tough time.”

He said he is excited that Congregation Beth El Binah, which also meets at Northaven, would be joining this year.

Bring a picnic supper and stick around after the parade to enjoy dinner on Northaven’s shaded grounds. And, finally, at 8 p.m., they’ll watch a stream of the performance of Dallas Pride at Fair Park, which will be projected on the building’s south wall.