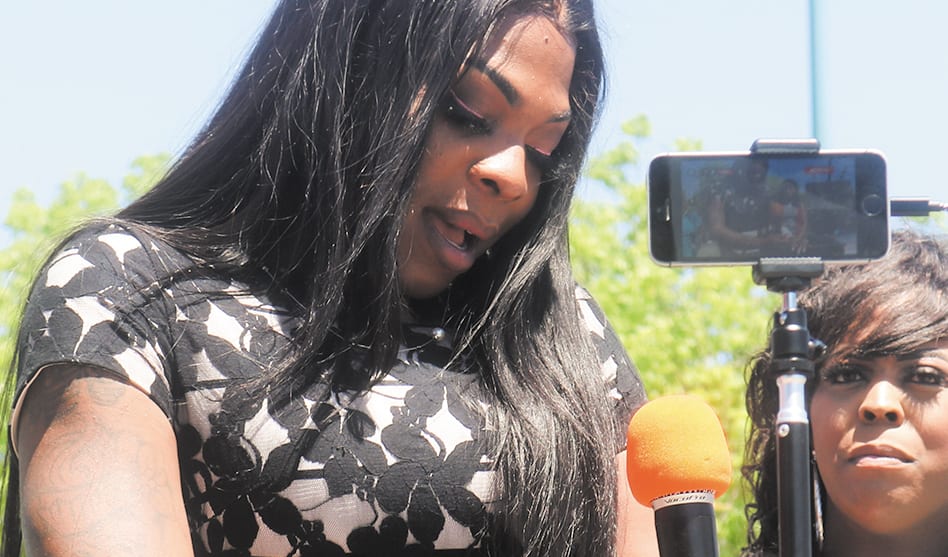 Muhlaysia Booker, speaking at a rally in April after she was assaulted. Photo by David Taffet

The Dallas Voice joins our community in grieving the murder of Muhlaysia Booker.

At about 6:44 a.m. Saturday, May 18, officers responding to a shooting call in the 7200 block of Valley Glen Drive, found a black woman lying face down in the street, “deceased from homicidal violence.”

Today, at approximately 3:00 p.m., police identified that woman as Muhlaysia Booker, the transgender woman beaten in the parking lot outside her apartment in South Dallas on April 12 as a crowd looked on and cheered.

That attack occurred after a minor car accident. Booker told police she had accidentally backed into another car in the parking lot, and that the other driver had pulled a gun on her, refusing to let her leave unless she paid for the damage. A crowd soon gathered, and someone paid a man, identified as Edward Thomas, $200 to beat Booker, laughing and jeering and videoing as he assaulted her.

Thomas was arrested and faces charges of aggravated assault/hate crime. He was not in jail when Booker was murdered.

Police have asked that anyone with information regarding the murder of Muhlaysia Booker contact Homicide Detective David Grubbs at 214-671-3675 or via email at david.grubbsjr@dallascityhall.com. Refer to Case Number 098748-2019.

Muhlaysia Booker is the fourth transgender woman murdered this year in the U.S. Dana Martin, 31, was shot to death Jan. 6 in Montgomery, Ala. Ashanta Carmon, 27, was shot to death in Prince George’s County, Maryland, on March 30. Claire Legato, 21, was shot on April 15 in Cleveland, Ohio, and died in a hospital there on May 14.

Abounding Prosperity Inc. is extremely saddened and shocked at the news of the murder of our sister, Muhlaysia Booker. Muhlaysia was a courageous young woman who was seeking justice for the brutal attack launched against her on April 12, 2019. To learn today that her young life was taken by homicidal violence is heartbreaking, yet it inspires us to further demand justice on behalf of our fallen sister. This incidence of African-American transwomen being murdered has become too frequent, and it must be stopped.

AP Inc. extends our sincerest condolences to the family of Ms. Booker and are in the process of communicating with her family to extend our helping hand of support. We will stand strong and firm with the family in honor of Ms. Booker’s life.

AP Inc.’s CEO Kirk Myers said,“My sympathy is with the family and the community because this is a tragic loss for our community. This tragedy has impacted me personally and professionally. We are preparing to assist as necessary to ensure justice is achieved for Muhlaysia and will continue to lead the black LGBTQ community, which is tired of the violence and intolerance so frequently directed against it.”

We DEMAND Justice for Muhlaysia Booker!

AP Inc., a nonprofit corporation founded in November 2005, continues to be a beacon of light in the Dallas community providing services that address health, social and economic disparities among Black Americans with a particular emphasis on gay & bisexual men, cisgender women, transgender women, and their families.

All requests for comments can be directed to our media contact, Ahmad Goree. ##

A statement from Resource Center

Muhlaysia Booker was a daughter, friend and valued member of the North Texas transgender community. Resource Center grieves her murder and calls on the public and Dallas Police Department to help identify those responsible for it. The Center is awaiting word on memorials, vigils and/or services and will share that information once received.

It is with profound sadness and anger that Booker’s name will be added to a growing list of primarily black transgender women who have been murdered in the past year. With the 50th anniversary of Stonewall fast approaching, a movement led by transgender women of color, we must remember their legacy. When Booker’s vigil is announced, take a stand, show up in force, and make our collective voices heard.