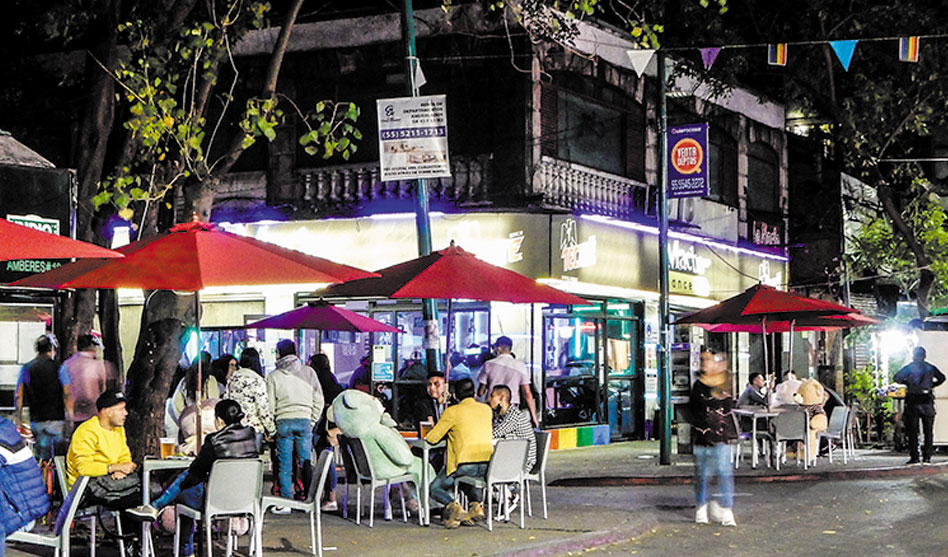 Embracing life during a pandemic

MEXICO CITY – Like most major cities, Mexico City shut down for a while at the beginning of the COVID-19 pandemic. The only places open at that time were supermarkets, tianguis (street markets that sell vegetables, fruit and home-cooked meals) and essential places like pharmacies. All bars, clubs, cantinas, museums, businesses were closed, with restaurants only permitted to do home delivery and take out.

One of the largest cities in the world was like a ghost town.

But things have opened up some since mid-July.

The Mexican government has introduced a stoplight system to inform the public the levels of possible COVID contamination using four colors: Green, very low risk; Yellow, medium risk; Orange, high risk; Red, maximum risk. Mexico City has been at the orange level since the beginning and continues in the orange. We’ve never been in the red overall, although some neighborhoods are marked as red. In those neighborhoods, the local government has hung banners warning the residents to be extra careful.

The southern border is still closed to automobile traffic except for essential travel, whatever that means.
All the airports in major international cities across Mexico are open to visitors coming in from the U.S., with no requirement to be tested for COVID-19, or to get prior approval before entry. But if someone does get off the plane looking sick, possibly showing symptoms for COVID, they will be isolated and quarantined.

Local businesses are now open with restrictions for customers entering the establishments. One must wear a face mask to enter. Walmart, in fact, has a security guard enforcing this rule. Temperatures are checked before entry and hand sanitizer provided. Compliance with the face mask rule in public is very high here; no one is fighting the regulations or having a tantrum over having to wear a face mask, like we’ve seen in some places in the U.S.

All weekend neighborhood street markets and bazaars are open. Department stores are open at 30 percent capacity as are the shopping malls. So there is plenty of shopping available for those visiting Mexico City.

What if you want art and culture, and don’t care about shopping? All the museums are now open, too, with mandates requiring masks and keeping a safe distance from others.

The food scene in Mexico City is one of the most exhilarating on the planet; some people come here just to eat.

Though food vendors are safe in preparing their food, be careful when adding condiments to your tacos: There is usually only one spoon per bowl to use in adding your hot sauce, guacamole or onions. So use a napkin to handle the spoon. After all, it’s the little things one does for prevention of COVID that can make a difference.

Even if you are not into Mexican food, the foodie scene here is outstanding. There are restaurants offering foods from all over the world here: Italian, French, Indian, Japanese, Korean and Chinese. There are even Korean and Chinese neighborhoods with their own supermarkets here in the city, so you can really get full authentic Asian flavors.

All restaurants can now open for dine-in services at 30 percent capacity instead of being limited to just home delivery and take out. I personally do not go into a restaurant or café unless they have outdoor seating or if the place is open with all the windows open. If there is no outdoor seating, I opt to sit by an open window because ventilation is most important. The CDC says that respiratory droplets cause infection when they are inhaled or deposited on mucous membranes, such as those that line the inside of the nose and mouth. So it is important to keep good ventilation in mind in preventing COVID.

Hotels are now open, too, but limited also limited to 30 percent capacity. Some people are using Airbnb so they can stay in their favorite neighborhoods.

Rafael Cruz Báez, a local “nocturnal personality” in the LGBTQ community, says that traveling to Mexico is safe if one follows the rules: Wear your face mask; use hand sanitizer, and wash your hands frequently. Cruz said that the bars now open identify as “restaurant/bars.” Bars can also open with limited capacity and only from 5-11 p.m.

They don’t have to offer a full menu, but the places I checked served nachos, hotdogs and hamburgers, and some are serving enchiladas.

Some of the bigger dance gay bars have remained closed since they are not serving food, and it would be difficult to keep people at a safe distance on the dance floor.

Walking down La Zona Rosa’s “gay street,” Amberes, is always an adventure; you’ll see some over the top outfits for sure. Amberes was Mexico City’s first street to have exclusively gay bars — think Cedar Springs Road in Oak Lawn.

While walking in La Zona Rosa — “the Pink Zone” — I noted lots of people in bars and on the street — but nothing like it was before the pandemic. I saw a couple of bars that were almost empty while some had a large number of customers, with people not social distancing and not wearing masks. It is hard to wear a mask when you are drinking, and it’s not easy to socially distance when you have to lean over to be heard above the loud music.

Everyone appeared to be having a good time though.

Some bars put tables on the sidewalk for people to drink and eat, though I noted very little eating going on. I have never had dinner in a gay bar, so I don’t find this behavior too troubling. Keeping the bar open, in compliance with local rules, is the objective.

Alaska, who identifies as Latinx and non-binary, is owner of Ultra Glam Salon in Old East Dallas. She has already been to Mexico City three times since the start of the pandemic. She said that the first time she flew in March, she was a little concerned and apprehensive about traveling in a plane. But “Mexico is so beautiful,” she said, she just had to go. While on the plane, she wears a face mask, eye protection and long sleeves. She also carries a small bottle of hand gel and a package of moist towelettes to clean the seat and her immediate area. Once she arrives in Mexico City she showers and changes her cloths before greeting her partner, Mexican citizen Juan Carlos Loza.

Then Alaska goes out for exotic Mexican cuisine and to shop at the lively, one-of-a-kind tianguis, or street markets. Why not? After all, the exchange rate is 22 pesos to one U. S. dollar, so your money goes a very long way. Considering the exchange rate at the moment, there is value in visiting Mexico City while prices are also low.

Alaska says she feels safe in Mexico City, because she sees most of the people here wearing face masks — more, actually, than in Dallas.

“Wearing a mask is a little sacrifice that is good for us, and helps stop the spread of COVID” Alaska says, adding that if people follow the rules set by the Mexican government, they will be fine.
Alaska also says that the best part of being in Mexico City is that she not only feels safe visiting during a pandemic, more importantly, she feels most welcome as a part of the LGBTQ community where the Mexico City residents are so very accepting, and she doesn’t feel threatened at all.

Jesus Chairez is formerly from Dallas now living in Mexico City. He was the producer and host of North Texas first bilingual LGBT Latino radio show, Sin Fronteras on KNON 89.3 FM; from July 1993 to July 2005. Chairez’s work is a published in the book, “Queer Brown Voices,” a collective of Personal Narratives of Latina/o Activism. Chairez is a México City based freelance writer and can be reached at: facebook.com/JesusChairez.