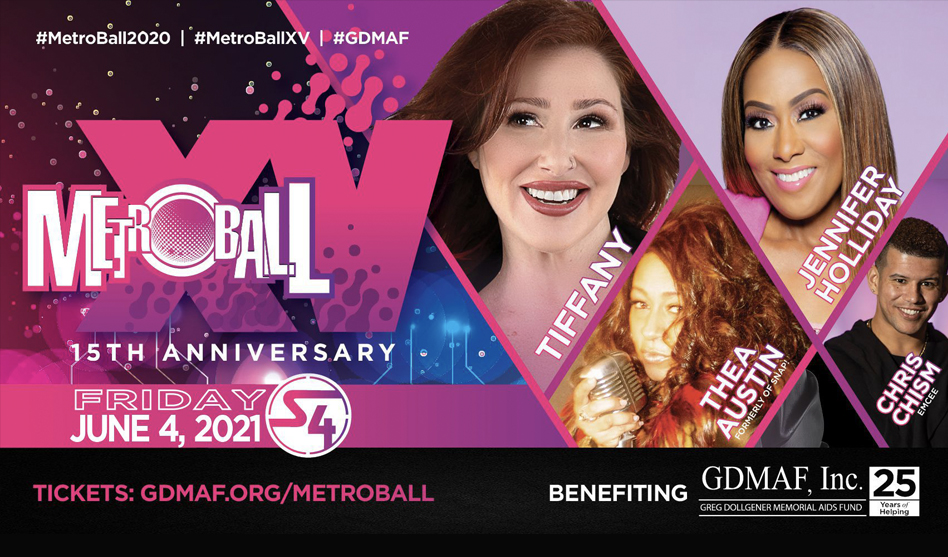 The Greg Dollgener Memorial AIDS Fund’s MetroBall 2020, the 15th anniversary of the fundraising party, was initially postponed from the first weekend in June to Sept. 11 because of the COVID-19 epidemic. As the epidemic has continued to linger, GDMAF officials announced today (Tuesday, Aug. 4) that the party is being cancelled for this year, and reset for next June.

MetroBall XV will be held Friday, June 4, at S4, and organizers said all the entertainers set to perform at the party this year have been confirmed for the event next year, including Tiffany, Jennifer Holliday, Thea Austin and Chris Chism.

Noting that having “started as a small house party” intended to raise funds for GDMAF and its beneficiary organizations. the GDMAF board said in the announcement that the party has “evolved into a premier event featuring a combination of great throwback artists and up-and-coming entertainers.”

The announcement continued, “As COVID-19 became a part of our reality in March, we had hoped it would pass quickly and we would still be able to celebrate with you in June [2020]. However, time passed, and things only got worse, so we postponed until September.

“Unfortunately, with COVID cases at record numbers and event restrictions in place for the foreseeable future, we have no choice but to cancel MetroBall for 2020,” the board members said in the emailed statement. “It was a difficult decision, as money raised is used to help so many people. But we must put the safety or our attendees, volunteers, performers and the venue staff first.”

Board members said they are discussing options with event sponsors. Anyone who has already purchased a ticket for this year’s event can either roll those tickets over to next year or request a refund by contacting contact David Hearn via email at planobar@aol.com. Those who want to donate the cost of the ticket they have already paid for need take no action.