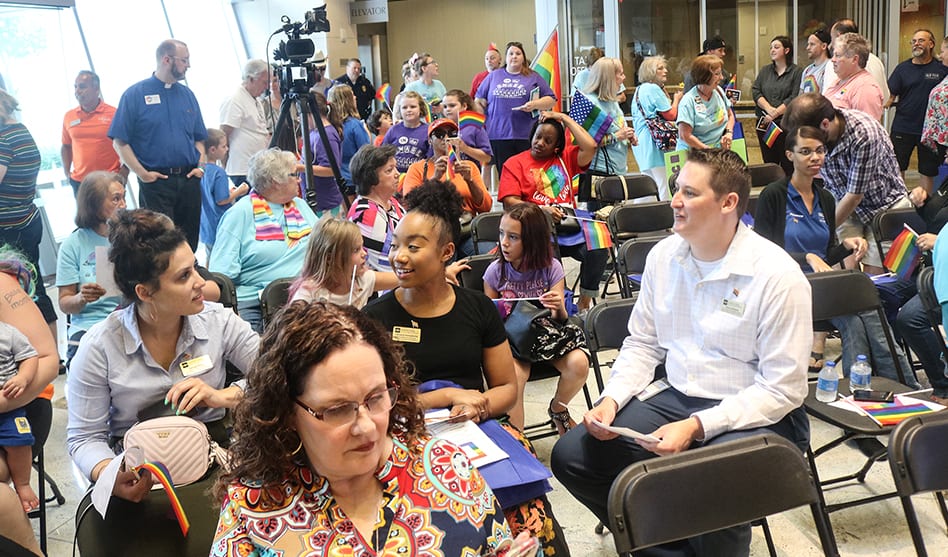 Rainbow and transgender flags filled the lobby of Mesquite City Hall for a first-ever Mesquite Pride celebration on Friday, June 21. And parking was at a premium as a crowd filled the lobby and balcony areas of the city hall as city, county and state officials participated in the celebration.

Police considered online threats made against the event serious enough to assign a large number of officers, but those officers appeared to be just enjoying the gathering at the city hall, which shares a building with Mesquite police headquarters. 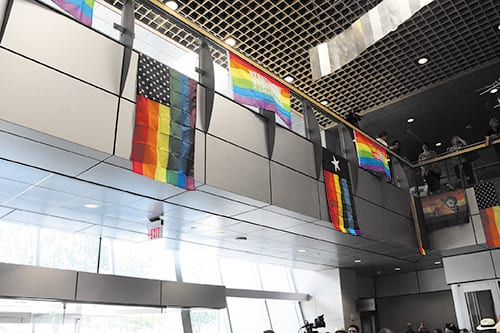 In his welcoming remarks, Casper mentioned that progress was incremental. While some steps are small, this was a giant coming out leap for Mesquite, a city often thought of as redneck by outsiders.

That may be because of the city’s most famous attraction, the Mesquite Championship Rodeo, which opened in 1946 and is held each year in the Mesquite Arena. But even the rodeo arena has hosted the Texas Gay Rodeo Association’s annual Texas Traditions rodeo event.

People who had attended Pride at Dallas City Hall a few weeks earlier marveled at the lobby in Mesquite, which was decorated with an array of rainbow and transgender flags flying from the balcony and rainbows of balloons festooning the lobby.

Resource Center’s Rafael McDonnell joked that Dallas was going to have to up its game to match Mesquite’s effort.

“I’m the essence of a Mesquite kid,” Key said in her welcome speech as she outed herself to the crowd. “I’m a proud member of the LGBT family … and now the whole town knows.”

“I feel safer,” Key said of the event’s impact.

Alan Ross Texas Freedom Parade earlier this month. For some of them, he said, it was the first time in their lives they felt like they belonged. 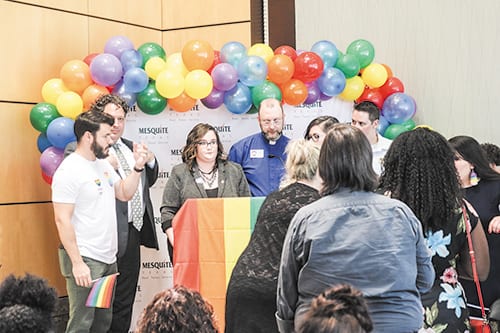 “That,” he added, “is the importance of Pride.”

Phillip Clark, the new LGBTQ+ community liaison for District Attorney John Creuzot, spoke at the event about efforts the D.A. is making to make sure all people are being treated equally.

“Everything I support must look like Dallas County,” Daniel said, describing her district and the county as a diverse and including a large LGBT community.

She said Dallas County has the right policies in place, and her job is to make sure laws are enforced and the behaviors match the policies. She used as an example Marriage Equality Day, the day the U.S. Supreme Court’s decision declaring same-sex marriages to be legal nationwide went into effect.

“Dallas County showed support and leadership,” Daniel said. Many couples came to Dallas County to get their marriage licenses and get married by Dallas County judges, because they knew they’d be welcomed here.

Leslie Garza from the office of state Rep Victoria Neave, whose office covers a large portion of Mesquite, delivered a proclamation from the state recognizing Pride in Mesquite.

As polished as the event was, the only thing surprising about it was that it was a first for the city.