McCrory and his lies about North Carolina’s ‘bathroom bill’ 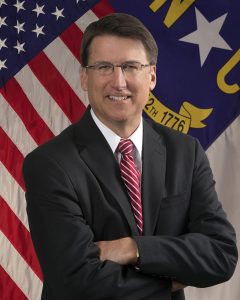 North Carolina Gov. Pat McCrory in March signed into law a bill that not only rolls back an equal rights ordinance recently passed in Charlotte to protect LGBT from discrimination and prohibits such local ordinances from being passed in the future, but also prohibits transgender men and women from using the appropriate public restrooms. Since then, individuals, businesses and others — like Broadway composer Stephen Schwartz — have been standing up in droves to denounce McCrory and the legislation, and announce their intentions to boycott the state.
Last week, McCrory told the press that the bill doesn’t take anyone’s rights away and that all the hoopla was created by the media and political correctness run amok. I already called him out for being a Mr. Lying Liarpants on that. Now here’s a video offering some proof that he’s lying.