Marriage in the time of COVID 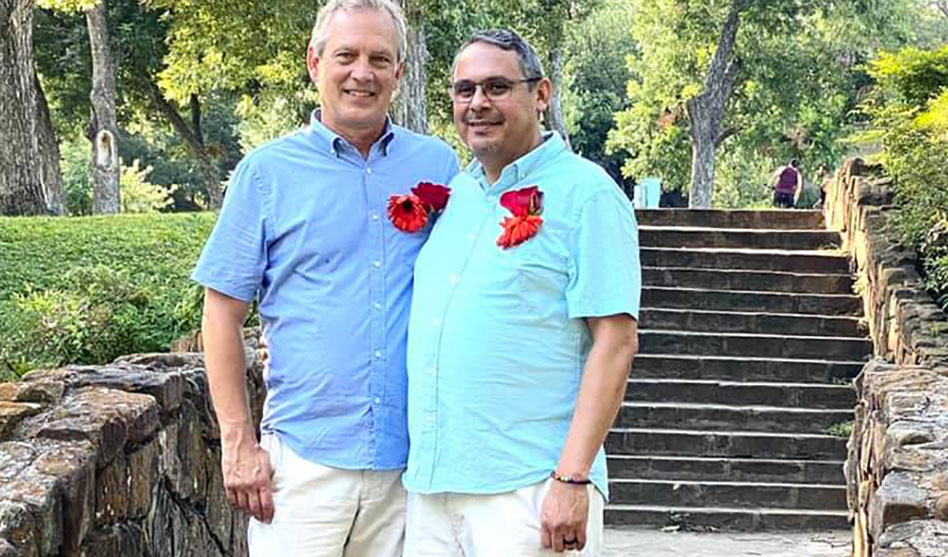 Some are opting for small weddings; others are waiting until it’s over

Terry Walker married Santos Casiano in a ceremony at Reverchon Park on July 18, despite the pandemic. Although Walker describes himself as “spiritual” and his husband as Buddhist, the Rev. Tim Shaefer of Royal Land Baptist Church officiated. About 12 people, including their photographer and videographer, attended.

The couple met in 2001 when they were both caseworkers at AIDS Arms. Walker left the agency for a while, returning in 2012 as marketing and development and event coordinator for what is now Prism Health. He and Casiano had lost touch, but they reconnected and began dating.

In May 2019, the two became engaged while on a trip to New York. They set the date for their wedding, and on March 1, they sent out “hold the date” cards. By then, they had paid a deposit on 3015 Trinity Groves for the reception.

By the end of May, the couple sent out an update: The reception would be held “once we can all gather,” maybe in January or February next year. 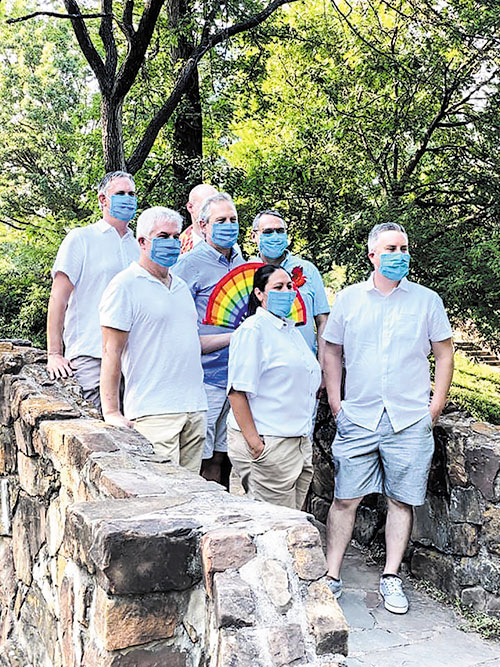 But the pandemic was certainly on their mind, and being “of a certain age,” as Walker put it, the couple wanted to be married sooner rather than later. They wanted the recognition that came with legal marriage. Walker didn’t want to have to call Santos his “partner” — business partner? — and he didn’t want to call him his boyfriend: “We’re not 18,” Walker said.
Walker wanted to be able to just call Casiano his husband. And he wanted them to be legally married, in case something happened health-wise.

So they asked Shaefer, whose husband works at Prism Health, to perform the wedding. They thought about several outdoor locations where they could safely hold the wedding; Turtle Creek Park was their first choice, but Reverchon Park provided more privacy and shade. They ordered a cake. They ordered matching masks for the entire wedding party.

And they held a wedding.

With their reception in mind, they asked filmmaker Robert Camina (The Raid of the Rainbow Lounge, Upstairs Inferno) to record the ceremony. Walker said they’ll play the video at their reception. They celebrated with some curbside cake service that evening but were too tired to even open the bottle of champagne that night.

Walker said he’s worked with the owner of 3015 before, and that she’s a good friend. She hasn’t asked for an additional deposit and is applying what he already paid to a winter reception. They’re planning something casual like barbecue and are looking forward to their two families meeting.

Planning a COVID wedding
The Rev. Neil Thomas, senior pastor at Cathedral of Hope, said the weddings he and his staff have officiated at since the beginning of the pandemic have all been held off-site, and all in front of a small group.

One couple that initially postponed their wedding decided to hold their ceremony after postponing caused stress in their relationship.

Those who’ve proceeded with their — scaled back — wedding plans have done so with a sense of protecting themselves.

After all, there is a plank in the GOP platform that calls for reversing same-sex marriage laws, Thomas said. And we all remember the days when family members could come in after someone had died and take everything a couple had worked to build because their relationship wasn’t legal.

And during this time of pandemic, many have in their minds the notion of taking care of each other if either were to get sick with the COVID-19 virus. 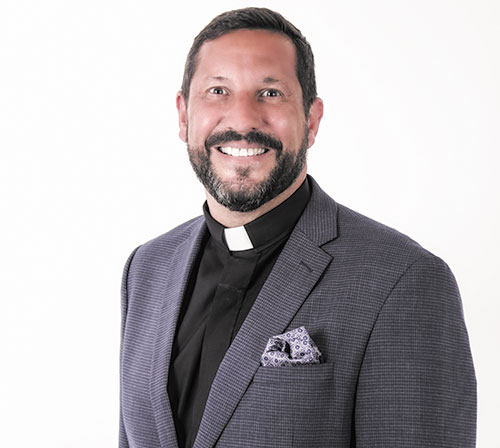 Normally, Thomas and his staff officiate at 100 or more weddings a year. This year, that number is way down. Since the beginning of the pandemic, he said, they’ve done maybe 15 or 20.

But even if those weddings during the pandemic usually have to be scaled way back from original times, that may not necessarily be a bad thing. After all, Thomas said choosing the 10 most important people in your life to celebrate with you at a more intimate wedding may make the event even more meaningful.

“It’s all about state of mind,” Thomas said. “For some, it’s better to go ahead and do something safely and know you are married.”

Small but fabulous
Joche Westmoreland, owner of Joche W. Events, said his business has continued doing all sorts of events, with some trying to maintain their original guest count and others choosing downsized weddings. Others, on the other hand, have chosen to postpone their events until well into next year.

“Some of our small events have always been some of my favorites,” he said.

So when a couple has decided to do a wedding with just 10 people, Westmoreland encourages them to go over the top with floral design, add to the décor with backdrops, choose a breathtaking location and serve a magnificent meal.

For locations during the pandemic, Westmoreland said, he has staged weddings at the Fort Worth Botanical Garden, on the rooftop of the Statler Hotel and at Lake Grapevine. Rugs and antique furniture added to the ambiance of the lakeside wedding, and over-the-top arches added to the elegance of the rooftop event.

For the wedding held at the botanical gardens, Westmoreland said he added to the floral theme with a fabulous pair of floral arrangements framing the couple.

If you’re scaling down the number of people that can attend, he suggested, upgrade the meal you’ll be serving. “Add a couple of courses,” he said. And serve your dozen guests the finest meal a caterer offers, he added That will still be less than the cost of serving your original 250 guests.

For the seated meal at a large outdoor venue, rather than have two tables of 10, seat your guests at four tables of five, Westmoreland said. That will make it feel like a larger event.

Of course, Westmoreland continued, he doesn’t mind any of his clients postponing until after the pandemic is over. He’s finding that couples who wait often plan even larger weddings. They’ve had more time to save and, after spending so much time staying home, are rewarding themselves and their guests with an even larger party.

In the final summation, Westmoreland said, his best advice is: Do what’s best for you. If getting married during the pandemic feels right, have a beautiful event with the most important people in your life. If sharing the joy of your wedding is what’s most important, wait until it’s safe.

And if you want to be married now for reasons that may include the practical, like getting on your spouse’s health insurance during these uncertain times of pandemic, have a private ceremony now and hold your larger celebration later.

Weddings outside the box

Think out of the box for a beautiful wedding during the pandemic. The guest list may be short, but that increases the possibilities. Just remember, many facilities may have limited catering during the pandemic.
• A private room in a steakhouse
Some beautiful rooms exist that will fit your small party with plenty of room to socially distance but couldn’t accommodate a larger crowd.

• Lakeside
The water tends to photograph well. If the ceremony will be held at sunset, pick a spot along the east side so the sun will set in the background. Beaches always make a beautiful wedding location.

• Rooftop terraces
Hotels like the Joule or the Canvas (formerly the NYLO) have beautiful rooftops with fabulous views that can accommodate small to medium-sized parties. Some residential buildings like the Mosaic have great rooftops as well.

• Private room in a hotel
The Adolphus has some beautifully luxurious rooms that accommodate a small party but couldn’t be considered for a large event. For a more contemporary upscale event, try the Hotel Crescent Court or a small hotel like the Hotel St. Germain.

• A park or garden
The Arboretum along White Rock Lake or Turtle Creek Park are beautiful settings for small weddings.