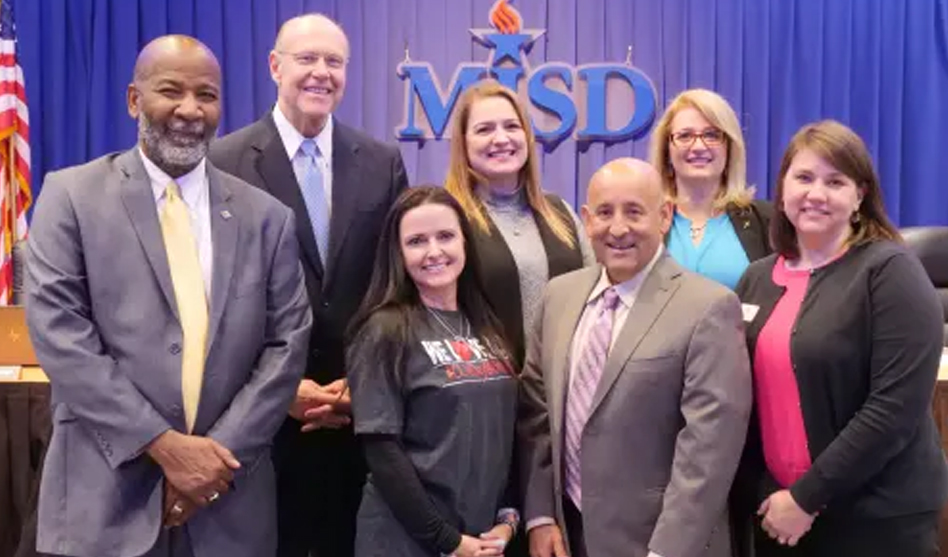 The Mansfield ISD Board of Trustees

Mansfield ISD will meet tonight to introduce its new diversity and inclusion officer and to introduce a new policy that discriminates against its LGBTQ employees.

In July, the U.S. Supreme Court issued its Bostock v. Clayton County ruling that said that, in employment, sexual orientation and gender identity are covered under the category of sexual discrimination.

The state of Texas issued new wording that has been widely adopted by ISDs around the state. The section on discrimination reads:

Discrimination against an employee is defined as conduct directed at an employee on the basis of race, color, religion, sex, national origin, age, disability or any other basis prohibited by law, that adversely affects the employee’s employment.

According to Resource Center’s Rafael McDonnell, before the Bostock ruling, only two of the 110 school districts in the Dallas/Fort Worth area had employment nondiscrimination policies that specifically included their LGBTQ employees — Dallas ISD and Fort Worth ISD. Since Bostock, 93 ISDs in the eight-county area have adopted this new wording to be in compliance. One voted against adopting the ruling and reworded it without LGBTQ protections — Highland Park ISD in Dallas County.

But Mansfield ISD has adopted the state’s wording but omitted the second sentence that specifically protects LGBTQ employees from discrimination. The Rev. Katie Hays of Galileo Church in Mansfield said, “They’re determined to be on the wrong side of history.”

Mansfield ISD lost a lawsuit last year after removing teacher Stacy Bailey from her position when she did what every Mansfield teacher does on the first day of school — show pictures of her family, including a picture of her wife. So Mansfield has already lost a discrimination lawsuit based on sexual orientation — and that was before the Bostock ruling — and yet seems to be inviting more litigation.

Tonight’s board meeting will offer only a first reading of the new policy. That means the district’s new inclusion and diversity officer has time before the second reading and adoption of the policy to change it.

McDonnell said, “Their legal representation is bordering on malpractice.”

Of the 16 other school districts in the area that have not adopted the new wording, McDonnell said with COVID and remote meetings, some just haven’t gotten to it. But, he pointed out, every ISD in conservative Wise County now has a written LGBTQ nondiscrimination policy. And Mansfield is surrounded by equality — Grand Prairie, Arlington, Midlothian and Kennedale all have adopted the new nondiscrimination policy.