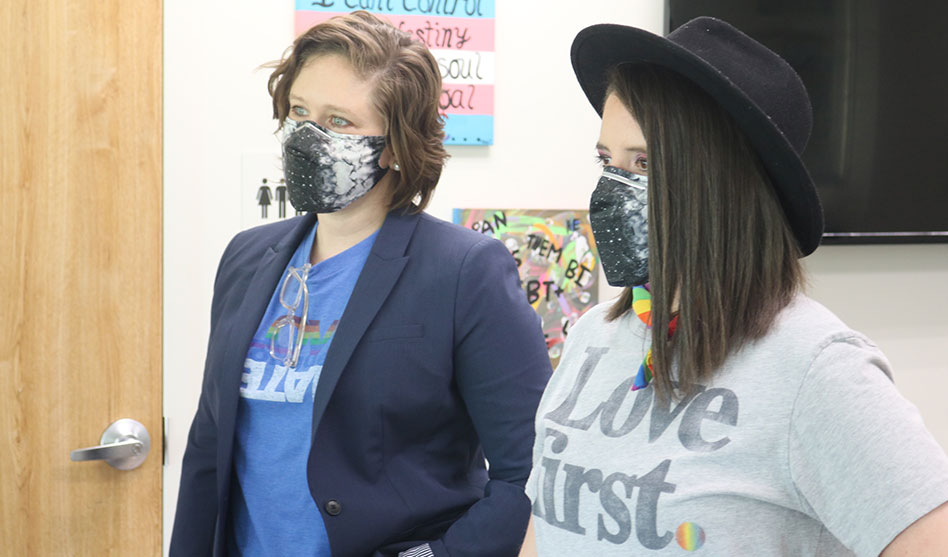 The school district voted not to include gender identity and sexual orientation in its nondiscrimination policies, despite SCOTUS’ ‘Bostock’ decision

One week after the U.S. Supreme Court ruled that “sex” includes sexual orientation and gender identity protections under Title VII of the Civil Rights Act, Mansfield ISD’s school board voted unanimously on Tuesday night, June 23, not to expand its nondiscrimination employment policy to include those two categories.

Stacy Bailey, a Mansfield ISD elementary school art teacher who had been lauded as teacher of the year, filed suit against the district in 2018 after she was removed from her classroom in late 2017 because she mentioned her fiance — now wife — Julie Vazquez to her students. She was suspended with pay for an investigation she was told might take a couple of weeks but instead lasted a full school year.

In February this year, Bailey won her suit, and she negotiated a settlement that required, among other things, that the MISD school board vote on whether to include gender identity and sexual orientation in the district’s nondiscrimination policy. Bailey said the agreement didn’t actually require the school board to pass it, just to vote on it.

The board has delayed that vote since reaching the settlement in February. Board members claimed they were waiting for guidance from the U.S. Supreme Court, which was expected to issue its ruling on three employment discrimination cases that had been consolidated under Bostock v. Clayton County.

What was even more surprising than the board completely ignoring the Bostock ruling was the unanimous vote. Mansfield School Board member Randall Canedy, for example, has spoken about his gay son and the son’s husband. Yet Canedy voted against LGBTQ employment protections and protection for LGBTQ students.

And board member Raul Gonzalez spoke with Resource Center’s Rafael McDonell and Leslie McMurray on at least three occasions about model policies, according to McDonell, even telling them on one occasion,

“We’re going to get this done.”

Not only did Gonzalez not get it done, he voted against nondiscrimination himself. “He failed,” McDonnell said of Gonzalez after the vote.

The Rev. Katie Hays from Galileo Church in Kennedale had been involved in equality activism in Mansfield ISD since Bailey was first suspended from her position. Hays said the way this case was handled and the way the vote was taken was typical of how things happen in Mansfield: Everything is done behind closed doors, she said, then, without public discussion, a unanimous vote is taken. Hays said she has seen the same thing happen at just about every school board meeting for the past two-and-a-half years.

Tuesday’s vote, Hays added, “sends such a sad message to the students.”

Over the past few years, a variety of LGBTQ students and their parents have come before the school board to speak about Bailey’s case and the district’s lack of protection for LGBTQ students. Hays said she has “listened to heartache from parents and students,” adding that the board should “Just enumerate the protections to these vulnerable kids.”

Hays called Tuesday’s vote “psychological cruelty” and said it was both sad and mean. The message sent, she said, is, “You’re not protected here.”

On Monday, the Texas legislative LGBT Caucus, made up of five LGBT members of the Texas House of Representatives and more than 20 allies, sent a letter to the Texas Association of School Boards. Their request was that the organization expedite a revised discrimination, harassment and retaliation employment policy in Texas public schools as a result of last week’s the Bostock ruling.

“Based on the ruling from the court, this revised policy should contain language that sexual orientation and gender identity are protected from discrimination in the workplace,” the caucus wrote in its letter.

Caucus members reminded the association that hiring for the fall school year was about to begin, and only a handful of Texas school districts already have inclusive language in their policies. Among those that do are Dallas ISD and Fort Worth ISD.

Texas Associations of School Boards responded to the letter on Tuesday, notifying LGBT Caucus that it had already updated with its recommended changes in light of Bostock.

Mansfield school board members ignored that information when it took its vote that evening.

Bailey said she was disheartened by the vote: “This is an opportunity for the superintendent to speak out for equality for all. Will employees be protected and supported?”

She said what disappointed her more than anything is that the policy the school board voted against included protections for LGBTQ students and their families. She said when she was first suspended, she saw one lesbian mom in her neighborhood post online that she didn’t feel comfortable enrolling her child in that Mansfield school after reading about how one of her school’s teachers was being treated.

“We are protected by the Supreme Court ruling,” she said, but some gay teachers she works with told her the school board’s vote was a “gut punch.”

McDonnell, communications and advocacy manager for Resource Center, has focused a lot of his advocacy efforts on getting policies and procedures at North Texas schools updated to provide specific protections for LGBTQ students, faculty and staff. He said the Mansfield school board’s vote this week was “a failure of leadership from every member of that school board and from that superintendent. They should be ashamed of themselves.”

Dallas ISD moves forward
But while he was disappointed by the vote Tuesday in Mansfield, McDonnell said there is good news coming out of the Dallas ISD. School board members there were expected to approve policy changes there to make the district’s dress code “more LGBTQ inclusive” and to lift discriminatory restrictions on black students wearing natural hair styles.

The expected changes will culminate “nearly a year’s worth of work” with DISD that started last year when the Austin ISD changed its dress code with LGBTQ students in mind. “As a result of that, we took a look at the DISD dress code policies, and then took that to members of Youth First for input and suggestions. We came up with two different things,” McDonnell said. “One was that students will not be unfairly penalized or singled out for dress code violations for a variety of reasons,” including dressing in ways that don’t conform to traditional gender stereotypes.

In addition, proposed changes include language dealing with what happens if a student comes to school and is deemed to be “out of policy.” The schools already have a supply of clothes to help students in those situations who cannot, for whatever reason, just go home and change into something appropriate. The new wording would make sure that students in that situation can get clothing that matches their gender identity and expression, McDonnell explained.

In addition DISD Trustee Ben Mackey is expected to offer an amendment to end discrimination against black students wearing natural hair styles. This comes as the Black Caucus in the Texas Legislature prepares to introduce a bill in the next legislative session that would ban such discrimination statewide.

McDonnell said the proposed dress code changes were part of the board’s consent agenda for Thursday night’s meeting and so were expected to pass without problem. “But,” he added, “I wouldn’t be surprised to see them pull it from the consent agenda for a separate vote, just to give board members a chance to be on the record with their vote.”