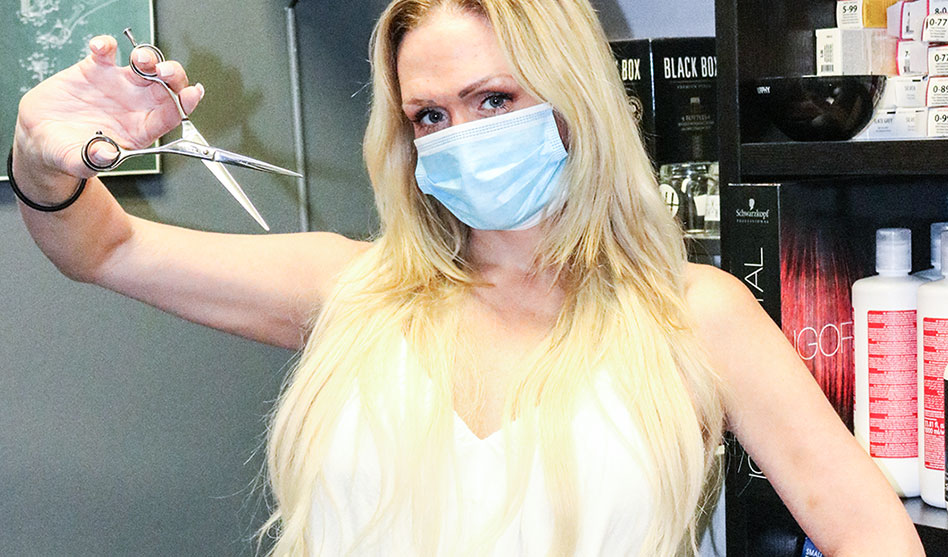 Krystal Summers returns as a (barber) pole worker with a new salon… and a lot of trepidation. (Photography by Arnold Wayne Jones)

On a rainy Tuesday morning a few weeks ago, deep in a warren of office suites in a Lakewood strip mall, Krystal Summers did something that just two months ago seemed almost impossible. And it terrified her… in several ways.
First was the trepidation that comes with becoming a small-business owner. And then there was the prospect of doing so in the midst of a pandemic.

As Summers hung out her shingle for her new salon, Krystal Paints Dallas — a huge step she had long dreamed of — she was simultaneously gripped by the concerns that come with intimate contact with clients during the season of corona.
Summers had been a vocal critic on her social media of Shelley Luther, the smugly brazen scofflaw who defiantally opened her salon in contravention of a statewide shutdown, was then punished and subsequently became a hero of the far right, ultimately having her jail sentence overturned by gubernatorial fiat. She felt Luther — and subsequently state leaders — were behaving rashly, opening up salons sooner than was safe. And she still feels that way.

“I think it’s too soon,” Summers declares, fully masked within her studio at Village Salons on Gaston Avenue. “But I felt forced to come back to work because I couldn’t afford to lose clients — the biggest part of the job is developing and holding on to a client base.”

That’s what she’s spent the last seven years doing, until recently at Vertigo 12, the downtown salon owned by her friend and (former) employer Nolan Matthew. But her goal has always been to be her own boss.

“It was always my intention to go out on my own,” Summers says. “I’ve thought about it for years. I had actually visited [the Village Salons space] a while back. But my loyalty to Vertigo… it was hard to let go.”

COVID-19 did a lot of the decision-making for her, as it turned out. State and local governments closed barbershops and the like in March. And while she had clients who begged her to come to their homes and cut their hair during the interim, she steadfastly refused.

“I told them I’m not doing that,” she says, noting that she has taken the self-isolation protocols extremely seriously, having virtually no contact with anyone other than her live-in boyfriend and the occasional cashier for months. And if she had her way, she’d still be practicing shelter-in-place. But once Matthew announced that Vertigo would not be reopening, it lit a fire under Summers to forge her own path — a forced entrepreneurship that she sees, in the final analysis, as a unique opportunity. She’s contacted about three-fourths of her existing clients, and virtually all have said they will follow her.

The return to business-and-new-normal has its own risks, which do concern her. “We have to touch people,” she notes; when cutting her first customer’s hair, just moments before we meet, she realized that her clients will always have to remove their masks even briefly for her to do her job properly.

“I’m very excited about the new venture,” she says, though it did end up happening too fast. Gov. Abbott had initially indicated salons could reopen on May 18; he suddenly caved to pressure from Luther and her ilk, and allowed them back on May 8, forcing Summers to ramp up her model by more than a week. And it all manifested itself with the realization that the boss is responsible for everything — supplies, rent, customer retention, scheduling and every other detail. And considering her secondary job as a drag queen on The Strip is also indefinitely on hold, she is glad to have an income again. Still, she found the imposed moratorium a blessing in disguise.

“I’ve honestly enjoyed the break,” she says. “I’m a workaholic — I sometimes work 16 hour days on weekends [between styling and performing].”

Only now, when she works, it’s all for herself — a bright light amidst the gloomy shadow of this corona.