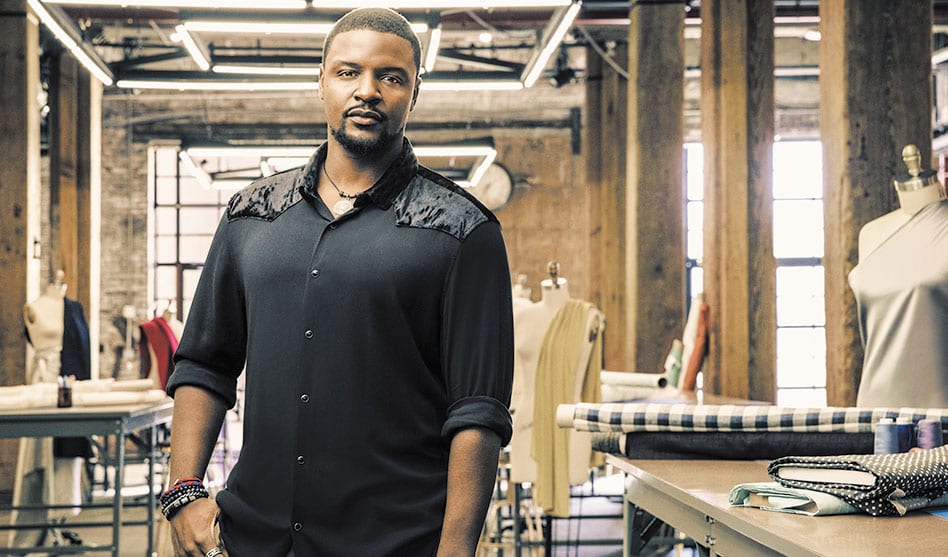 Look for Venny Etienne at the House of DIFFA this year… though you can see him a few days earlier when be debuts on Bravo as one of the contestants on the new season of ‘Project Runway.

DIFFA, the design-centric fundraiser and social lodestar of gay Dallas, is only a few weeks away, and Venny Etienne is still fussing over the garment he plans to donate for the auction. The placket has not been attached, and he’s debating over what to do with the collar. He currently has a black faux-ostrich band but is considering chucking it for a simple strap of blue denim to match the rest of the piece.

The process of creating fashion can be a slow one for Etienne. He likes to multitask in his workroom — listening to music, sipping on a cabernet, checking in on social media and, eventually, making a decision and sewing something. Those were all luxuries he could not indulge, though, when he was cast in the upcoming season — the 17th — of Project Runway.

Etienne is certainly not the only Project Runway alum to donate to DIFFA, or even the first local one, but he may be the first who is on the cusp of reality TV fame while working on his jacket. The garment he’s donating to DIFFA this year won’t be his first; he’s an old hand at this. (See sidebar, CARSON AND DANA AND LUCY, OH MY!, for details about this year’s DIFFA gala.) Since graduating from Wade College’s school of fashion design in 2015, he has built his brand (his label is called LeVenity) across North Texas, producing a steady stream of ready-to-wear women’s sportswear but also seasonal collections and custom work. But, because we live in the era we do, it’s not always enough to be talented; you also need to be on TV. (Is there any drag queen who hasn’t sent in an audition tape to RuPaul’s Drag Race or any line cook who hasn’t dreamed of being named Top Chef?)

Until last year, though, it wasn’t something Etienne had pursued. In fact, he had substantial misgivings about putting himself on display so early in his career.

“There’s always a flip-of-a-coin to it, because you’re putting yourself out there,” Etienne says. “[Some designers] may find it as a benefit [to their brand], others may find it as a disadvantage. I had always been hesitant because I didn’t feel I was ready. And then there was the time restraint [to finish a challenge]. But people who have seen my journey have been pushing me to apply. They said, ‘Just don’t be the bitch.’”

He finally took the plunge last year, during a period of relative tumult for the venerable show, which has aired since 2004. First was the news that — after originating on the Bravo channel before migrating to Lifetime in 2010 — it would be returning for its 17th season to Bravo. Next was the shocking news that two of the stalwarts who had been with the show since the beginning — Emmy-winning host/mentor Heidi Klum and Tim Gunn — were leaving to start a new series for Amazon Prime. Who knew what rules were being thrown out and how different the show would be?

Nevertheless, Etienne applied when the casting call went out. And while there were some minor tweaks to the show (he’s hush-hush on the details before the season premiere on March 14), he says the experience went pretty much as he expected… although he concedes you can never really prepare for the reality of reality TV. 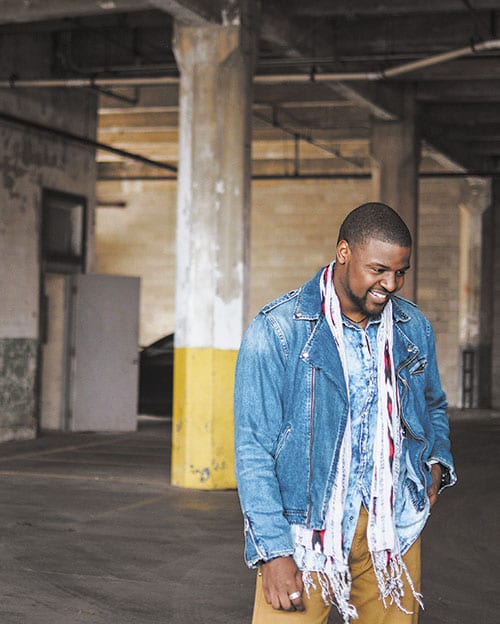 “I’ve seen other shows, and I kind of expected that it’s not just a design show — it’s still a production” — that is, they are making entertainment television. “So I’m theirs for however long they need me. But it’s really hard!” he says. “Even right now, as I’m doing flyers [promoting a watch party], I’m asking friends, ‘What do you think of that font?’ So going on the show means I’m putting myself in front of fashion oracles who know a lot — [longtime judge] Nina [Garcia] is there, Brendan Maxwell, [Season 4 winner and new mentor] Christian Siriano. But my main focus was putting my best foot forward.”

That meant, more than anything, understanding his own strengths.

“I do sportswear, basically separates — pants, dresses, jackets — but I like edgy and sophisticated silhouettes… trendy and sporty at the same time. [And when it comes to the judging], it’s more about them having to decide who you are as a designer; as long as they understand who you are as a designer, [that’s how they judge you]. If your work is all about craftsmanship, then you show something frayed, they are wondering who you are. Everything to me was a first experience, but I was really [surprised] by how real and down-to-earth the judges are. I know on the show they look very cutthroat, but I could see the constructive criticism and the love in what they are saying.”

Etienne did have a few advantages over the other contestants, none of whom he knew prior to filming: He had been to Mood — the fabric store where the designers shop for all their materials — and so he knew the layout, the inventory. But that ultimately didn’t make much of a difference.

“I usually spend hours there!” he notes, but was given only 30 minutes to get everything he needed for a challenge.

“And under pressure, anything can happen.”

The pressure, of course, is the life-blood of these kinds of programs; pushing the contestants to the brink is part of the drama.

“It was very exhausting, just the pressure of the challenges. These are one- or two-day challenges, and I don’t normally work on that schedule. They want to push you to the point of disaster, but sometimes the best things come out,” Etienne says.

And, he says, the friendships he forged with the other contestants were real.

“I think this season, in terms of camaraderie, will be just like the same I just saw on All Stars, where one person was helping the other one with a zipper — why not help? I’ve always had that mentality. Let’s put our best foot forward without sabotaging each other… but once the sabotage starts, game on!”

Etienne cannot reveal, of course, how well he did on the show. In terms of highlights, though, he says it was great meeting celebrities (“that’s something I’m not used to”), and was amazed at how tiny Christian Siriano is. But ultimately, he found it to be a positive experience… and one he approaches with open eyes on the prize.

“I don’t wanna be a TV designer,” he says. “I take my business seriously. Although I have received a lot of recognition in Dallas, I want to receive recognition on a broader scale. I’m not looking to be a public figure. I need clients and to make a profit, but I also want to inspire people. A lot of who I am came from the hood. I grew up in the projects and kept persevering. If my story could encourage people to go further, then that’s a personal mission — a good that I hope will come out of this show.”

But for now, he needs to finish that collar.