Love starts on a downbeat 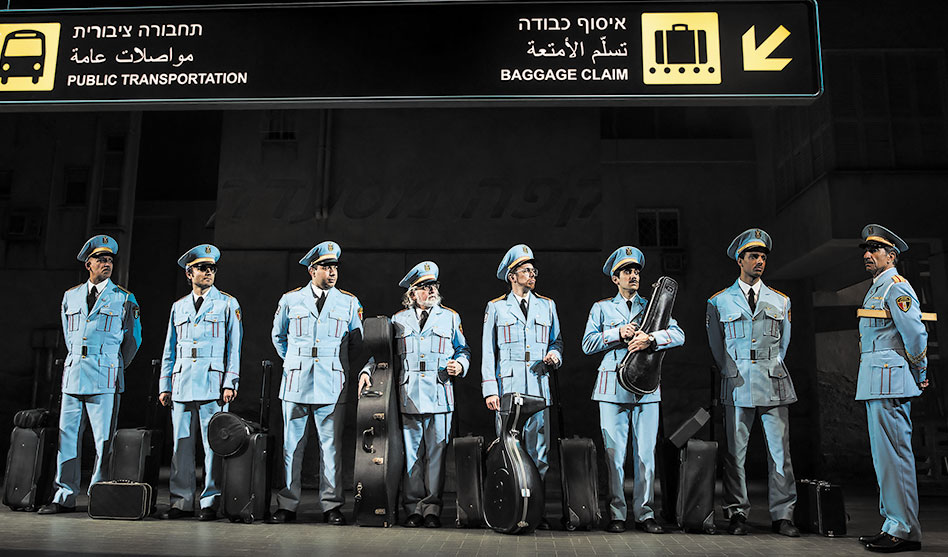 An Egyptian policeman’s ceremonial orchestra is stranded in a small town in Israel to magical results
in ‘The Band’s Visit.’

Heartfelt and low-key, ‘The Band’s Visit’ is a minor miracle of Broadway musicals

The “fish out of water” trope is a familiar one, even in Broadway musicals, and yet the very existence of The Band’s Visit still feels like a minor miracle. The water-less fish here are the members of a ceremonial police orchestra from Alexandria, Egypt — gussied up like a Salvation Army band — who, due to the absence of a “P” sound in Arabic, get bus tickets to the wrong destination and end up in a sleepy Israeli town in the Negev Desert. Despite the cultural clash — buttoned-down Muslim musicians amid uber-caz Jews — the presence of the band enlivens the dull lives of the locals. Hearts are touched. Minds are changed.

But similar musicals, like Priscilla Queen of the Desert, have flashy costumes, lively dancing, ebullient celebration. The Band’s Visit, at the Winspear through Feb. 23 (co-presented by Dallas Summer Musicals and AT&T Performing Arts Center) is a minor-key musical with sounds created from instruments like an oud and goblet drum. It’s a mystical, exotic but not fantastical cultural pearl of a show. And in the age of Hamilton, Webber and the gazillionth Disney adaptation, such restraint is amazing.

The entire show plays out over the course of one evening. Tewfiq (Sasson Gabay), the bandleader, accepts an offer by cafe owner Dina (Janet Dacal) for his musicians to sleep over at her and her friends’ homes. Haled (Joe Joseph), on the eve of an arranged marriage, is just hoping to explore new experiences. And, before you can say “Smiles of a Summer Night,” they all get what they want… or at least, what they need.

No musical in memory is as much about music as a form of communication as The Band’s Visit is. In fact, everything revolves around ideas of connection. The Israelis and Egyptians speak mostly English, because that’s one language they all understand… more or less. But their accents and word choices compel everyone in the audience to lean in. There is never a discussion of politics or religion, of differences. But those themes linger over every moment of the show, demonstrating how, if we pay attention to each other, we can overcome them.

And we do so through a Middle Eastern-tinged score by David Yazbek that’s head and shoulders above anything he has previously produced (including The Full Monty and Dirty Rotten Scoundrels). With unusual time signatures and complex orchestrations, you can practically taste the dust and boredom of the town on songs like “Waiting” and “Welcome to Nowhere;” you feel the longing on “Omar Sharif” and “Answer Me;” the genuine joy of life on “The Beat of Your Heart” and “Haled’s Song About Love.” With just a few predominant motifs, Yazbek conjures magic. (A sample lyric: Floating on a jasmine wind… honey in my ear, spice in my mouth… he was cool to the marrow, the pharaoh of romance). If Fiddler on the Roof were modernized, it might sound something like this.