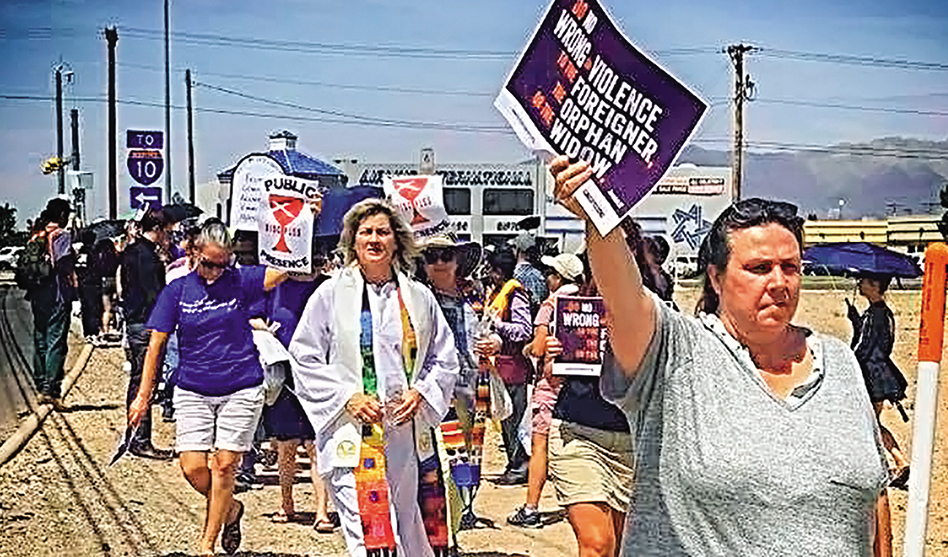 As about 500 clergy marched to the immigrant children’s detention center near El Paso, news spread among marchers of a five-year-old boy inside the facility who tried to hang himself with his own shoelaces, according to Congregation Beth El Binah’s cantor, Don Croll.

Five groups organized the rally. The Rev. William Barber’s group Moral Monday was the principal organizer, and the Border Network for Human Rights and the Poor People’s Campaign were among the others.

Croll was one of the representatives of the Religious Action Center for Reform Judaism participating in the protest. 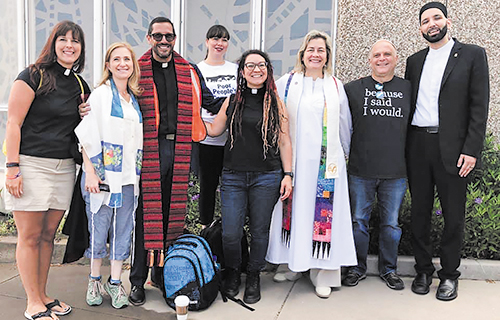 “The same forces caging mothers and fathers and making children drink out of the toilet,” Barber said, are working against LGBT rights, are supporting tax cuts for the wealthy and are using racism to divide the country.

Several faith leaders, including Barber, Union for Reform Judaism President Rabbi Rick Jacobs and Imam Omar Suleiman of Irving, crossed the border to see the dangerous conditions refugees were enduring in Juarez as they wait to enter the U.S. Upon return, only Suleiman was detained. The others waited for him as he was interrogated.

Border patrol agents asked him inane questions like, “Have you heard of ISIS?”

Suleiman is under a fatwa, or death sentence, from ISIS for his peaceful views and his work with other religious groups. So yes, he’s more than heard of them.

Agents asked him repeatedly, “Where are you from?” Normally when people tell him to go back where he came from, Suleiman jokes that although he likes New Orleans, where he was born, he prefers Dallas.

His two-hour detention was no joke, however. But Suleiman, born a U.S. citizen, usually suffers such harassment when he returns to the U.S.

Preparing for Moral Monday and the march of clergy to the ICE Detention Center, Barber sent word to the facility located next to El Paso Airport that clergy have arrived in the city to minister to the children who are being held. They weren’t exactly denied entry, Croll said. Their request to visit the children was simply ignored.

Cathedral of Hope’s senior pastor, the Rev. Neil Cazares-Thomas. made his first trip to El Paso for Moral Monday. He said that although he didn’t see any children, just seeing the facility was horrifying.

“Seeing the size of the place — in the middle of the desert, the heat, the humidity, no shade,” he said. “Children are kept there with no outdoor space.” 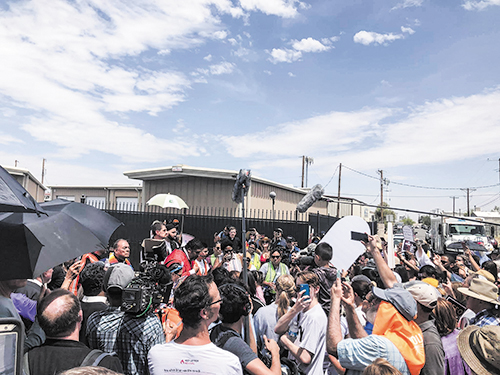 Cazares-Thomas said he couldn’t imagine his 5-year-old daughter being held in such conditions.

“The height of the wall and security that surrounds it,” Cazares-Thomas said, magnified the horror.

The children, he continued, should have been allowed the pastoral care of the 500 clergy standing at the gates. By refusing that, he said, Border Patrol agents were denying the children their constitutional rights.

Clergy of all faiths took part in Moral Monday — and not just those of traditionally more liberal denominations. Evangelical ministers, usually seen as Trump allies, also were present.

What binds different faiths together is a tradition of social justice, Cazares-Thomas said. “Whether it was the Koran, the Talmud or the Christian Bible, ‘Do unto others’ was a tenet that united us,” he said.

Croll was even more specific. He quoted a commandment from Leviticus: “Do not stand idly by while your neighbor bleeds.”

That was one of the reasons, he said, that he needed to be in El Paso this week.

Oak Lawn United Methodist Church’s pastor, the Rev. Rachel Baughman, has made several trips to the border. She described what she saw in El Paso on Monday as overwhelming and among the most horrifying things she’s observed. Mothers with young children would only make the journey, she said, if they thought there was something better across the border.

“We’re treating children worse than we treat our animals,” she said.

Baughman described the setting as bleak and unbelievably hot, adding that it was important for these faith leaders to make the trip to bring a message back to their congregations around the country.

The message, she said, is “That this reality exists on our border is not OK. We have to keep showing up,” because once the issue is out of the news, keeping kids in cages becomes normal.

But what can someone interested in better treatment of chilren do?

Baughman said people who can’t get to El Paso to demonstrate can participate in protests and prayer vigils held at the Dallas ICE Detention Center on Stemmons Freeway, just north of Mockingbird Lane. Or they can attend asylum hearings held in Immigration Court in the Earle Cabell Federal Building on Commerce Street.

She invited people to volunteer with Dallas Responds, a project created by her church to help people who have been able to cross into the U.S. She said the group needs help with transportation — giving a family a ride to DFW Airport where they’ll leave to be reunited with their family. Sorting clothing, providing food or even become a sponsor are other opportunities to help, Baughman suggested. More information is available at DallasResponds.org.

Cazares-Thomas said he was frustrated during his visit, so he did some fact-finding while in El Paso, determined to return to Dallas with something positive he could do for people being held along the border.

And he found that something positive: “There’s a small shelter working with LGBT refugees,” he said. “My hope is to send a mission trip to the border to help fix it up.”

He said the experience Cathedral of Hope members got fixing up its LGBT young adult shelter could be used to help the border facility. Over the next week he’s planning to meet with the shelter’s rep in Dallas and hopes to send his mission in the next few weeks.