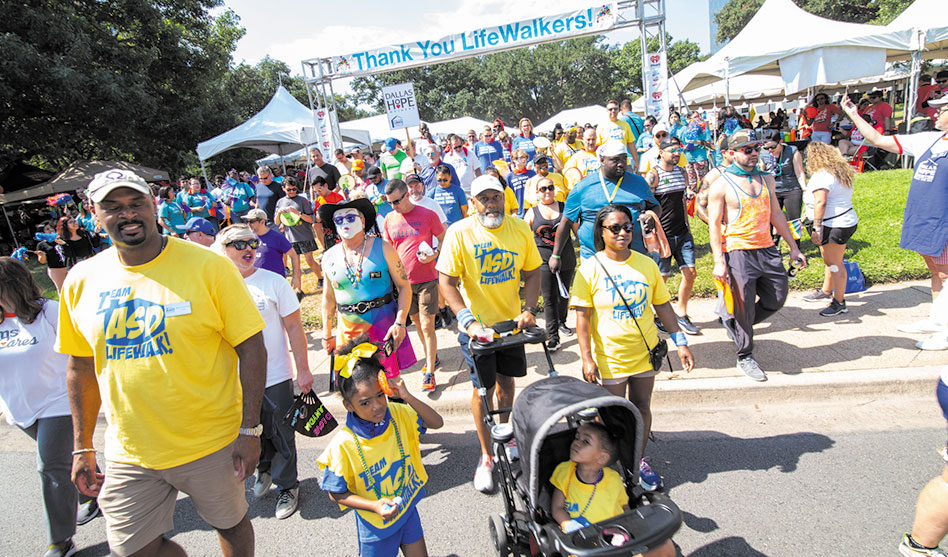 LifeWalk turns 30 this year, and while no outdoor event will be held, Jada Pinkett Fox is hosting a one-hour virtual LifeWalk on Sunday, Oct. 11, with the livestream beginning at 11 a.m. on Facebook, YouTube and at LifeWalk.org. And while the event is short of its $500,000 fundraising goal, more than $150,000 has already been collected at a time when need for services is at its highest level in years.

As people lost their jobs and their health insurance this year, Prism Health’s medical clinics that treat patients with HIV have seen a major uptick in traffic, Truong said. Because of the effect the coronavirus has had on everyone, there’s also been increased demand for behavioral health services. And with so many out of work, Prism’s housing assistance program has been strained.

Those services are funded, in part, through money raised by LifeWalk.

LifeWalk partners with other agencies providing services to people with HIV, and proceeds are shared among those organizations.

Among them are AIDS Services Dallas, which provides housing to people living with HIV; the Greg Dollgener Memorial AIDS Fund, which provides financial assistance for critical needs when other resources are exhausted; the Turtle Creek Chorale, which has an assistance fund to provide emergency help to its memberswith HIV, and UT Southwestern’s community prevention and intervention unit, which works to prevent sexually transmitted diseases.

A challenging year
For teams raising money this year, the pandemic has presented a challenge.

“This year has been hard on LifeWalk and other fund raisers,” Max Rippetoe said. “I have been very impressed and appreciative of the fundraising that I have been able to do this year.”
Rippetoe heads Team LUV, a group of Southwest Airlines employees who have participated in LifeWalk for years.

“I am fortunate to have a great group of supporters that I contact every year, and most of them have been very generous again this year — and a few of my supporters increased their donations 50 percent, 100 percent, 150 percent, which is fantastic, especially this year,” he said.

Rippetoe said he uses a personal appeal in his fundraising efforts. He writes an email to each member of his group asking for support, and after they donate, he writes a personal thank you note acknowledging their support.

“I’ve actually increased my personal fund raising this year 5-to-10 percent over last year, which includes a generous corporate match from one of my supporter’s employers, and a special donation from another long-time LifeWalk supporter that offered a one-day fundraising challenge,” he said. “I am hoping to raise a few more bucks during this final week of the LifeWalk season.”

Much of the money usually raised by LifeWalk teams is done through events, large and small. Many of those are drag shows held in the bars, and one of the annual events has been a miniature “progressive” golf tournament held in bars along Cedar Springs Road.
None of those options were available this year, although some online events were held. Rippetoe’s team has had to find other options, too.

“But this year, of course, we’ve done none of these,” he said. “Our team this year is smaller, but we still have impressive fund raising from some of our team members.”

He said he just hopes next year LifeWalk can get back to normal.

“The mission and work of Prism Health North Texas is dear to me and to many on our LifeWalk team, so we happily spend time, soliciting donations, year after year,” Rippetoe said. “I’ve been involved in LifeWalk for about 15 years, and this is the only annual fundraiser that I do. It’s important to me.”

Among the virtual events, were Young Advocates for Sexual Health’ ’90s virtual trivia night via Zoom. Sister Polly Von Acocker hosted a virtual beer tasting with a chilled beer pick-up from Peticola’s Brewing Company in the Design District, and Team Clover held an online silent auction. There was also a virtual dance party and a pet paparazzi contest that helped other teams raise LifeWalk money.

Truong said the online LifeWalk event will celebrate LifeWalk’s 30 years and the impact it has had on the community. He said he expects messages from performers from previous years, including from singer Lisa Loeb and drag super star Shangela. Denise Lee and Miss LifeWalk Polly Von Acocker will perform, and Prism Health North Texas CEO Dr. John Carlo will speak.

To participate in LifeWalk, you can either join a existing team or “fly solo.” Go to LifeWalk.org and create a fundraising page or simply hit the donate button and fill out the information.

Raffle tickets are also available online. The top prize is a Royal Caribbean cruise, with no expiration date since the cruise industry is currently closed due to COVID-19. Two airline tickets on Southwest accompany the cruise.

Second prize is two round-trip airline tickets on Southwest Airlines. All airline tickets are courtesy of Team LUV. Third prize is a one-night stay at the Melrose Hotel with complimentary parking and breakfast for two as well as dinner at Chuy’s.

Much of the money donated to LifeWalk is turned in the day of the walk. Without an event in the park, Truong said he couldn’t even venture a guess about how much more will be raised. But he’s hoping for a big finish for LifeWalk’s 30th anniversary this year.