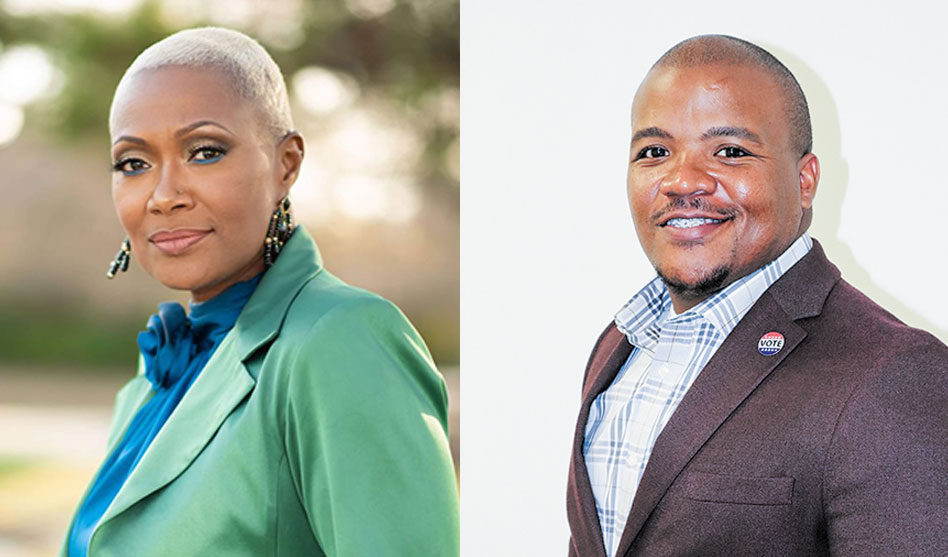 12 out candidates will be running for the Texas House, 1 for Texas Senate and 2 for Texas seats in the U.S. House

Venton Jones is poised to become the first gay male to serve in the Texas Legislature since Glenn Maxey, who served from 1991-2003, after winning his Democratic Primary race this week. Jones faced former Dallas City Council member Sandra Crenshaw, who had the most name recognition in the race.

Once Jones secured a place in the runoff, most endorsements flowed his way. He is expected to easily pick up the seat in this heavily Democratic district.

If he wins in November, Jones will be the first male member of the Texas House LGBTQ Caucus and the first openly HIV-positive Texas legislator. He’s said he hopes his position will lessen the stigma that is still associated with living with HIV.
Jones won’t be the first Black member of the LGBT Caucus, however. That distinction goes to Jolanda Jones from Houston.

Jolanda Jones is having a very good month. She won her runoff by a few hundred votes after winning a special election to replace Rep. Garnet Coleman a few weeks ago. Coleman, who retired earlier this year for health reasons, had served in the Texas House since the early 1990s and was an early and steadfast champion of LGBTQ rights.

The LGBTQ Caucus may grow by another member depending on the outcome of a race that may not be decided until a recount is taken. At press time, 122 votes separated out candidate Christian Manuel Hayes from Joseph Paul Trahan. Hayes is in the lead in a district that includes Beaumont and parts of Port Arthur. The district is currently represented by a Democrat who is not returning to the Legislature.

Of the other current members of the LGBTQ Caucus, one is not seeking re-election: Celia Israel is running for mayor of Austin instead. That election is in November.

The other caucus members — Jessica Gonzalez, Julie Johnson, Erin Zwiener, Mary Gonzalez and Ann Johnson — were either unopposed or won their primaries outright.

In addition, four other LGBTQ candidates for the Texas House won their primaries outright and will vie for seats in the November election. They are Madeleine Eden in District 17, Nelvin Adriatico in District 28, Justin Calhoun in District 73 and Shannon Elkins in District 98.

And Texas could have its first out state senator: Josh Tutt is running for state senate in District 18, which includes Victoria.

Civil rights attorney Jasmine Crockett won 60 percent of the vote in her bid to succeed Rep. Eddie Bernice Johnson in Congress. She faced Jane Hope Hamilton who was an advisor to Rep. Martin Frost and had served as chief of staff for Rep. Marc Veasey.

James Rodgers defeated James Harris by just a few hundred votes for the Republican nomination for the District 30 seat. Crockett, who is backed by Johnson, is expected to win the seat handily in this heavily Democratic district.

Texas may also have its first LGBTQ member of Congress. Out candidate Claudia Zapata won her runoff with 63 percent of the vote over Ricardo Villareal for U.S. House District 21. The seat covers an area west of Austin and San Antonio and includes the state legislative district of Rep. Erin Zwiener, who is bi. The federal district is currently represented by Rep. Chip Roy.

In statewide elections, Republicans chose corruption by a large margin. Ken Paxton, who has three securities fraud indictments pending against him and is being investigated by the FBI for malfeasance while in office, won his bid to run for a third term in a landslide.

His opponent, George P. Bush, current land commissioner and nephew and grandson of the Bush presidents, was late in getting his message on television. His charges of corruption didn’t begin airing until early voting was over.

Paxton was running anti-Bush ads the week before early voting began charging Bush with being a liberal. The worst he could find was Bush wanted to make the plaza around the Alamo more historically accurate.

Wayne Christian beat Sarah Stogner in the race for a seat on the railroad commission. Stogner came from behind in a crowded pack during the primary when she bared it all in a TikTok video that went viral and poured millions of dollars into her campaign.

On the Democratic side, Mike Collier will be the nominee for lieutenant governor. He beat state Rep. Michelle Beckley by about nine points.

Jay Kleberg is the nominee for land commissioner. Janet Dudding won her race to run for comptroller.

And Rochelle Garza will face Paxton in November in what promises to be a filthy fight for the position of attorney general. Garza won with an impressive 62 percent of the vote against Joe Jaworski who had higher family name recognition thanks to his grandfather who figured prominently in the Watergate investigation.