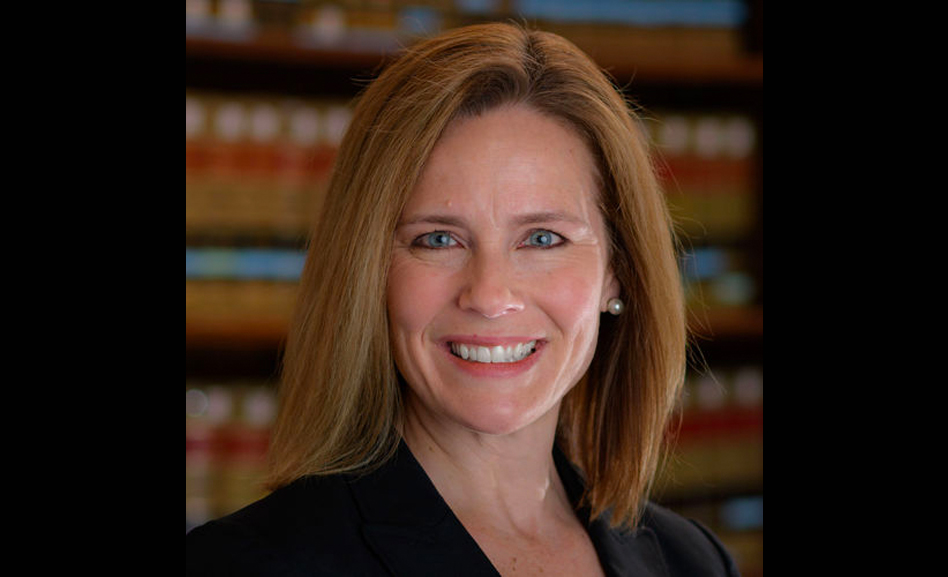 President Trump on Saturday, Sept. 26, announced his nominee to replace U.S. Supreme Court Justice Ruth Bader Ginsburg, and, as expected, his nominee is a jurist LGBT groups are expected to vehemently oppose.

Does this spell doom for existing protections for LGBT people under the law? Does it close the door to the Supreme Court for any future LGBT plaintiffs seeking their rights under the Constitution?

LGBT legal experts are both deeply concerned and somewhat confident.

Barrett comes to the nomination after serving just two years at the Seventh Circuit U.S. Court of Appeals, where she did not weigh in on any LGBT-related cases. However, in her years prior to that, as a professor at the University of Notre Dame School of Law, she signed onto a letter from Catholic Women supporting the church’s views on various issues, including that “marriage and family [are] founded on the indissoluble commitment of a man and a woman.”

During her 2017 confirmation process, one senator asked Barrett, via written questionnaire, how she could assure members of the LGBT community that she is committed to rendering decisions impartially and without bias or prejudice? Barrett responded: “I do not think it lawful for a judge to impose personal opinions, from whatever source they derive, upon the law. If confirmed, I will apply the law faithfully and impartially in accordance with the judicial oath.”

Sen, Sheldon Whitehouse, D-RI, asked in the questionnaire, “Do you agree that the church’s view regarding marriage as a union between a man and a woman is irrelevant to the legal question of the right of same-sex couples to marry?” And Barrett responded with one word: “Yes.”

She then repeatedly stated that several important LGBT decisions at the Supreme Court were “binding precedent that I will faithfully follow if confirmed.” They included Obergefell v. Hodges, U.S. v. Windsor, and Lawrence v. Texas.

LGBT groups opposed Barrett’s nomination then, saying her views on civil rights issues were “fundamentally at odds with the notion that LGBT people are entitled to equality, liberty, justice and dignity under the law.”

In a letter to then-Senate Judiciary Committee Chairman Charles Grassley, 27 national and state LGBT groups said in 2017 that they were concerned that Barrett’s “religiously-infused moral beliefs would inform her judicial decision-making” on issues of specific interest to LGBT people. And they expressed alarm that Barrett had delivered a paid speech to the “most extreme anti-LGBT legal organization in the United States,” the Alliance Defending Freedom.

In reaction to Trump’s nomination of Barrett to U.S. Supreme Court, Lambda Legal issued a statement, saying, “Barrett will unleash a Supreme Court majority that is hostile to all of our basic civil rights, and the impact will be felt for decades.”

In the coming U.S. Supreme Court session, the court is set to hear Fulton v. Philadelphia, a case in which a Catholic adoption service wants the court to declare that it has a First Amendment right to violate a Philadelphia law against sexual orientation discrimination. And a Virginia school district is expected to appeal its loss in a case that tests whether Title IX of the federal Education Amendments Act — which prohibits discrimination on the basis of sex in education— prohibits discrimination on the basis of sexual orientation and gender identity.

There is some optimism still around the Title IX case. That’s because, just last June, a 6-3 majority of the Supreme Court ruled that Title VII of the federal Civil Rights Act, which prohibits job discrimination on the basis of sex, also prohibits discrimination on the basis of sexual orientation and gender identity. That ruling, Bostock v. Clayton County, is expected to serve as precedent for the Title IX litigation.

While Ginsburg is gone now from that 6-3 Bostock majority, Chief Justice John Roberts, who joined the majority opinion, and Justice Neil Gorsuch, who authored it, are still there.

And “because Justice Gorsuch’s opinion for the court was so relentlessly textual,” said Stanford University Professor Pamela Karlan, who successfully argued the case for the gay employee in Bostock, “I don’t see the court coming out the other way on Title IX’s coverage.”

But Both Karlan and Davidson expressed concern for what the Supreme Court didn’t rule on last session: accommodating religious employers, such as the one in the Philadelphia case set for oral argument on Nov. 4.

“The outcome could have broad implications for the application of nondiscrimination laws and government policies around the country,” said Davidson.

Davidson said he doesn’t think existing marriages of same-sex couples are at risk.

“Those who married same-sex partners after the Obergefell decision did so in compliance with the law at the time and have strong due process rights in not having those lawful marriages dissolved against their will,” said Davidson. “Whether a new justice will respect the precedent of Obergefell going forward, however, is of course of concern.”

But Jenny Pizer, senior counsel at Lambda Legal, notes that, even with the marriage ruling in favor of same-sex couples, “We still have had to continue fighting for family equality for LGBTQ people and their children.”

“For example,” Pizer continued, “we are in court now fighting for two married same-sex couples whose daughters are being denied citizenship by the Trump administration even though the law is explicit that their American citizen parents’ being married entitles them to citizenship.”

Barrett is Trump’s third opportunity to select a Supreme Court justice. He previously nominated, and the Senate confirmed, two other federal appeals court judges to the Supreme Court: Neil Gorsuch and Brett Kavanaugh. Gorsuch’s nomination was marred by the controversy that ensued when Senate Majority Leader McConnell refused to give consideration to then-President Obama’s nominee, Merrick Garland, even though Obama still had 11 months to go in his second term. McConnell left the seat open until after the 2016 presidential election and, because Trump won that election, the Republican president was given the opportunity to appoint the seat left open by the death of Justice Antonin Scalia in February 2016.

Kavanaugh’s confirmation was marred by controversy surrounding accusations that emerged following his nomination that he had sexually assaulted women. He denied those accusations, and the Republican-controlled Senate approved his nomination.

The Senate approved Gorsuch’s nomination by a vote of 54-45; it approved Kavanaugh by 50-48.

McConnell has made clear he has to votes to confirm the nominee and that he intends to rush through that confirmation process ahead of the Nov. 3 presidential election.

President Trump said Saturday that Barrett “will defend the sacred principle of equal justice for citizens of every race, color, religion and creed.”

Barrett professed “love” for the United States Constitution and said she is “mindful” of the legacy of Justice Ginsburg, whose seat she has been nominated to fill. Ginsburg died at age 87 on Sept. 18, following a long struggle with cancer.

Barrett noted that Ginsburg was good friends with Justice Antonin Scalia, for whom Barrett clerked, despite the fact that Ginsburg was one of the court’s most liberal jurists and Scalia one of its most conservative.