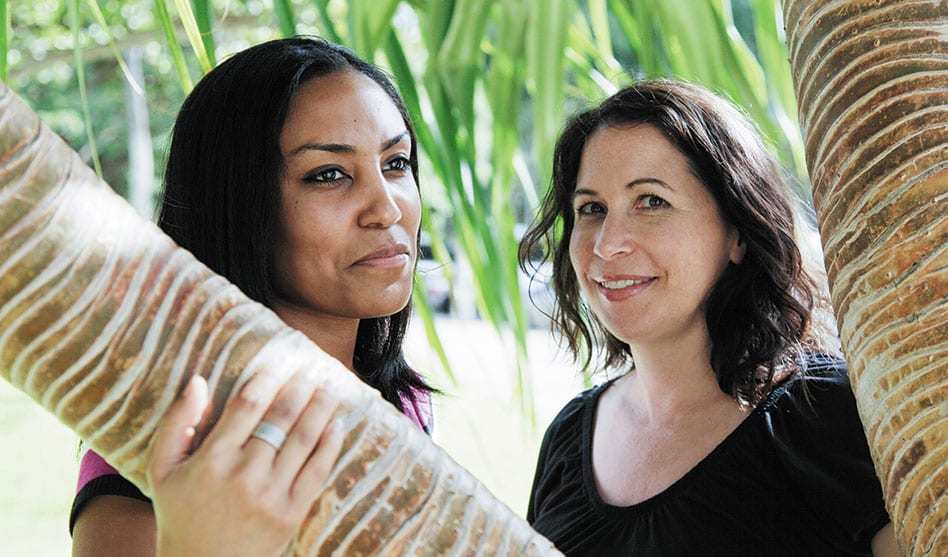 In this 2011 file photo, Taeko Bufford, left, and Diane Cervelli, right, pose near Waikiki beach in Honolulu. In 2007, the couple from Southern California tried to book a room at the bed and breakfast because it’s in Hawaii Kai, the same east Honolulu neighborhood where the friend they were visiting in Hawaii lived, but the B-and-B owners refused, citing religious objections. (Eric Risberg/Associated Press)

LGBT legal groups told the U.S. Supreme Court in the last week of 2018 that it is simply too soon for the court to become involved in litigation over President Donald Trump’s proposed ban on transgender people in the military.

“The government’s desire for an immediate resolution of this litigation is not a reason for the extraordinary exercise of this court’s authority to review a case before the court of appeals has rendered a decision,” according a brief from the National Center for Lesbian Rights and the GLBTQ Legal Advocates & Defenders. The two groups are jointly representing several transgender people in two lawsuits against the proposed ban (Stockman v. Trump and Doe v. Trump).

NCLR and GLAD also note that a district court has set a trial date of July for one of the cases — Stockman v. Trump — in Los Angeles.

“The government offers no credible showing of urgency that justifies bypassing that careful and respectful consideration by the lower courts,” the brief notes.

NCLR and GLAD urged the Supreme Court to deny review of the injunction at this point and to allow the trial on the constitutionality of the proposed ban to go forward.

All three appeals are on a list of cases to be considered by the justices in private “conference” on Jan. 11. The justices could take any of several different actions at that time, including re-scheduling the cases for a later conference. But if four justices agree to hear Trump’s appeal, the appeal will likely be slated for oral argument this spring.

The ACLU is representing a fourth group of service members in a lawsuit — Stone v. Trump. The Trump petition to the Supreme Court Nov. 23 suggested the high court consolidate all four cases for a review of the constitutionality of the proposed ban.

Trump announced in 2017, via a tweet, that he intended to ban transgender people from the military. That proposal essentially sought to reverse a policy developed under Secretary of Defense Ashton Carter during the Obama administration. The so-called “Carter Policy” said service members would not be discharged or denied re-enlistment “due solely to their gender identity or an expressed intent to transition genders.”

The administration later “revised” the wording of Trump’s original proposed ban to require that, with few exceptions, anyone with a history of gender dysphoria be banned. It also says that transgender people without gender dysphoria can serve, but only if they dress consistent with the gender stated on their original birth certificates.

This latter policy resembles the “don’t ask, don’t tell” policy that banned openly-gay service members for many years and that was eventually repealed by Congress.

In addition to the transgender military ban cases, the Supreme Court has before it:

• Three cases testing whether Title VII of the Civil Rights Act can be used to prohibit discrimination based on sexual orientation and gender identity. Those cases were scheduled for conference today (Jan. 4).

• An LGBT-related case from the Hawaii Supreme Court — Aloha Bed and Breakfast v. Cervelli — that asks whether the operator of a bed and breakfast can refuse to rent rooms to guests based on their sexual orientation by citing personal religious beliefs. This case, too, is on today’s conference list;

• Another religious belief-versus-human rights law case — Klein v. Oregon — in which a state court found a baker violated a state law prohibiting sexual orientation discrimination in public accommodations when she refused to bake a wedding cake for a same-sex couple. Briefs are due Jan. 25.

• And Doe v. Boyertown, which asks whether a school policy allowing transgender students to use the high school restroom and locker room consistent to their gender identity violates the constitutional rights of other students. Briefs for the case are due Jan. 22.