Let’s have a kiki 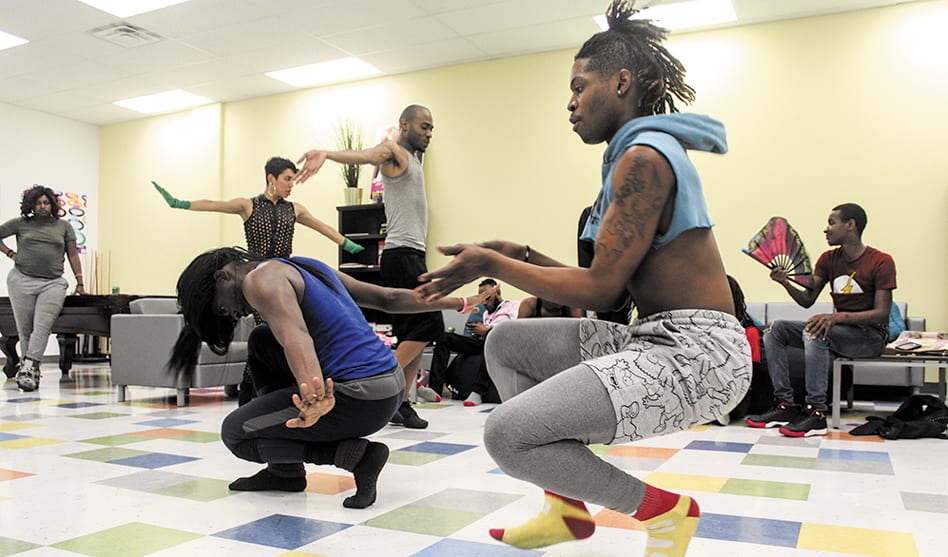 Jet, left, dips down before striking a floor pose while LaToby Daida duckwalks during a rehearsal at Vogue Academy.

As the Arts District readies for its next Pride Block Party, members of the Vogue Academy plan to have a ball

Sweat drips from a panting Toriell Williams as he removes a long black wig from his head. Williams, who goes by Jet on the dance floor, just spent 20 minutes spinning and dashing to the floor to strike a pose during pulsating moments boomed from a black speaker. Sporting a tight blue tank-top and gray tights with two black knee pads, Jet flashes several hand waves before he drops to another seemingly back-breaking position.

On Friday nights, in a safe space unit off North Stemmons Freeway, Jet meets with friends to practice a series of explosive dance moves they call voguing. For them, the multi-colored tile floor inside United Black Ellument’s community center is enough room for each dancer to let loose and vogue. (United Black Ellument is a program of Resource Center).

For those who have not seen Paris is Burning (the 1990 documentary about the history of ballroom culture in the 1980s) or even Pose (the fictionalized TV series on the same era, which just started its second season on FX), voguing originated in uptown New York as far back as the ’60s and was pioneered by mostly closeted black LGBTQ individuals to free themselves of social strictures of the time, when homosexuality and even cross-dressing was criminalized. More than just a form of dance, voguing represented a cultural war-cry for the sexually disenfranchised. Since then, the art has spread across the U.S., especially where a ball is happening.

And while you may not have been to a ball before, voguing enjoys underground popularity in Dallas. But if you don’t know where to find it, here’s a suggestion: The Pride Block Party in the Dallas Arts District will once again feature a kiki ball as part of its programming on June 21. (See sidebar, below.)

U-BE’s space is one place where local voguers can practice their moves, preparing to rock down a runway during an upcoming ball. But vogue culture is often misunderstood. Unlike other forms of dance, voguing usually does not require training. More so, it’s a culture centered around a community.

U-BE, which recently moved its location from Harry Hines Boulevard, bumps house music on the third Friday night of every month for its Vogue Academy. The beat suits the sculptural rhythm of voguers mastering their death drops.

The bass from the black speaker fades, and Calvin Payne, who goes by Cali, caresses his face with his hands, dips and strikes one last pose in front of a large vanity mirror placed on the floor. After the almost non-stop three-hour dance session, the voguers stroll to a changing area where they slip out of their dance attire and put on their street clothes.

“Vogue is not really a trained thing,” says Cali, a voguer originally from Dallas who now lives in Los Angeles. “It’s something that’s always within you. So, if you truly do not understand the culture, the best way to get involved or learn how to understand is to surround yourself with the good people who do and be here at U-BE for practices to get a taste of what it would actually feel like to be at a ball.”

For some, it is simply another form of dance. For others, it is a way of life centered on self-expression that battles adversity.

“I know a lot of people and they always say like it’s telling a story, but for me it was like an escape from the world, like the real world,” Jet says. “I’d be so stressed out before I’d come and vogue, and every time I see people dance, I feel they are so free, and they feel so good afterward.”

He first discovered the vogue scene in L.A. when he met a girl named Pack Rat who was big into the vogue scene, and she encouraged him to attend classes. Soon after, he fell in love with it. Jet, who moved to Dallas from Mississippi in 2013, says vogueing is a way to release his femininity. Since he began vogueing nearly three years ago, he has used it as a means to express something he usually keeps to himself.

“For me, it’s like letting it out — letting out all those expressions, letting out that cunty feeling, because I hold in my feminine ways a lot,” Jet says. “But when I come here, I let it all out.”

LaToby Daida, a Dallas-native wearing a powder-blue cutoff shirt and leggings, dances alongside Jet in front of a large vanity mirror on this Friday, jumping up and dropping to stationary poses with attitude and flair and decisiveness.

“Basically, it’s like a pose for a picture,” Daida says.

For Jet, Cali and Daida, a night at Vogue Academy is another session for the three voguers to prepare for their next ball … which could be this week. Members of U-BE, including vogue instructor JRock, will again bring the ball to Pride Night.

“Our visitors thoroughly enjoyed last year’s kiki ball — it was one of the most popular events of that evening,” says Stacey Lizotte, director of adult programming for the DMA. Because the DMA is currently mounting the fashion exhibition Dior: From Paris to the World, Lizotte sees the synergy this year as being even greater.

“Kiki balls are a great mix of performance art, dance and fashion. This mix is a reflection of the arts culture in Dallas, especially in the Arts District,” says Lizotte. (This year, in fact, the performance will be in the atrium on a large stage with an actual runway.)

Jet says there are five elements to vogueing — cat walking, duck walking, hand moves, spins and dips and floor performances — and people attempting to dance should know what they are doing to avoid injury. But really, there is only one move in voguing: to look ferociously fabulous. 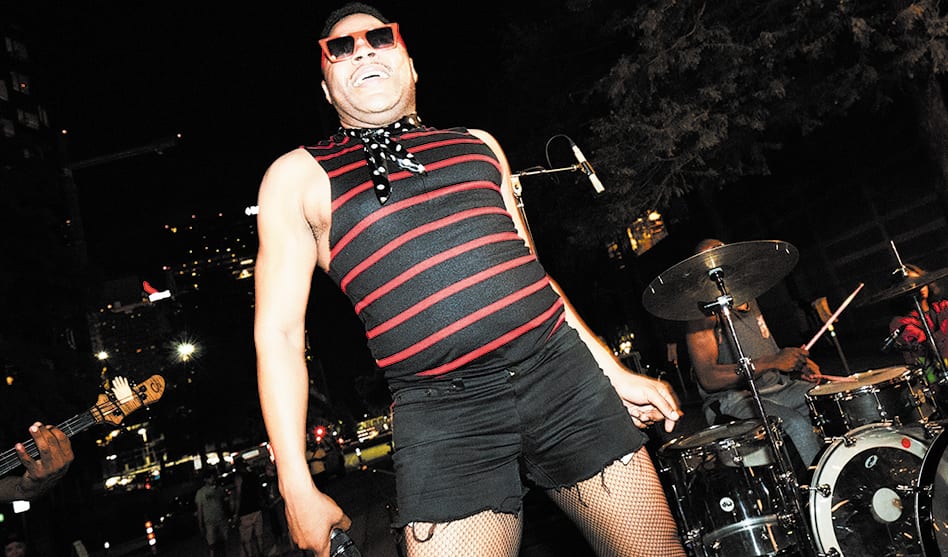 The Dallas Museum of Art has long sponsored Late Nights at the DMA, and has made the open-door policy an even has bigger deal by throwing a summer block party each June. In 2018, organizers decided why not theme that event around Gay Pride Month? For the first year, they didn’t know what to expect, despite months of planning and input from gay arts and social groups from around town. And it ended up being a smash.
For 2019, the DMA has expanded the event even further, eliciting the participation of both its neighbor, the Nasher Sculpture Center, and the Dallas Arts District to turn the art-centric summer mixer into the spectacular Pride Night Block Party.
Sprawling across acres of space on June 21, from the galleries of the DMA and the Nasher along the grounds and streets in between, the festivities will include food trucks, live music, theatrical performances (including a kiki ball; see story Page 22), film screenings and tours of the resident artwork.
Among the highlight:
• Actress Janelle Lutz, acclaimed for her impersonation of Judy Garland, performing
a musical history (with accompanist Adam Wright) of the impact of the woman
whose death is seen as a marker of the launch of the modern gay Pride movement.
• Verdigris Ensemble will present an oral history of gay Dallas through the eyes of
activist Patti Fink.
• The locally-made documentary Raid of the Rainbow Lounge and the camp comedy
To Wong Foo, Thanks for Everything, Julie Newmar will screen at times throughout
the night.
• Vogueing will be on display at a kiki ball, sponsored by United Black Ellument.
• Musicians Dezi 5, pictured, K. Avett, Chris Chism Simply Queen and more will
sing live.
• Rose Room mistress of ceremonies Cassie Nova will lead a family-friendly drag
queen storytelling, while queens Frida Monet, Bleach and Raquel Blake will perform
live; there will even be a fashion runway finale to close the evening. 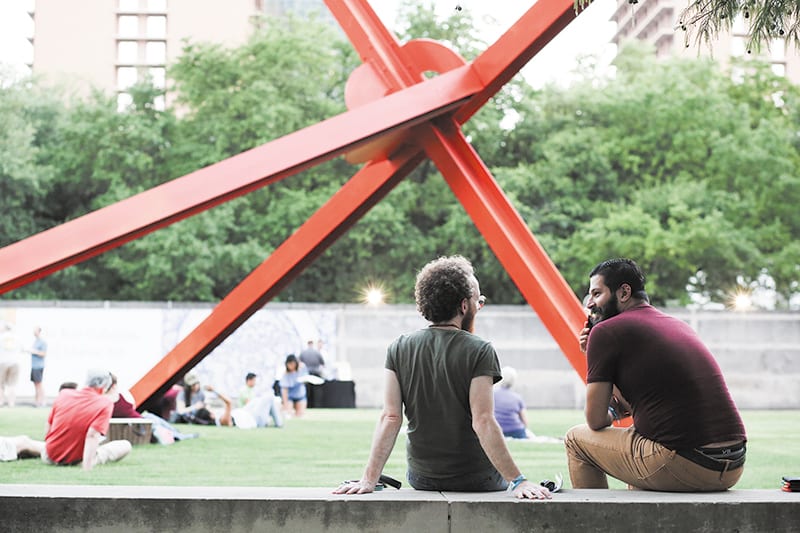 Pride Block Party, at the intersection of Harwood and Flora streets and inside the DMA and Nasher. June 21, 6 p.m.–midnight. Admission is free.