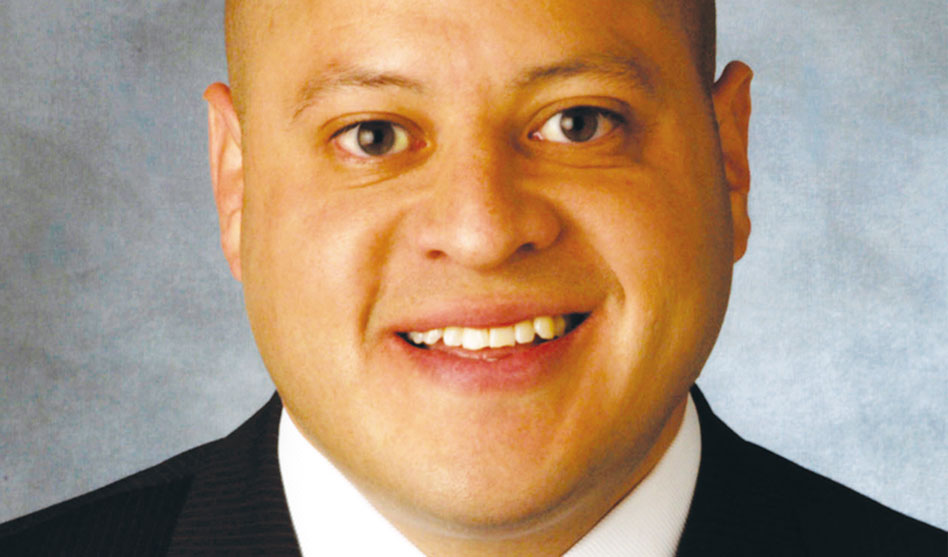 2020’s grand marshals return for their day in the sun

In 2020, for the first time since 1982, Dallas’ Alan Ross Texas Freedom Parade and the annual Festival in the Park, planned for the first weekend in June, were cancelled as Texas continued to see record or near-record numbers of new COVID-19 cases daily. In addition, most of the attention of our country, including here in North Texas continued, rightfully so, to be focused on the ongoing

protests happening across the nation in the wake of George Floyd.
Dallas did celebrate Pride that year with a virtual party in late July. And even without an in-person parade, Pride needs grand marshals. But instead of submitting a list of nominees to the community for a vote as in the past, in 2020 the Dallas Pride committee decided to name the top six nominees — seven actually, because “one” nominee was a couple who have dedicated their lives together to helping the community — as 2020 Dallas Pride Co-Grand Marshals.
Since there was no Pride parade in Dallas in 2021, thanks again to the COVID pandemic, this weekend’s celebration will see

Dallas’ first Alan Ross Texas Freedom Parade since 2019. And since those seven co-grand marshals from 2020 never had the chance to mark that honor by appearing in a parade, Dallas Pride Executive Director Jaron Turnbow explained, the Pride committee opted to name them as co-grand marshals for 2022 and give them their day in the sun. 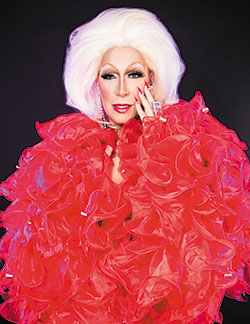 Cabrera volunters with the Wings Foundation, a 501(c)(3) organization that helps American Airlines flight attendants in need, and with several other organizations including co-chair for Lip Sync Dallas. He describes himself as “a proud member of the Dallas recovery community.” And he is the resort director for VACAYA, an LGBTQ travel company that charters cruises and resort destination vacations, and the lead flight crew drag queen member for FABSTAYZ, a company specializing in vacation rentals that are safe and friendly for the LGBTQ travelers. He hosts regular drag brunch events at Reservoir at the Toyota Music Factory and performs at other drag events around the DFW Metroplex. 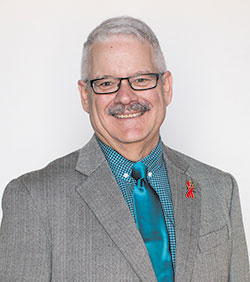 David Hearn moved to North Texas in 1988 when he was transferred to the JCPenney Corporate Office in Plano. He worked at the corporate headquarters for the company until 2011 when he retired after 38 years with the company.

Hearn has had two partners who died of AIDS: Gerald Kennedy, his partner from 1972 to 1980, who died in 1987, and Greg Dollgener, his partner from 1989 to Dollgener’s death in 1994. In 1996, Hearn and a group of his friends founded the Greg Dollgener Memorial AIDS Fund, and Hearn has served on the organization’s board since its founding. After serving as president and treasurer, Hearn is now the organization’s assisting treasurer.

Through the years, Hearn has participated in numerous organizations, including GALA North Texas, GALA North Texas Business Group from 2013-2017, AIDS Services of McKinney, and Prism Health North Texas (previously known as AIDS Arms), and he has been recognized many times for his volunteer awards, including receiving KRLD Citizen of the Week, the 2009 Open Heart Award, the Randy Franklin Memorial “I Care” Community Service Award, the Hearts and Heroes Spirit Award, the John Leaphart Memorial Award for Community Service, the 2016 Readers Voice Awards LGBT Role Model, the Heart and Hands Award, the Linda Sparkman Memorial Spirit Award and the Diamond Rose Award.

Hearn is a member of Cathedral of Hope UCC and each year helps organize MetroBall, the signature annual fundraiser for GDMAF. 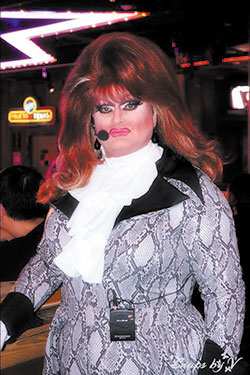 For more than 30 years, Bill Lindsey and his husband Michael Champion put their time, talents and passion to use advocating for LGBTQ equality and raising money for LGBTQ and HIV/AIDS causes, until Champion’s untimely death from COVID in January 2021, which he contracted while caring for patients at the nursing home where he was director of nursing. Since then, Lindsey has continued their work with the support of the extensive chosen family he and Champion had created.

As a registered nurse, Champion worked to educate the community about HIV and on dealing with LGBTQ people in the aging and long-term care communities. He received the National Director of Nursing in Administration award in 2009 and again in 2017.
Beginning in the late 1980s through the mid-1990s and beyond, Lindsey and Champion founded and led an organization called Glitz-n-Glitter that brought together a variety of performers to stage regular fundraising shows. Both competed in drag pageants as Linze Serrell and Sable Alexander, and both won several titles. Lindsey sings live and was a Voice of Pride semi-finalist. His drag titles include Miss Charity America (twice) and 2005 Miss Gay Texas At Large. Champion was Miss Charity America Emeritus 2006 Miss Gay Texas State at Large. 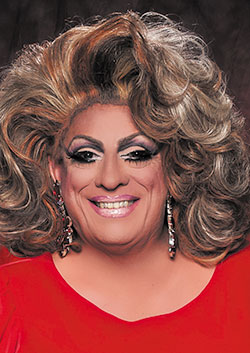 In 2008 Lindsey and Champion founded the Miss Gay Texas State Pageant System which, like the couple’s other undertakings, focuses on fundraising for the community.

Since his husband’s death, Lindsey continues his work, living by his motto, “Raising one dollar at a time for any cause!” 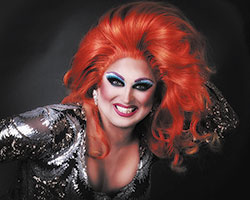 James Love grew up in and around Dallas, performing in drag for the first time at a Presidents Day show benefitting the Dallas Gay and Lesbian Alliance. He was president of DGLA’s youth group, GLYA, in the early 1990s.

Love has worked in the Rose Room, the largest show bar in the South, as Cassie Nova, since 1993, and he became the Rose Room show director about seven years ago. He is the regular emcee of the Rose Room shows, hosts Cassie’s Freak Show each Monday at JR.’s Bar & Grill and in 2020 hosted Dallas Voice’s virtual Pride Party.

As Cassie Nova, Love has participated in numerous fundraising efforts over the years, and each December he hosts Cassie’s Annual Freakmas Party at JR.’s, a drag show and raffle that raises money for the Secret Santa Program which purchases Christmas gifts for students in the Personalized Learning Preparatory program at Sam Houston Elementary Program.

Love is also a contributing columnist for Dallas Voice, offering help and humor in his Ask A Drag Queen column, published online and in print on the second and fourth Fridays of every month. He and his husband of 17 years, Jamie, live in Midlothian with their five dogs and a giant tortoise named Ruby.

Adam Medrano
(photo above) Former Dallas City Councilman Adam Medrano was first elected to that office in June 2013. In his final term on the council he was one of three openly-gay council members and Dallas mayor pro tem, after being chosen by his colleagues as deputy mayor pro tem in his third term. Medrano was chair of the city’s LGBT Taskforce for more than seven years. Under his leadership, the taskforce supported full inclusion of spouses and partners of LGBTQ employees in city pension benefits for civilian and first responder employees, full inclusion of spouses, partners and dependents of LGBTQ employees in city healthcare benefits, and fully-inclusive city healthcare benefits per WPATH standards for trans employees and their spouses and dependents.

The taskforce organized a meeting between community leaders Dallas Police Department officials in 2016 to discuss updates regarding a then-ongoing spate of attacks in the Oak Lawn and interfaced with Mobility Planning to explore safety implementations in the Oak Lawn area that same year. The taskforce also established the Outlast Youth 501(c)(3), installed 10 rainbow crosswalks in Oak Lawn and Cedar Springs and championed a resolution to fly the custom-designed city of Dallas Pride Flag in each June since 2020.

Before being elected to the city council Medrano served on the Dallas ISD Board of Trustees. First elected in 2006, he was elected first vice president of the school board in 2007, then was elected board president three separate times. He also worked as a supervisor with the city’s Parks and Recreation Department.

Medrano continues to volunteer with a variety of public service projects and organizations. 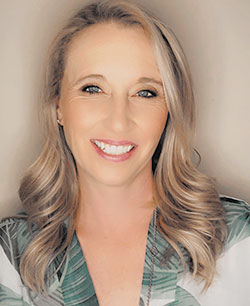 Kristi Wilson is the national accounts manager for Andrews Distributing and a longtime LGBTQ community advocate. She’s worked for Andrews for 16 years, and, since the beginning of her career, has served as Andrews’ primary representative for the company’s partnership with the Dallas Tavern Guild.

Wilson regularly attends Dallas Tavern Guild meetings and said she appreciates the chance to support the LGBTQ community through building relationships and spreading awareness. Her goal as the voice of Andrews has always been to work hard to earn the trust and confidence of those in the LGBTQ community.

In addition to her work with Dallas Tavern Guild and supporting bars and organizations, Wilson has, for the last decade, also worked with Caven Enterprises’ The Holiday Gift Project for Sam Houston Elementary.

Wilson and her husband Mike, an active LGBTQ advocate for the last 27 years, have been married for 17 years and have two children, Garrett and Brylee. When asked what the grand marshal nomination meant to her, Wilson said, “It means so much to even be acknowledged as someone who has made an impact in this community; that is what I have wanted from the beginning. I hope to continue to work closely with the Dallas Tavern Guild and all the bars and organizations contributing to this community.

“Pride is not about one day or one event,” she added. “It’s supporting everyone all year. I’m blessed to even be nominated for such an honor.”