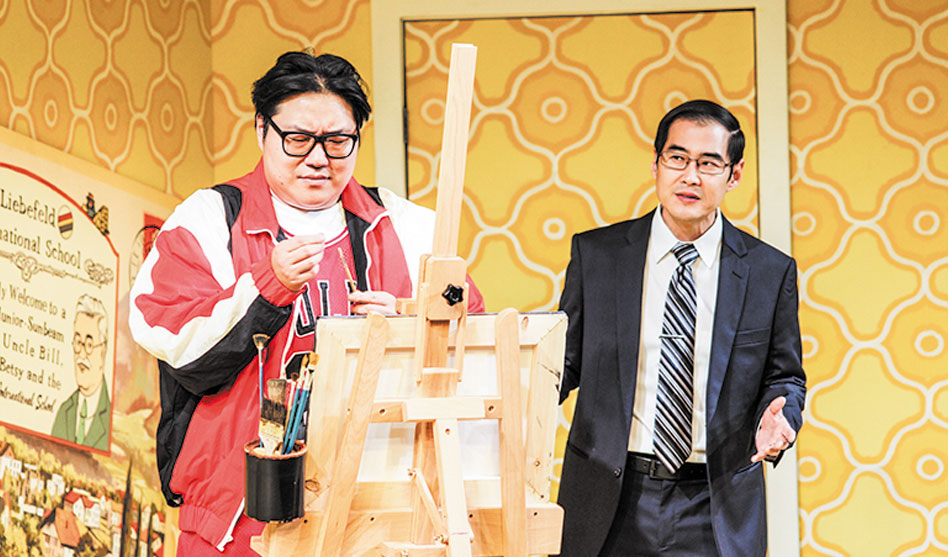 If Oscar Seung had things his way, he’d be at home with his husband and their two dogs. The self-described introvert prefers anything that involves staying in. Yet, he’s got this big lead role at the Dallas Theater Center to work on, and for him that’s a big deal. He’s excited to bring representation to the stage in The Supreme Leader — even if he is playing North Korean dictator Kim Jong-Un.

“I was a little nervous about this character because of what he means to the Korean community,” Seung said by phone. “I had a lot of conversations with Korean friends and my husband.”

The Supreme Leader is currently in previews for audiences with opening night set for Thursday, Nov. 4.
Seung, 35, plays Jong-Un in Don X. Nguyen’s story of the then-future leader in his time at a Swiss boarding school. Described as a coming-of-age comedy, the play takes a unique look at pre-dictator times in Jong-Un’s life.

“So, the thrust of the show seems like a romantic comedy,” Seung said with a laugh. “There is this sort of push-pull battle for his soul, and it addresses the idea of choice against expectations.”

Seung auditioned for the role in 2019. Since he is both Asian-American/Pacific Islander and LGBTQ, there was some reconciliation to be had before Seung could approach the role, even if it was in a lighter tone. Seung took it on with a bigger picture in mind — one that is important to his heritage and being seen. 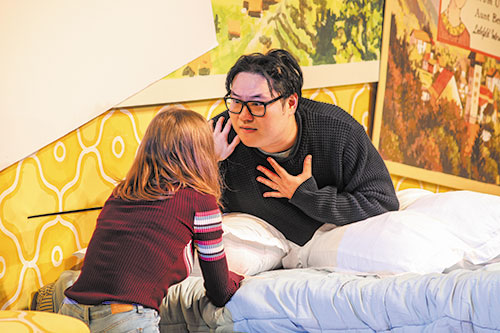 “Yes, I disagree with him and what he’s done to his country. There is so much baggage with him” Seung said of Jong-Un. “But I realized that if I turned down the role because I simply don’t agree, that is a problem. Often anyone who doesn’t think like us is vilified. I thought ‘Well, shit. I don’t wanna be part of the problem.’”

Plus, Seung said, he’s “super excited” to have landed the role.

“I can’t believe I get to do this. I’ve never seen an Asian-American as the lead in anything, so I’m excited to tell this story, see what I can do with it and represent my community,” he said.

Everyone now knows Jong-Un as the dictator they’ve seen in the news, but The Supreme Leader is set well before all that. So Seung was able to find ways to identify with Jong-Un. There is a very slight Swiss connection (Seung was born in Lausanne), but more so, he could identify with the immigrant experience and fulfilling family expectations.

“I know exactly what that feels like: Moving to America, I’m this big, giant Asian person. I’m flamboyant and very clearly gay, and I grew up in Arlington,” Seung said. By compartmentalizing those aspects of himself, he was able to create his own character and see Jong-Un in a different light — at least for this show.

“Here he was in a different country, with mixed feelings toward his American friend Sophie and his father and his country. It was a great reminder that even if you vehemently disagree with someone, they are still a three-dimensional human being,” Seung said. “Yes, I’m repulsed by his actions, but I can also see him as a person.”

Seung was eight when his family moved to Arlington, immigrating to be closer to extended family. “I remember it well. When we were leaving the airport here, it was humid and hot, and I was this little gay diva speaking in French, complaining about the heat,” he said.

Seung’s performing interests started in music. It was a respite from learning a new language and doing poorly in school. He felt out of control.

“I had this inability to claim these emotions, so I can relate to this internal rage that Jong-Un has in the play,” he said.

But Seung expressed his rage through music by studying violin and piano. He switched to opera while attending TCU, where he degreed in vocal performance. But acting and the stage held a secret fascination for him.

“It was such a secret. I never saw anyone like me onstage or in film, so I felt I didn’t have a place there as an actor. My boyfriend — now my husband — asked me if I was happy, and that’s when I decided, I wanna be an actor,” Seung said.

He was 24, he quit his full-time job, got his headshots and launched himself into the theater community.

Plus, he’s navigated a career on his own terms as a BIPOC/LGBTQ actor. He found himself cast in traditionally non-Asian roles and refused to do accents if asked to play an Asian-American character. His integrity and talent led him to higher profile projects.

Seung can be seen in We Can Be Heroes on Netflix, directed by Robert Rodriguez, and The Turkey Bowl on Hulu. He’s also a voice actor who played in Funimation’s Yuri!!! on Ice, which centers on two gay characters.

Oh, and now he’s the lead at the Dallas Theater Center.

“The biggest thing for me is visibility. I’m not a role model,” Seung said. “Seeing someone like me up there is incredibly important. Or seeing something like Yuri!!! on Ice, I know I would have felt less alone. It all goes back to visibility and reminding those who may feel invalidated that they are not alone.”

The Supreme Leader runs through Nov. 21 at the Dallas Theater Center in the Wyly Theatre. For more information or tickets, visit DallasTheaterCenter.org.