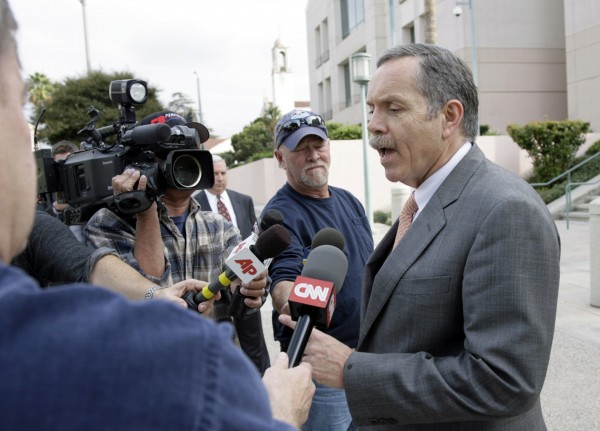 Attorney Dan Woods, right, speaks to the media at the United States District Court in Riverside, Calif., after making arguments on the U.S. military’s “don’t ask, don’t tell” policy last October. Woods, who represents Log Cabin Republicans who are the plaintiffs in the case, will be in Dallas this weekend to speak at the LCR National Convention. (Francis Specker/Associated Press)

Several prominent GOP members will be spending some time in Dallas this weekend to participate in the Log Cabin Republicans’ annual convention, which will take place at the Hilton Anatole Hotel.

The event, which began Thursday, April 28, and runs through Sunday, May 1, will include discussions and speeches from politicians, lawyers and members of the media.

Dan Woods, lead attorney in LCR’s lawsuit challenging the military’s “don’t ask, don’t tell policy,” will be speaking at the convention about the importance of the case, its current standing and some of the war stories involved in the suit.

“People think this case is over and it’s not,” Woods said in a recent interview. “Our case is alive and kicking.”

Woods said there are two different things going on with the case: Although LCR won at trial, the government has decided to appeal the decision. After months of legal arguments and appeals from both sides oral arguments are supposed to begin next week.

Despite the legal battle and action in Congress to repeal the anti-gay law, Woods said as of this point the repeal of DADT is not in effect. He said that steps have to be taken to get the military ready and although there are some efforts in this area service men and women are still suffering from this legislation.

“There is no timetable as to when this repeal will become affective,” Woods said. “Although the numbers are smaller the government is still investigating people under ‘don’t ask, don’t tell.’”

Another problem Woods said he has run into is that many potential presidential candidates have made stopping the repeal part of their platform. Political issues are key in this legislation’s evolution, according to Woods.

“The government has said they don’t want the courts deciding how our military is run. What’s really going on is President Obama wants to take credit for all this to help his next campaign,” Woods said.

In addition to talking about the current status of DADT, Woods said he will talk about some of those suffering from this legislation.

“We are going to focus on stories about those affected by ‘don’t ask, don’t tell’ and the heart-breaking tales of how it impacted them and the unit they worked on,” he said.

One such servicemember, according to Woods, was Alexander Nicholson, who was kicked out of the Army because he was caught writing a letter to a former boyfriend. Another story involved a lieutenant colonel in the Army Reserves whose name cannot be used.

“This is just another story where someone is being denied their constitutional rights while they work to protect ours,” Woods said.

LCR Executive Director R. Clarke Cooper said the repeal of DADT is a front page and front burner issue for the organization.

Barr, who ran as the Libertarian candidate in the 2008 presidential election, served in the House of Representatives as a Republican from Georgia from 1995 to 2003. During his time in office he authored and sponsored the Defense of Marriage Act, which was enacted as law in 1996.

At the federal level the legislation recognized marriage as being between a man and a woman and declared that individual states can choose not to recognize same-sex marriages performed in other states.

Barr apologized in 2008 for his role in creating the legislation and now supports the Respect for Marriage Act, which would repeal DOMA.

Rob Schlein, president of the Dallas chapter of Log Cabin Republicans, said Barr is one of the speakers he is most looking forward to hearing, since the former congressman switched his position on DOMA. Schlein said it’s important for members of the LGBT community to hear this information due to misconceptions about the GOP’s opinion toward LGBT people.

“The Republican Party is one of liberty and freedom,” Schlein said. “Gay people should feel at home in the party.”

Cooper said having Barr available to speak at the convention was a wonderful advantage since he was the father of DOMA,

“We started at the top,” Cooper said. “It’s anti-government for the federal government to have such power over the states like what is granted in the Defense of Marriage Act. It’s going to die, but when that happens is just speculation right now.”

Cooper said communication is an important factor in battling for LGBT rights within the GOP.

“We need to let people know in the gay community who are businessmen, or servicemembers that they have a home in the GOP,” he said.

Cooper said the general consensus surrounding the idea of a gay Republican has become a matter of levity to him.

“I joke for gay Republicans there is coming out twice,” he said. “You come out first when you’re gay and then when you’re a Republican.”

Cooper said marriage equality at large is a growing issue on a broader scale. Although it is unlikely that debate over DOMA will be seen on the floor this year, Cooper said events like these give Log Cabin Republicans a chance to educate the entire party.

“We use traditional conservative values from the 19th century,” he said. “We should not regulate or impede on our neighbors’ rights and someone born differently should not be treated differently.”

Cooper said it is important for the entire GOP to know that Log Cabin Republicans are also interested in pushing the party’s larger and broader agenda.

“We want to educate while working with our fellow Republicans,” he said.

Republicans will be responsible for giving members of the LGBT community the liberties they want, according to Schlein, who said that Democrats are the ones perpetuating limited rights.

“Democrats need these issues to keep winning elections,” he said.

Even Democratic politicians at the top of the federal hierarchy are responsible for limiting LGBT equality, according to Schlein. He said President Obama could have easily repealed DADT when he had the support of a Democratic Congress during his first two years in office.

“He chooses not to repeal it, because he wants to enslave gay people,” Schlein said.

In addition to hearing some of the speakers at the convention, Schlein said he will also go to board meetings since he does sit on the national board of the Log Cabin Republicans.

Cooper said recently the number of supporters and members of Log Cabin Republicans have been increasing somewhat dramatically. The development of LCR candidates is an important issue the organization is tackling according to Cooper.

LCR members are developing relationships in the GOP, but also getting members to run, Cooper said.

“Our numbers are starting to grow as more people come out of the closet and more members start to become more supportive,” he said. “We are at a point in the organization where we have to say, ‘It’s just not enough to be visible. We need gay Republicans to run for office.’”

Ken Mehlman, former head of the Republican National Committee and campaign manager for President George W. Bush’s successful second run for president, will also be speaking at the convention.

And former Sen. Norm Coleman was a late addition to the event. Coleman, who served as a federal senator from Minnesota from 2003 to 2009, now works as an adviser to the Republican Jewish Coalition. He was one of three candidates in the highly publicized 2008 senate election in which the Minnesota Supreme Court handed down a ruling declaring comedian Al Franken the winner of the seat.

Coleman will not actually be at the convention, but has recorded a video message in which he welcomes all members of the GOP into the Republican tent.

Although originally listed as a speaker, Fox News correspondent Margaret Hoover will not be attending the convention. Cooper said her cancellation had nothing to do with the group’s social agenda.

Those interested in the event can register at Logcabin.org.

WHAT:
Log Cabin Republicans, the nation’s largest organization of Republicans who support fairness, freedom, and equality for gay and lesbian Americans is holding its 2011 National Convention, in coordination with the Liberty Education Forum’s National Symposium.

10:50am – 11:45am
Faith in America. Mitchell Gold speaks about his organization and book, “Crisis: 40 Stories of Growing Up Gay in America.”

3:15 pm- 4:00 pm
It Gets Better. Overcoming bullying and discrimination with Meg Ten Eyck of the Trevor Project.