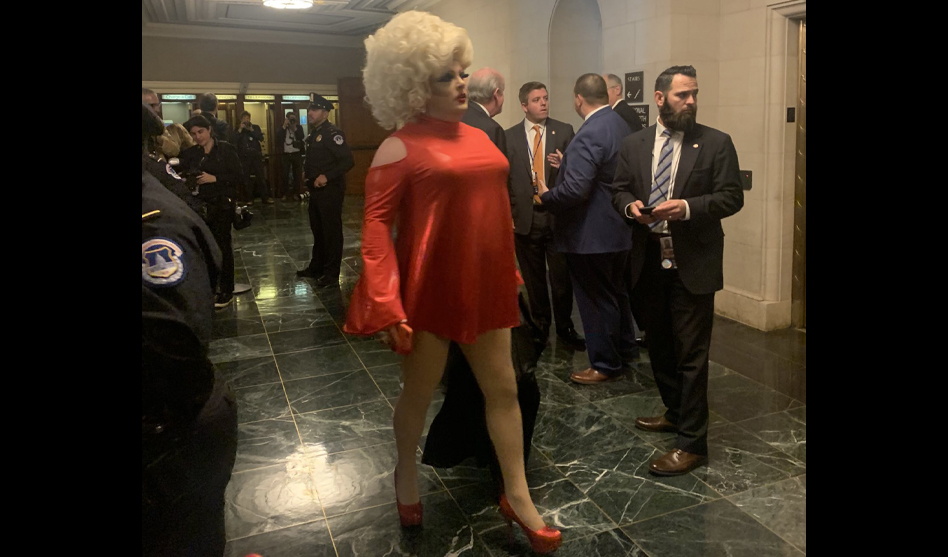 Heidi Przybyl tweeted out this photo of a drag queen, identified as Pissi Myles on New Jersey, apparently ready to attend the impeachment hearings in D.C.

D.C. — and Twitter and probably the whole internet — was all abuzz this morning as the official impeachment hearings began in Congress. But the real question on everyone’s mind seems to be, “So, who is “The Lady in Red”?

NBC News correspondent Heidi Przybyla tweeted out a photo of a statuesque blonde drag queen wearing a very short red dress and very high red pumps apparently getting ready to go into watch the hearing. She wrote, {Just arrived for #ImpeachmentHearings. Someone did ask me last night if there’s anything in DC that surprises me anymore. @JohnBrabender.”

There were some guesses: Rudy Giuliani (who did indeed get dolled up in blonde drag for a comedy skit with Trump some years ago), Lindsey Graham coming out in style, even Matt Gaetz, the Florida congressman known for having been stopped numerous times for speeding and, in 2008, having been arrested for drunk driving.

I’m gonna say I don’t think it’s any of those guys, because I don’t think any of them could look that good or walk that well in heels. And to whomever suggested it was “Trump in disguise” — girl, please! No way he could pull off that dress and those shoes!

There were a couple of really good “drag names” suggested: “Em Peach” and “Miss Trial.” But a couple of commenters claimed to have solved the mystery, saying that the Lady in Red is actually Asbury Park, N.J., queen Pissi Myles. The Daily Mail published a different photo with the caption, “Drag queen Pissi Myles, from from Asbury Park, N.J., was on Capitol Hill Wednesday in the hallway of the Longworth building as people awaited the arrival of the first two witnesses to testify before the House Intelligence Committee.”

And according to her own website, “Pissi Myles is an accomplished drag comedian, singer and hostess from Asbury Park, N.J. She is the cycle 4 winner of Philly Drag Wars and was voted Best Drag Hostess in Philadelphia at the Beacon Light Awards. In addition to her weekly shows in New York City, she continues to produce hilarious parodies, like her viral hit single Babashook. She’s performed at the legendary Wigstock and has been featured on Billboard, Cosmopolitan Magazine, Mic, Huffington Post, RuPaul’s What’s The T Podcast and more! You can find her at her many monthly and weekly shows and guest appearances throughout NYC, Philadelphia, Connecticut, and N.J.”

I still don’t know why Pissi was there on Capitol Hill this morning, but considering the rumors about Trump and Russian hotel rooms, I think her name is appropriate.