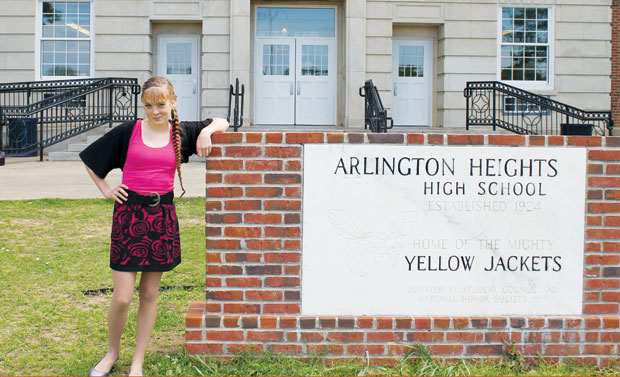 FILLING A VOID | Carina Terry, a freshman at Arlington Heights High School, started a Gay-Straight Alliance to address bullying, coming out and how to stop anti-LGBT sentiment from peers. (Anna Waugh/Dallas Voice)

FORT WORTH — When Carina Terry came out last year in middle school, she wasn’t sure how to talk about it with friends and family.

She wanted a space where she and other LGBT students could discuss problems they were having and help educate others to prevent people from calling fellow students “faggot” and using the expression, “That’s so gay.”

Now a freshman at Arlington Heights High School, Terry, 14, started a campus Gay-Straight Alliance in March. The group meets weekly to address bullying, coming out and how to stop anti-LGBT sentiment from peers.

LGBT advocates in Fort Worth said GSAs like the one at Arlington Heights are filling a void left by the district’s anti-bullying program, called the “It’s Not Okay” initiative, which they say doesn’t have a strong enough LGBT component.

Fort Worth ISD has had a fully LGBT inclusive anti-bullying policy since 2011. And the It’s Not OK, which recently made news when it was picked up by a national consulting firm, includes a video filmed by gay Fort Worth City Councilman Joel Burns.

But LGBT advocates have called INOK “window dressing.” Jon Nelson, president of the LGBT group Fairness Fort Worth, was heavily involved in making the district’s anti-bullying policy LGBT-inclusive in 2011. Nelson said no such policy can be effective without proper training of staff and reporting of incidents.

“Each one of those aspects is equally important. If one of those components fails, anti-bullying procedure fails,” Nelson said. “One of the ways to determine if this training and dissemination of information is effective is to ask the students.”

Nelson was invited to attend a training in the fall for school counselors and hasn’t been informed of any other trainings. He said LGBT-inclusive training needs to part of any program, instead of “some nebulous training that focuses on disrespect.”

Nelson also said the school district needs an LGBT liaison so questions about implementation and effectiveness of the school’s efforts “can become answers before they become problems.”

District defends initiative
The It’s Not Okay initiative, or “INOK,” targets multiple aspects of disrespect and ways to report it, including bullying, teen dating violence, sexting, suicide, sexual harassment and substance abuse, according to FWISD officials. The initiative started three years ago when employees working to end employee harassment decided to create a program for students.

New York-based Positive Promotions recently picked up the program for national distribution and the district will receive royalties based on sales. For example, the district would get a 20 percent royalty on sales up to $250,000. Kathryn Everest, guidance and counseling director, said the district will begin reviewing the materials with the company over the summer.

Everest claims students in GSAs didn’t want the INOK program to single LGBT students out, so it’s an all-inclusive initiative that aims to change the social norm that being different is wrong. And Everest said students can report incidents online or by text so they can help another student who isn’t comfortable reporting something.

Aspects of the program’s materials on monthly topics are LGBT-inclusive, such as suicide data on LGBT teens when bullying is discussed in classrooms, Everest said. The program began to target adults this year with a video all faculty and staff were shown on campuses during in-service days at the beginning of the school year.

Gay Fort Worth Councilman Joel Burns narrated the video for adults, showing that bullying and harassment isn’t acceptable at any age.

Everest said if a classroom needs more awareness, the training can utilize a Safe Space Kit from the national Gay, Lesbian Straight Education Network, or GLSEN. And while the adults don’t go through a formal training on the program, she said adults do undergo LGBT-inclusive diversity training.

“It’s about empowering kids on their campuses and getting them to promote respect,” Everest said of INOK.

‘I am who I am’
Terry felt empowered to create the GSA to tackle LGBT issues more closely. During the Day of Silence on April 19, she said students handed out cards with Bible verses on them condemning homosexuality and she’s been told she’s going to hell for being gay. Many more students were supportive on the day and Terry said they reported the cards to their GSA sponsor.

But the program hasn’t seemed to help much with religious intolerance and anti-gay slurs, so Terry said the club is thinking about making an INOK video to educate students on being LGBT.

Mary Noer, Terry’s mom, said she’s glad the district has a program like INOK but thinks the GSAs have been more successful in helping students because they’re student-led.

“No one wants their kid to be a target, but you want them to stand up for what they believe in,” she said, adding that her daughter has taken charge with the GSA to help protect LGBT students. “She won’t let herself be a target.”

Shana Saddler, 19, is a senior at Polytechnic Senior High School and helped start a GSA last semester with a group of students. She said the group’s discussion has focused on how to come out when parents have threatened to kick some kids out when they tried to tell them they were gay.

“I feel like there’s a lot of help needed for young kids. It’s sad to see kids that need help and don’t have anyone,” Saddler said. “I wanted us to come together as one and help them come out as who they are.”

Saddler said the INOK “helps a little but not as much as it should.” Even though teachers and parents receive pamphlets about the program, she said she wants the schools to do more to help parents accept their kids when they come out.

“I feel like instead of students being taught how to come out, the parents need to be taught to be accepting,” she said.

When students can’t come out at home, Saddler said they have a hard time coming out to strangers at school and defending themselves when they’re picked on for being LGBT.

Earlier this semester, a vice principal at her high school repeatedly made comments about her wearing masculine clothing and told her she was too pretty to be a lesbian. After telling him she didn’t like his comments, she finally reported it to the principal and the comments stopped.

Serving as a role model
Sharon Herrera, who’s openly gay, is a program specialist for FWISD’s department of student engagement. She was brought in several years ago to teach diversity and harassment training, but at the time there wasn’t an LGBT component because it was prior to the LGBT-inclusive policies.

“I think since it’s going national there needs to be some training component,” Herrera said of INOK.

“That would complete the package.”

But her position was eliminated in 2010 and she said there’s not an LGBT-specific training going on that’s she aware of. She echoed Nelson’s suggestion of having a district LGBT liaison like the Fort Worth police has to address concerns and help with training.

But teachers, students and parents still reach out to her about issues and how to start GSAs because she’s openly gay. She said there’s about seven GSAs in the district’s 15 high schools.

Herrera started Fort Worth’s community program LGBTQ Students, Administrators, Volunteers, Educators, Support, or LGBTQ S.A.V.E.S., in 2010 as a place for youth to feel safe. She said she was bullied in high school and thought about suicide and she wanted a place where youth could go to find help and resources.

The group planned a winter prom the last few years at Celebration Community Church and now has an end-of-the-year barbecue. She said the group has dozens of kids, many who attend from outside Tarrant County, like Burleson and Mansfield. She hopes to eventually create a Youth First Texas Fort Worth.

“I choose to be openly gay because of my personal story,” she said. “I want people to know I am here for them. I want to also be a role model for our LGBTQ students.”

This article appeared in the Dallas Voice print edition May 3, 2013.