It’s not always bigger in Texas 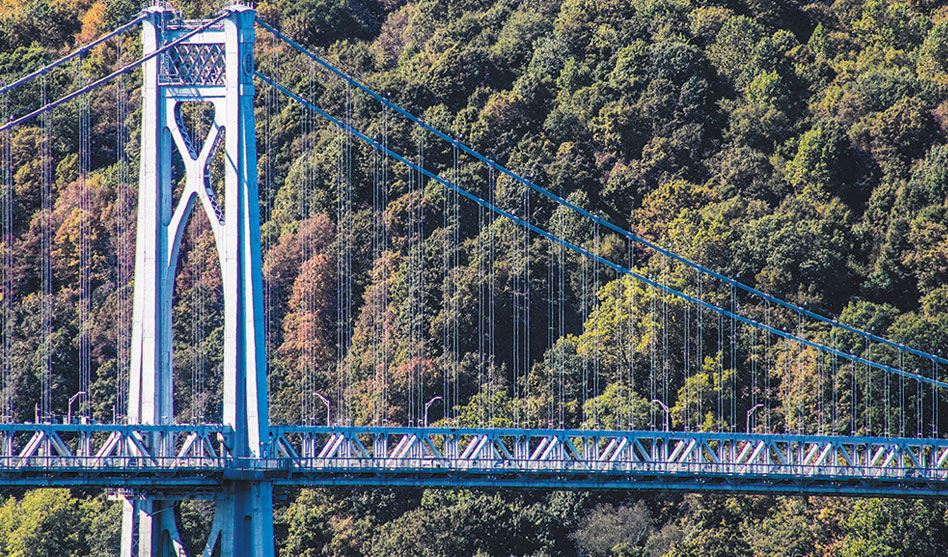 Did I mention I hate heights? Heights make my knees feel like jelly

After Dallas turned an old rail line into a park — the Katy Trail — it spawned imitators around the country. Among them is New York’s Rail Trail. When completed, it will stretch more than 700 miles. I walked one of the most magnificent couple of miles of Rail Trail just as the leaves were beginning to change color. 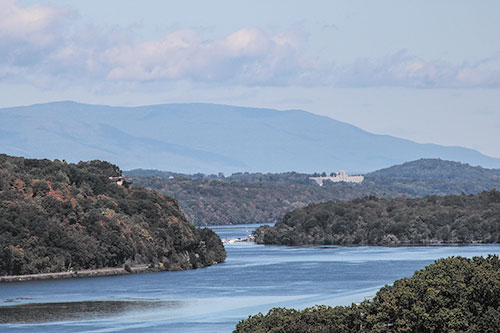 The Poughkeepsie-Highland Railroad Bridge, built in 1886, is the oldest surviving steel cantilever bridge in the world. And I was going to walk a mile-and-a-half over this rusting, 125-year-old span. (Did I mention how much I don’t like heights? I mean, when I look down from more than a story or two above the ground, my knees turn to jelly.)

And this bridge deck spans the waterway at a height of 212 feet above the Hudson River. That’s more than 20 stories in the air.

Completed and open to the public in 2009, Walkway Over the Hudson is stable and safe. The bridge was renovated, fortified and rehabilitated. Despite a wind blowing up the river that day, the path was solid and secure — no vibration; no swaying; no real reason to feel queasy.

The bridge is located 85 miles north of New York City in the foothills of the Catskills, and the surrounding scenery is rural. On the east side of the river is the historic town of Poughkeepsie. Park and enter the walkway at 61 Parker Ave.

On the west bank of the river, the walkway takes you to Highland, a town about 15 miles north of Newburgh and 15 miles south of Kingston. There’s plenty of parking close to the entrance to the walkway in Highland.

The most stunning manmade feature you’ll see is the Mid Hudson Bridge, just about a mile south of the walkway. But it’s the natural beauty of the mid-Hudson Valley that’s the real reason to visit.

The Hudson River was carved by a glacier just 13,000 years ago. On the west side of the river are the foothills to the Catskill Mountains, and on the east are the foothills to Massachusetts’ Berkshires. New York’s most majestic mountains, the Adirondacks, begin north of Albany more than 100 miles from the Walkway. These mountains near the walkway are just tree-covered, rolling hills in comparison. 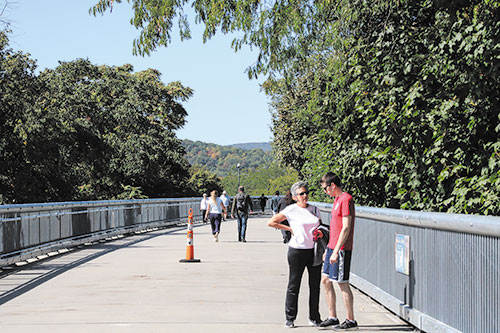 Fall is the best time to walk across the Hudson, because as the leaves turn colors, the hills turn magnificent yellows, reds and orange. On my last visit, the trees were just beginning to turn.

Why go? There’s really nothing else like it. At this crossing, the river is more than a mile across and continues to be navigable for another 80 miles, just north of the state capital, Albany.

Getting there: Take the Metro North commuter train from Grand Central Station to its terminus in Poughkeepsie or Amtrak’s Empire Corridor to Albany that stops in Poughkeepsie. The station is directly below the Walkway. Stewart Airport in Newburgh is the closest airport and is 25 miles from the Highland side of the Walkway. By car from either the north or south, take Route 9W.